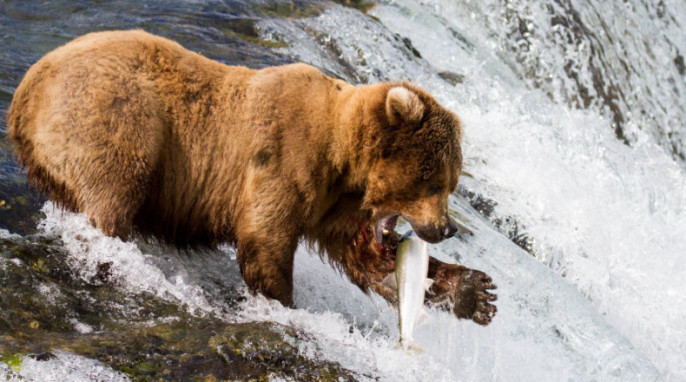 Up and coming wildlife photographer Max Goldberg describes his visit to Katmai National Park in Alaska to photograph grizzly bears.

Writing and Photography by Max Goldberg

After an eight-hour plane ride from Chicago, and a day to get over the jet lag, the first stop for my father and I on our week-and-a-half trip to Alaska was Brooks Lodge. Brooks Lodge is a camp in the heart of the Katmai National Park, and it is famous for two things: fishing and bears.

Upon getting off the float plane that got us to the Lodge, we were briefed on the area, the grizzly bears, and the basics of surviving an encounter with one. After setting down our clothes in our cabin, we grabbed the camera gear and began the 2.7 mile walk to the bear viewing area—a wooden platform about 10 feet off the ground from which to watch the bears on the waterfall.

It was definitely an eerie feeling walking around camp, and especially through the woods, because there could be a grizzly bear anywhere. Imagine two photographers in bear country, walking a narrow trail through a forest, without protection, and alone except a few rangers walking around. Over the course of our stay, we made that walk five times.  The first day there wasn’t much action since there were no salmon. But no one could prepare us for what would happen the next day.

Salmon and Grizzly Bears Among Us

The next morning we woke early and decided we would skip breakfast to get more time with the bears. We grabbed our gear and walked out of camp. When we had first arrived at Brooks, we saw a mother and two cubs on the beach, so we decided to go there first. We had stepped not five feet onto the beach before we spotted the mother and her cubs about 40 feet away walking towards us. Both my father and I were stunned. After getting a few photographs, we slowly backed up the path.

We made our way along the trail, but then got trapped alone on a wooden bridge with the mother grizzly bear and cubs at one end and a grey wolf at the other. After an adrenaline-filled five minutes, we made it to the waterfall. Before getting to the viewing platform itself, we noticed something: there were way more people and bears than the day before. It turned out that a pod of salmon had made it to the falls about three weeks earlier than the main salmon run.

My father and I set up the tripods and started shooting photos. Shutters were firing so fast it made it sound like we were in a war zone. Salmon were jumping everywhere. After about a half hour of shooting, it was easy to see the pattern of how the grizzly bears got their salmon. They would wait at the top of the falls or in the foam in the plunge pool, and just wait for a salmon to leap into their feet, or they would catch it with their mouth (often with the assistance of one of their big paws). My father and I stayed there all day, only breaking to hurry back to camp and eat some lunch. By the end of the day, one of the bears was catching the salmon just to eat the skin and the head (the fattiest part), and didn’t put much effort into catching them. It was quite comical to see the salmon hit the bear on the snout and the bear not even bothering to catch it.

The next morning, we set out to do the same thing as the day before, but when we arrived, there were no salmon. A few bears, but no salmon. My father and I had been extremely lucky with that pod of salmon the day before, since no salmon were supposed to be there that early. We got on a plane later that day (after seeing two grizzly bears run through camp), and headed back to Anchorage to start the next leg of our adventure. Stay tuned for more grizzly bears and other Alaskan wildlife.