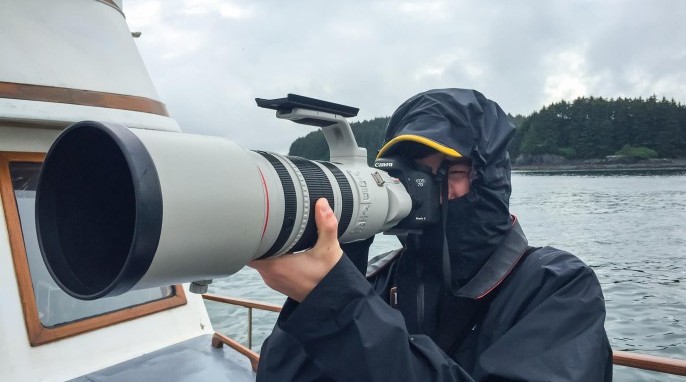 Hello! My name is Max Goldberg, and you may have seen multiple stories and photos of my adventures in Alaska last summer. As you read, you may be wondering, “How did he get those pictures? They have to be fake. Also, how do I get to Alaska? What gear do you recommend?”

Before we get into all that, I should give you a little background. First, you simply cannot just get up and go to wild Alaska, unprepared. Not only dangerous, but incredibly stupid. During the entire trip, my father and I were with a group led by a trained tour guide who not only had years of training and experience, but was also a fellow photographer. Next, wildlife photography is not for the impatient. Sometimes we would hop off our dinghy, hike for ten minutes, set all our gear down, and there would be a bear and her cub right there. Other times, we’d set our gear down and wait an hour or more for something to happen. This is not only true for bear photography, but for wildlife photography in general. Good things come to those who wait. Finally, be aware of your surroundings. There could be something amazing happening right behind you, and you might be too focused on something not as amazing in front of you. Granted, I was nervous most of the time that a bear was going to sneak up behind me, so I was constantly looking around, but you get the point.

Now that that’s out of the way, time to dive into how all the shots came to be. First, let’s talk about the equipment.

In total, we brought around 100 pounds of gear. For most of the time in the field, I had one of the 7D mark II on a tripod with the 200-400, the GoPro mounted on top, and the 7D with the 100-400 laying next to me on my bag. Whenever I was shooting with the 200-400, I used a tripod. Free-handing that lens all day would not only give you blurry shots, but would also wear you out.

Whenever we weren’t photographing animals or anything far away, I’d usually shoot with the 7D mark II with the 24-70. For carrying all of this, my father and I each had our own Gura Gear camera backpacks. By the end of the the trip, I had named mine Yoda, after how Luke in Star Wars carries around Yoda during his Jedi training.

Clothing and Other Gear

Along with the camera gear, we had to bring a whole different set of clothes from what we were wearing in the 90-degree heat back home. The standard outfit for me was zip-off pants, long sleeve athletic shirt, ISU sweatshirt, rain coat, boots, and waders. My favorite part of the outfit: the waders. Some people asked us when we got home, “Why were you wearing those weird-looking grey things?” For me, they had multiple different uses. In order to get on shore, most of the time the dinghy would pull up in about three feet of water. So, we’d carefully climb out and go ashore. Next, they trapped a lot of heat, which was great for me, since I’m always cold. Finally, they are very fashionable. When people think of Alaska, they usually think of snow and glaciers and minus-110-degree days. When we were there, the mornings were usually chilly, warming up to around 60 during the day, and cool during the evening. There was one day that it got up to around 68, which resulted in me walking around with only my waders, up to my hips, complete with a makeshift belt made out of bright yellow rope I found washed up on shore. My father said I looked like Huckleberry Finn. My editors are disappointed that there are no pictures.

So, you’re in Alaska, you have your tour guide, you have your camera ready, and there’s a bear right in front of you. How do you get the shot? I wish I had an exact answer. If you are somewhat good with a DSLR, photographing the bears grazing and just lounging around shouldn’t be that difficult. The tricky part is capturing the action. For example, the bears catching the salmon.

This photo was taken at 164mm (on the 100-400), f5.0, ISO at 1250, and at 1/5000. The biggest challenge for these shots was having a high enough shutter speed to “freeze” the action, but having the photo be bright. To add to the challenge, clouds were passing overhead, so we had periods of amazing light and periods when it was dark. We were photographing these bears all day, so once the settings were dialed in, all I had to do was shoot. So if you’ve shot sports before, this should be very similar. Nothing during this trip seemed too tricky to shoot. The hardest part was just being ready for anything. Once while we were photographing the mother and cub, the cub decided to run toward us, so close that I couldn’t shoot anymore with the 200-400. If I hadn’t had the second camera ready, I wouldn’t have been able to capture the close-up images of the bear cub like this one.

All in all, it was a unique experience. As a photographer who mostly shot high school sporting events prior to this, it wasn’t too tricky to get the “cool” shot. If you are looking to go on a similar trip, I would highly recommend Natural Habitat Adventures. My family and I have been on multiple trips with them, and have never been short of amazed. If you have any other further questions about this trip, the photos you’ve seen, or the gear I’ve used, feel free to contact me care of GotScience.