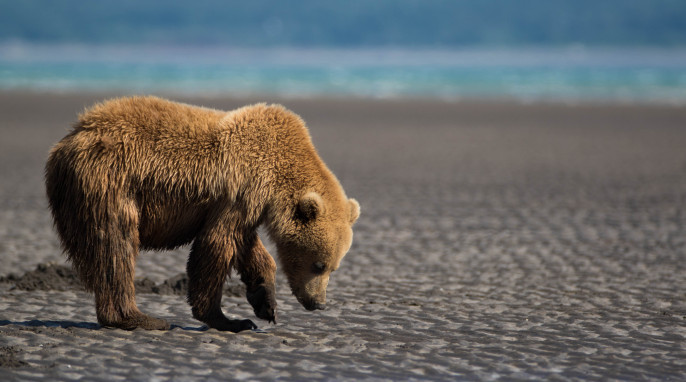 After some much needed rest, my group of photographers got back into the dinghy, and headed back towards shore. At this point, the tide had gone out and there were approximately 200 yards of beach that we had never seen before. We jumped out of the dinghy, and started to walk up the beach.

Once we put all our gear down, and set up our bucket chairs, we waited. Photographing wildlife involves a lot of waiting. Eventually, a mother bear and two older cubs came along. While the mother was walking around, the cubs decided they were going to have a little fun, and started to roughhouse.

As the cubs were playing, I noticed what the mother was doing: she was digging. Not only do bears eat berries, salmon, grass (as I learned the day before), but they also eat clams! I discovered that the bears sniff out where a clam is hiding and dig as fast as they can to grab the clam before it is buried deeper in the sand. Once the bears get the clam shell, they pry it open with their claws and eat the meat inside.

We watched the mother with her two older cubs clam and play, until we noticed we had more visitors on the beach!  A washed-up flounder had drawn the attention of another mother with three younger cubs that had been born that spring. Our cameras were bigger than the cubs! The mother grabbed the flounder (slightly out of my camera range) and helped her cubs eat it. Once they were done, the group came closer to us, but sat down in a submissive posture when they saw the other older cubs.

In Alaska, when the tide turns, it turns FAST. As we were sitting there, our feet began to feel cold because the tide was coming in. We packed up as fast as we could, hopped back into the dinghy, and made our way back to the boat for lunch.

Afterwards, our guide decided we should follow the mother with the three baby cubs for the rest of the day. So we got in the dinghy, and went ashore.

Our guide guessed at the general area where they would be; however, he was a little off. We could see them about a quarter mile away, but the tide had come in and we were stuck on a little island. So we settled in, and waited. The group decided to take pictures of the flowers that were around us, but I decided to play in the driftwood and trash. All of a sudden, there was a fox. I turned around, and there it was; just hanging out by the camera gear.