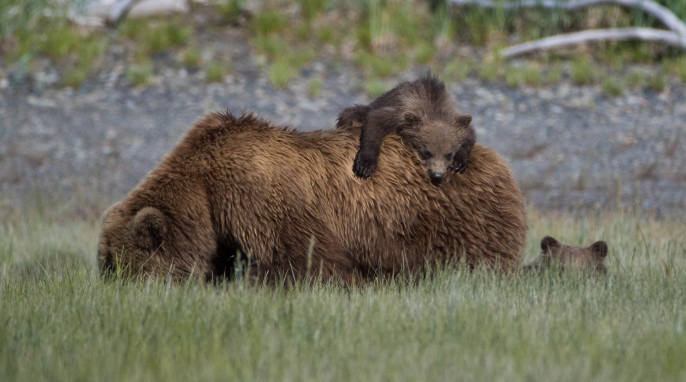 Visit the Alaskan wilderness with wildlife photographer Max Goldberg as he photographs a violent event in the grizzly bear community of the Kenai Peninsula.

After crossing a river in our waders, we found the mother and three little cubs on the bank of another river.  We set up our cameras and tripods and watched the little cubs climb over their mother and goof off, getting shots of the raw cuteness.

Now, we were sitting in a large open marshland, with hungry male bears all over the area–not where a mother of three new–born cubs should be. Yet, there she was, happily eating grass.

It is, in fact, very difficult for a mother to raise two cubs, let alone three. Statistically, if a mother has three cubs, one will not make it into adulthood. Also, this bear (according to our guide) was obviously a first time mother, as she brought her cubs to what some may consider “the bad part of town.”

Sure enough, the mother soon sensed trouble. A big male had started to wander a little too close for her liking and, in order to create more distance between her cubs and the male, she crossed over to our side of the river. Of course, the male followed.

After about five minutes of being trailed, the mother struck a submissive pose, hopeful that the male would just go on his way. However, he continued his approach.

Defense obviously wasn’t working that well for the mother, so she switched to offense. She got up from her submissive pose and stared down the male. The cubs, not really knowing what was really happening, got on top of her.

The male bear turned around and started walking away. The mother bear sat back down, but still kept a watchful eye on the male.

At this point, everything happened very fast (the rest of this narrative covers perhaps only 15 minutes). The male had got about 50 feet away when the mother charged. The male, realizing the mother was a lot tougher than he thought, backed off and ran away. But the drama wasn’t over…

A second male entered the scene, slightly bigger than the first. The first male, let’s call him Male 1, approached the mother and cubs again and with every step closer, the mother got more and more tense. Eventually, the mother charged at him, and slammed into the side of his head. The male was almost twice her size, yet she packed a powerful punch.

The two kept fighting, with the cubs about 20 feet away. Camera shutters were firing like mad all around. However, what the mother didn’t notice was that Male 2, had arrived. He could have cared less about the mother because she wasn’t what he was after: he was after the cubs.

Now, during all this the cubs were all together. However, when Male 1 approached they ran away and this caught Male 2’s eye, and he started to sprint towards the cubs. The mother saw Male 2 sprinting towards the cubs and she ran over to try to save them, but it was too late: Male 2 had gotten one of the cubs. At this point, I stopped shooting.

So, the mother gathered the remaining two cubs, and ran towards towards the woods. After the mother ran off, Male 1 approached Male 2, stole the cub from him, and proceeded to eat it.

However, her running only got the attention of more males in the area, and she was chased all the way to the woods. At one point, we thought there was another fight, but we couldn’t tell since they were so far away. From what we could see though, it appeared both the mother and two remaining cubs made it back to the woods safely.

It was a long quiet walk back to the dingy that night, as no one wanted to talk about what they just saw. The tough part was that we had followed that family around all day and gotten attached to them. However, we reminded ourselves that we were in the wild of Alaska: this was all part of nature.

The next morning we went back out to the flats, and we were all happy to see Melissa and Fitz again, our favorite grizzly bear mother and cub.