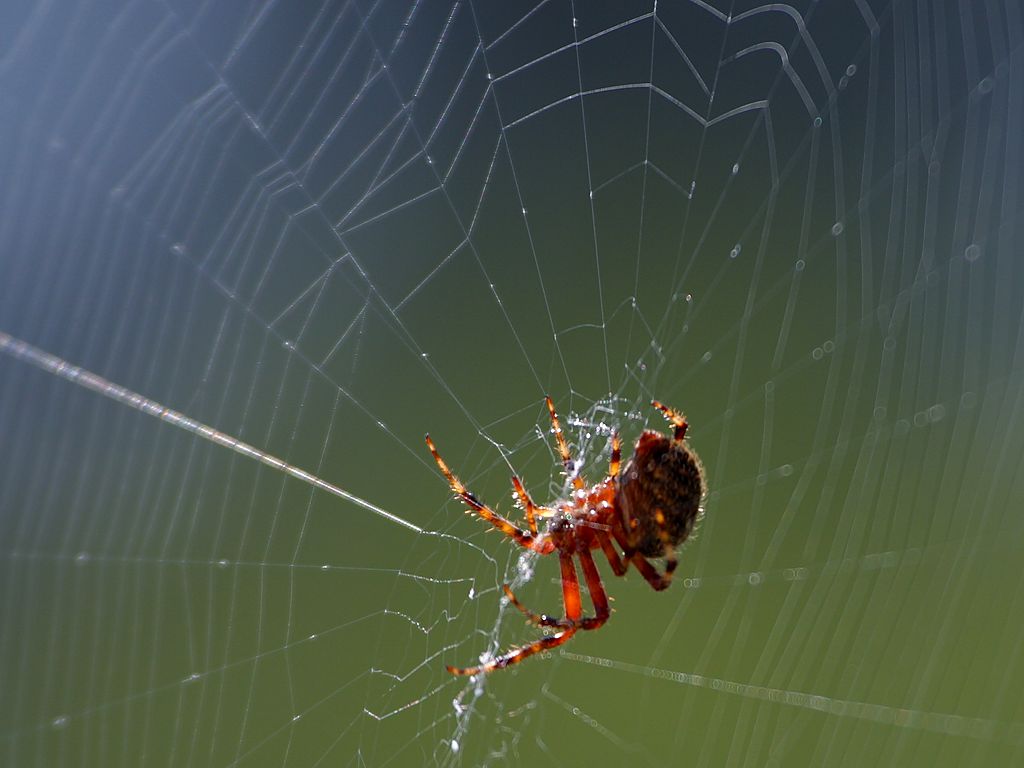 The webs of spiders come in many shapes and serve many functions, like helping them hunt prey and hide from predators.

Are you afraid of spiders? I don’t blame you. The spider “embodies the Terrible Mother’s gruesome mysteries of death and dissolution . . . . [I]mages of her terrors are reinforced by the spider’s killing or paralyzing its victims with venom from hollow fangs, and the female’s habitual devouring of the typically smaller male after mating” (Ronnberg, 2010).

Despite their reputation as killers and creepy things, spiders are often more friendly than fearsome. While it’s true that there are a few species that pose a real danger to humans—the black widow and the brown recluse, for example—most just seek a humble existence.

House spiders eat common pests, such as flies and mosquitoes. This can help curb diseases and also make a home more pleasant. In the wild, they help control insect populations, as well as other spider populations. In addition, they’re an essential food source for predators like birds, lizards, and small mammals.

Though spiders have plenty of differences, ranging from habitat to size to preferred meal, they all have one thing in common: They just want to get a good meal and avoid getting squished. To achieve that goal, spiders weave webs. And they’re not the only web-weavers out there, and one of them in particular may surprise you.

Spiders are arachnids, which are a class of arthropods. Other arthropods include lobsters, crabs, scorpions, and insects, as well as the extinct trilobite.

Spiders all have eight legs, no wings, two body sections, and an exoskeleton. All spiders produce silk, although not all of them use this silk to spin webs. Additionally, many spiders produce venom, which they use to kill or subdue their prey, or to defend against threats. Besides their venom, some spiders have hunting strategies such as cocooning prey in silk.

Attached to the spider’s abdomen are organs called spinnerets, which produce silk. Spiders have between two and four spinnerets; most have three. Some spiders have a cribellum, which produces a type of segmented silk. The silk fibers, each about 10 nanometers thick, surround thicker core fibers. These fibers are quite useful for ensnaring prey.

Spiderwebs are architectural and geometric masterpieces. To fulfill their purpose, they must be flexible and sturdy, and just sticky enough. Since there are 117 families of spiders—more than 45,000 different species—there are plenty of different webs out there, too.

The orb weaver spiderweb is crafted in a way that not only allows it to capture prey but also to maintain structural integrity. The web must withstand the pressure of insect landings and the strain from escapes.

Some spiders of the genus Uloboridae form more triangular versions of the orb web. Unlike other spiders, Uloborids do not have venom. Instead, they constrict their prey using silk, sometimes hundreds of meters of silk at once. Then, the spider covers the prey with digestive fluid and liquefies it. The spider then eats the prey, along with the silk cocoon. They never actually chew the food.

Spiders from the genus Agelenidae build funnels (giving these creatures the nickname “funnel weavers”). Most spiders in this family construct a horizontal web that leads back to a funnel or hole, in which the spider can hide out and wait for prey. Many of these spiders prefer to hide their webs under rocks, logs, or foliage, though a few species in Australia dwell in trees.

When an insect lands on the horizontal part of the web, the spider can rush out of the hole and inspect the potential prey. If it is prey, the spider can bite it, inject its fast-acting venom, and then drag the subdued insect back into the funnel for a meal. The funnel not only offers safety to the spider but also prevents other insects from realizing that danger may be lurking nearby.

Sheet web spiders, mainly from the family Linyphiidae, also weave large, horizontal webs. Depending on the spider, the web may be flatter or rounder. However, these webs do not have funnels for the spiders to retreat to. Instead, these tiny spiders wait upside-down underneath the web for prey to appear. When prey is spotted on top of the web, the spider bites through the silk, grabs the prey, and pulls it underneath for a meal.

The wispy, barely noticeable webs that you stumble through in dark basements or in dense vegetation are formed by spiders from the families Theridiidae and Dictynidae. (Theridiidae mostly live indoors, while Dictynidae prefer outdoor environments.)

Theridiidae build their webs at night, first exploring the area where the web will be built. Unlike the neat patterns of the orb weaver or the expansive net of the funnel weaver, Theridiidae seem to weave without much thought to appearance. Instead, they seem to focus more on finding a space that is easy to fill, then filling it with structural and gum-footed lines (the sticky elements of the web). Their aim is not aesthetics, but an architecturally sound structure. Web shape, size, and structure vary greatly between different species of Theridiidae.

Dictynidae webs differ from Theridiidae webs in that they are constructed outdoors, and typically do not have overhanging protection. For example, a Theridiidae web may be built in the top corner of a room, which provides shelter on three sides. But a Dictynidae web would more likely be built on leaf litter or between branches.

The silk we wear comes from silkworms, the caterpillar of the domestic silkmoth. As the name suggests, the silkworm has been domesticated for its ability to produce silk, so they mainly rely on humans for successful breeding.

Surprisingly, these insects also produce silk. Honeybees, bumblebees, bulldog ants, and weaver ants each use silk for a different purpose. Interestingly, for each of these species, the silk is produced by only in the larval stage. Honeybee larvae use the silk to strengthen the wax cells in which they develop, bumblebee larvae spin cocoons within the wax hives, and bulldog ant larvae use the silk to make cocoons during their pupal stage. Adult weaver ants use the larvae (and by extension, their silk) as tools to fasten leaves together and create communal nests. Hornet larvae also create a silk cocoon before their pupal phase.

Also known as Pinna nobilis, the fan mussel is now threatened with extinction because of its silk production and other environmental factors, such as increased pollution. It uses its silk, which is strong in keratin, to attach itself to rocks.

Yes, goats. For some reason, scientists at the University of Wyoming genetically modified goats to produce spider silk.

Shayna Keyles is a staff journalist and publicist for Science Connected, a non-fiction editor, and an explorer of all things.