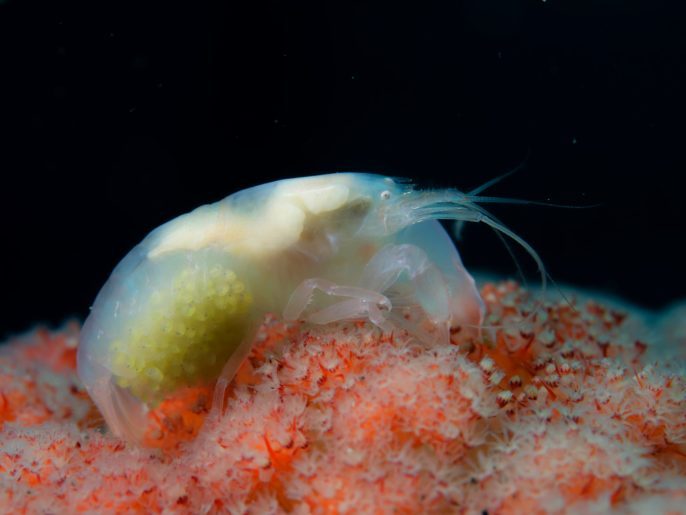 Researchers at the University of Alberta have discovered the evolutionary path that snapping shrimp took to evolve their trademark snap.

By using computer modeling and 3-D printing and mapping evolutionary trees, researchers at the University of Alberta have discovered a possible evolutionary pathway that shows how snapping shrimp have evolved to “snap.”

Snapping shrimp, also known as pistol shrimp or alpheid shrimp, compete with whales for the title of loudest animal in the ocean. To make noise, snapping shrimp are able to close their claws incredibly fast, which shoots a stream of water so quickly that new water from above doesn’t have time to replace it, creating a vacuum bubble (called a cavitation bubble). The collapse of that bubble causes an audible snap, which sends out shock waves that are powerful enough to kill small fish that the shrimp can then eat.

But how have these shrimp evolved to have this remarkable ability? It seems improbable that evolution would even allow this to occur, and yet, the powerful snap has evolved independently in two different shrimp families. “All we’ve known until now is the endpoint of these super snapping claws,” says Rich Palmer, biological science professor at the University of Alberta. “What we now know is that a series of small changes in form led to these big functional changes.”

Shrimp (infraorder Caridea) are incredibly diverse. There are many families and species of them, including two families of shrimp with the ability to snap. Researchers studied 114 species of shrimp from 19 families located all over the world and looked closely at the claw joints to see how they worked. What they found was that there are only very subtle differences between the claws of snapping and non-snapping shrimp.

RELATED: HOW THE MANTIS SHRIMP PACKS A POWERFUL PUNCH

The researchers identified a few different types of joints, most notably a previously undiscovered slip joint. In a regular pivot joint, the finger of the claw, called the dactyl, moves up and down because of opening and closing muscles inside the claw, similar to a hinge on a door. In a slip joint, however, the dactyl pivots up to a certain point and then slides onto a ridge, where it is held open (or “cocked,” as Palmer calls it). In this case, the fulcrum, or the place where the dactyl connects to the rest of the claw, changes as the claw slides. This new understanding of the slip joint helps explain how the claw is able to close so fast.

A slip joint doesn’t always mean the shrimp can snap. It turns out that shrimp need some sort of energy storage system in their muscles for increased speed. And many shrimp have just that—a special muscle configuration where part of the muscle used for closing the claw is placed above the fulcrum (the place where the dactyl connects to the claw and rotates). This means that as the closing muscle contracts, it cannot pull the claw down; it is merely gaining elastic energy while another smaller portion of the muscle placed below the fulcrum is pulling it down.

This seems like the claw would never close, if we think about the physics—after all, a stronger muscle is pulling the dactyl the wrong way. But remember the slip joint? The smaller muscle only needs to pull until the dactyl shifts off the ridge on the claw, which then changes the angle of the fulcrum, causing the full muscle, complete with elastic energy, to engage and snap the claw shut. The research team named this feature the reverse-torque cocking joint, and they have seen it in multiple species of snapping shrimp. In fact, they found it is the secret to snapping.

The difference between a regular slip joint and a snapping (or torque-reversal) slip joint is subtle; the only difference is the placement of the dactyl-closing muscle. In a regular shrimp, it is below the fulcrum, and in a snapping shrimp, part of the muscle is above the fulcrum. This suggests that these snapping joints could have evolved from regular slip joints, which would have evolved from a pivot joint. The researchers mapped these characteristics onto known phylogenies (evolutionary trees) and found that the results supported their hypothesis.

“We realized that this spectacular ability to break water by making cavitation bubbles had to have been preceded by maybe millions of years of shrimp just shooting water. Somehow as they continue to shoot water, they got faster and faster, and they eventually broke the cavitation threshold to produce these snaps. It’s pretty extreme biology,” Palmer says. This study suggests that a tiny difference in a structure can cause a substantial difference in form.