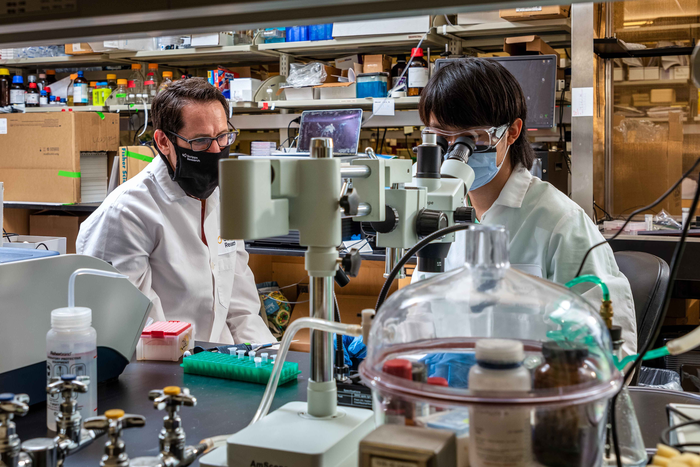 Brain cholesterol levels may be the key to understanding and treating Alzheimer’s disease, according to a new study.

Most people have heard of cholesterol. Your doctor may have told you that you need to lower your cholesterol, or you may know someone who takes a cholesterol-lowering medication. High cholesterol is generally a concern because it can cause heart attacks and stroke. However, new research suggests it may also play a role in a disease that affects an estimated 5.8 million Americans: Alzheimer’s disease.

Alzheimer’s disease, also called AD, is a devastating disease that damages a person’s cognitive functions in everyday life. It is neurodegenerative, which means that people with AD experience increasing damage to their nervous system over time. They may lose key memories of their lives, become unable to navigate their surroundings, forget who their loved ones are, and have uncontrollable changes in their personality. Recent scientific advances have resulted in treatments that can slow some of the symptoms of AD. However, the Mayo Clinic reports that, on average, people will still not survive more than 11 years after diagnosis. AD generally strikes people after the age of 60, according to the CDC, but younger people can also develop early onset forms of the disease. There is a strong genetic link to who is affected, as well.

One key biological sign of AD is amyloid beta, also called Aβ, accumulating in the brain. Aβ is a piece of a larger protein called APP. Aβ is naturally produced in the brain and is involved in the normal signaling of neurons. However, in people with AD, Aβ is overproduced. Too much Aβ creates clumps, also called plaques. Aβ plaques are considered one of the most consistent features of AD seen in autopsies of patients. Another protein called tau is also increased in people with AD. This protein accumulates in a set of clumps called tau tangles. According to the National Institutes of Health, tau normally helps different parts of the neurons receive nutrients. However, in AD, excess tau blocks communication between neurons.

Aβ is produced through complicated molecular pathways that scientists still do not yet fully understand. However, there may be an important link to brain cholesterol. In the brain, cholesterol is produced by cells called astrocytes. Astrocytes are a type of cell called glia. While neurons send the electrical signals that underlie human brain functions, glial cells support the neurons. They provide nutrients and help ensure neurons can communicate with each other. It is astrocytes, rather than neurons, that create cholesterol in adult brains. Cholesterol in the brain is separate from cholesterol in the rest of the body, and it is essential for healthy brain function. Brain cholesterol is particularly involved in maintaining a protective covering known as myelin, which is required for many neurons to send signals efficiently.

Related: How a Special Smell Triggers a Memory

Brain Cholesterol and You

Brain cholesterol affects brain cells through a set of interactions with other proteins. It is transported by a protein known as apoE to the neurons. After cholesterol is transported by apoE, it collects with other molecules called lipid rafts. Lipid rafts, with cholesterol and apoE, interact with APP, the larger protein containing Aβ. Changes to the gene coding for apoE are commonly seen in AD, particularly one called an E4 variant. A problem in any part of this pathway could cause the brain to produce too much Aβ, leading to plaques.

Due to brain cholesterol’s role in producing Aβ, scientists at Scripps Research Institute hypothesized that increased cholesterol in the brain might be to blame for too much Aβ forming. Cholesterol could be the step where things go awry, especially since high cholesterol has also been found in people with AD. This, along with the apoE E4 variant connection to AD, led them to suspect that interactions between these molecules might underlie the plaques seen in AD.

The interactions of lipid rafts, apoE, and cholesterol, occur at very small scales and have been difficult to study. The molecules are too small to view with a light microscope. However, the researchers in this study were able to use a combination of animals and advanced microscopy to test their hypothesis. To accomplish this, they used mice that were genetically engineered to produce too much Aβ, leading to Aβ plaques in their brains. Using an animal that has been modified to mimic a disease state is known as using a model. By mimicking the disease state, and then introducing some sort of change, researchers can tease out what may be causing the disease in humans. These mice, called 3xTg-AD mice, were used as a model of Alzheimer’s disease. Using additional genetic engineering, the researchers also turned off the cholesterol production in the astrocytes of these mice to see how this affected their Aβ plaques.

The researchers found that, when astrocyte cholesterol was turned off, Aβ levels became normal. The Aβ plaques disappeared. The researchers also looked at the interactions of apoE and cholesterol in the cells, by adding cholesterol to a form of apoE that did not produce cholesterol. They found that the apoE variant may be increasing how APP binds with cholesterol and lipid rafts, which then could lead to excessive and harmful Aβ production. Interestingly, tau tangles were also no longer present in the mice brains. While the molecular link between tau and brain cholesterol was not the focus of the study, this result suggests that brain cholesterol affects both of the harmful protein clumps that are key features of AD.

Identifying increased cholesterol as the culprit in Aβ plaque formation may be key to developing more effective treatments. Unfortunately, this does not mean that treating AD is as simple as finding a way to stop human astrocytes from producing cholesterol. Neurons need cholesterol to stay alert and perform normal brain functions. The same researchers highlighted this in a previous study. They found that cholesterol reduction created by anesthetics can result in unconsciousness. So, it appears that the brain does need cholesterol, but too much of it may be related to AD. Researchers will need to figure out how to decrease harmful levels of brain cholesterol, without removing it completely. This study does, however, help steer scientists in the right direction. Scientists first must better understand what molecular processes drive the Aβ plaques that seem to cause the harm seen in AD. Eventually, this can be used to create better treatments to help people with this disease, or possibly prevent it altogether.

This study was published in the peer-reviewed journal Proceedings of the National Academy of Sciences of the United States of America (PNAS).

National Institutes of Health: National Institute on Aging. (2017, May 16). What happens to the brain in Alzheimer’s disease? https://www.nia.nih.gov/health/what-happens-brain-alzheimers-disease

Elisabeth Moore lives in Providence, RI with her cat Callie. She completed a PhD in neuroscience at the University of Minnesota in 2019, studying how the brain perceives visual stimuli and learns to see over time. She now manages the creation of plain language summaries for clinical trials and other patient-centered communications of scientific and technical information. Her overall goal is to become a full-time medical and health communications writer. Outside of work and writing, she enjoys camping, hiking, and riding her motorcycle through New England. Connect with Elisabeth on Twitter or Facebook.