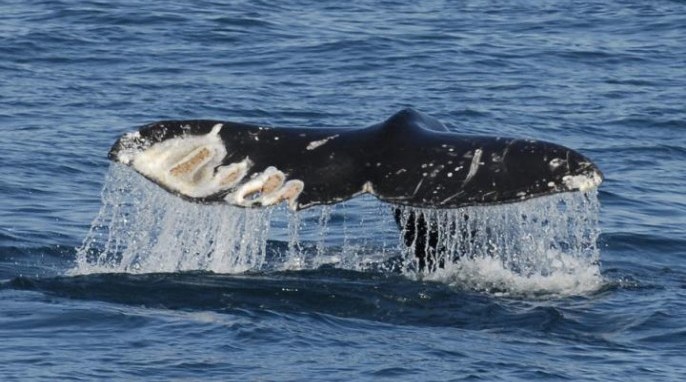 When marine mammals surface for air, they are frequently struck by seagoing vessels. In addition, with maritime transport accounting for approximately 90 percent of world trade, the noise made by all those ships may disrupt the navigation of whales and other marine mammals. Besides noise disturbance and fatal strikes, shipping impacts on marine wildlife include introduction of pathogens, fuel spills, and invasive species into the water; habitat destruction through anchoring, especially on coral reefs; and pollution of the air. The Wildlife Conservation Society (WCS), working with researchers and practitioners from public organizations and private companies, is in favor of a plan to protect marine animals from collisions with ships and other environmental degradation caused by shipping.

Professionals and academics from the National Oceanic and Atmospheric Administration, the U.S. Coast Guard, SpaceQuest, Google, and SkyTruth have reviewed a maritime vessel communication and navigational safety system that could help protect people as well as marine wildlife such as whales, walruses, and other sea mammals. But can shipping companies be persuaded to use this system?

The International Maritime Organization adopted the Automatic Identification System (AIS) in 2000 to survey coastlines and help ships avoid collisions. AIS now has 16 years of data about global marine vessel traffic, and this data could be used to prevent collisions between ships and marine mammals. “AIS now provides a rich source of data to understand vessel traffic across the entire globe—even in the most remote areas of the open ocean,” says Martin Robards, director of WCS’s Beringia Program. “This system also has the potential to help us minimize the negative effects of shipping on wildlife.”

“The AIS can become a vital tool in helping to protect whale and other marine mammal species, particularly in locations such as the Arctic where shipping is potentially on the increase,” adds Howard Rosenbaum, director of WCS’s Ocean Giants Program. “AIS can be used to identify regions where shipping lanes and important marine mammal habitats and migrations overlap, as well as areas where ocean noise may be impacting acoustically sensitive species.”

How Does AIS Work?

AIS works by continuously transmitting information about vessel positions, headings, and other data to a network of receivers. The system was designed as a marine navigation tool, not as a conservation tool; however, the system data enables users to understand and mitigate the impacts of maritime traffic on the marine environment and wildlife. Proponents of the system say that it can be used to identify places where large marine mammals and vessels are likely to collide—a critical step to understanding and reducing vessel strikes. Of course, there is still much room for improvement.

“Effectively conserving our vast oceans will require technological leaps and cross-sectoral collaboration. This important review articulates the potential promise of both in the use of big data from vessel tracking systems such as AIS as well as local applications for critical habitat and threatened species,” says Caleb McClennen, executive director of WCS’s Marine Conservation Program. “As increased ship traffic begins to congest an increasingly ice-free Arctic, the conservation sector must capitalize on tools such as these to protect its currently pristine seas.”

This research appears in a recent edition of the Bulletin of Marine Science. It has been supported by the Oak Foundation, the Pew Charitable Trusts, and the Aleutian and Bering Sea Islands Landscape Conservation Cooperative (ABSI LCC).

Featured image: A grey whale with scars on its tail flukes, possibly the result of a collision with a marine vessel.