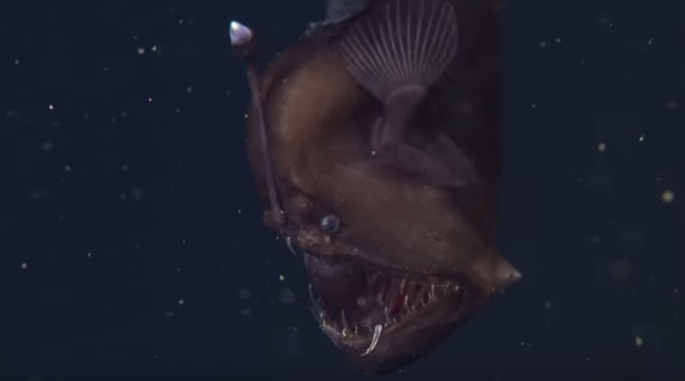 Dr. Joe delivers another terrific It’s OK To Be Smart video, and we are excited to share it with you. Meet eight of the freakiest deep sea creatures.

We know more about some other planets than we do about the deepest corners of Earth’s oceans, and the species we’ve found there are almost alien. Here’s some of the most unbelievable deep sea creatures ever observed! Special thanks to the Monterey Bay Aquarium Research Institute (MBARI) for help with this video!

If you want to learn more about deep sea creatures, don’t miss this article about a team of researchers from the University of Hawaii at Manoa who have captured a glimpse of what abyssal ocean life is like atop a deep sea mountain. About 75% of the ocean floor is “abyssal,” or between 3,000 to 6,000 meters below the sea’s surface. And far below the Himalayas, Rockies and Sierra Nevada that we know are “abyssal seamounts,” or mountains with summits 3,000 meters below the ocean’s surface.

There isn’t much food in the deep ocean, and many species that far down in the ocean naturally avoid light and noise, so the team used baited camera stations to make their observations. Cameras, as opposed to traditionally used research vessels, can remain unobtrusive, while baited stations mimic how animals in the abyss typically find their food: by scavenging large chunks of dead sea animals that sink to the ocean floor.

Abundant and strange life has been found living on deep sea mountains.

There is a two-way relationship between the oceans and the climate.

Marine mammals need a voice in the fishing industry.

Find out where huge, yet elusive, blue whales go to breed.