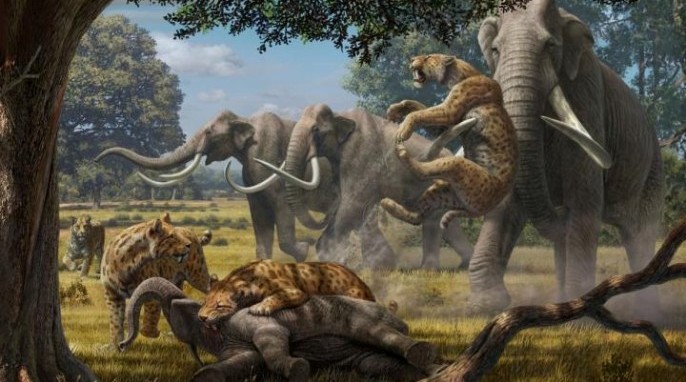 For years, evolutionary biologists have wondered about the ecosystems of the Pleistocene epoch. How did so many species of huge, hungry herbivores, such as mammoths, mastodons, and giant ground sloths, not wipe out the plant life? Observations of modern elephants suggest that large concentrations of those animals could have essentially destroyed the environment, but they didn’t.

Now, life scientists believe that the ecosystem was kept in balance by predatory carnivores that kept the population of large herbivores in check. Scientists have found fossil evidence of intense, violent attacks by packs of some of the world’s largest land carnivores. Packs of lions—much larger than modern lions—and saber-toothed cats hunted the giant plant-eaters.

What Can We Learn About Conservation?

This research could have implications for animal conservation efforts today. After all, many of today’s endangered species evolved during or before the Pleistocene epoch, and under very different conditions from what we see today.

“Recreating these [Pleistocene] communities is not possible, but their record of success compels us to maintain the diversity we have and rebuild it where feasible,” the researchers say.

The research team found that ancient carnivores, because of their larger size, were able to hunt young mammoths, mastodons, and other species, preventing those animals from destroying ecosystems in the Pleistocene, which ended about 11,700 years ago.

“Based on observations of living mega-herbivores, such as elephants, rhinos, giraffes, and hippos, scientists have generally thought that these species were largely immune to predation, mainly because of their large size as adults and strong maternal protection of very young offspring,” says Blaire Van Valkenburgh, a UCLA evolutionary biologist.

Previously, scientists thought that the populations of mammoths, mastodons, and giant ground sloths were limited through evolution by changes in reproductive timing in response to shortages of resources such as food and water. However, it is now becoming clear that biodiversity was responsible for the delicate balancing act between predators and prey.

Today, large predators not only keep herbivore populations in check but also benefit their ecosystems by providing carcasses that feed an array of smaller species. The same was true during the Pleistocene, when keeping mega-herbivore populations in check meant that there was more vegetation for smaller mammals and birds. The predators might even have had indirect effects on river ecosystems, because the banks of the rivers were not being denuded by mega-herbivores and were less likely to erode.

These findings were published this week in the journal Proceedings of the National Academy of Sciences.