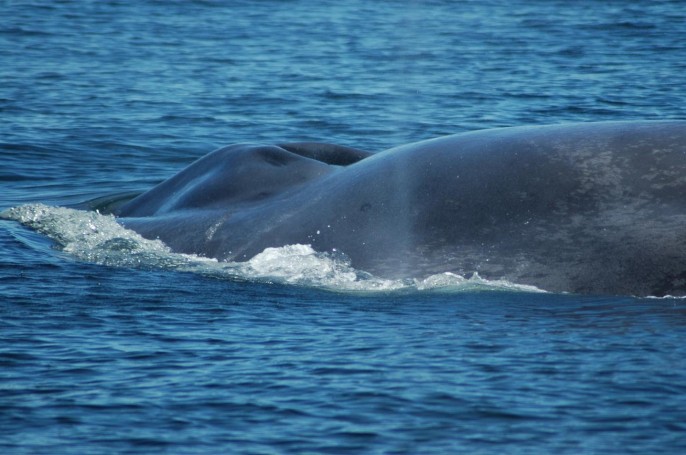 Blue whales are the largest animal on Earth, yet the breeding grounds of these elusive creatures remained a mystery for a long time…until now.

Scientists studying blue whales in the waters of Chile through DNA profiling and photo-identification may have solved the mystery of where these huge animals go to breed, according to a recent study by the Chile’s Blue Whale Center/Universidad Austral de Chile, The National Oceanic and Atmospheric Administration (NOAA), and the Wildlife Conservation Society (WCS).

Read about other whales species, such as the magnificent humpback whale.

The researchers have been tracking a female blue whale they call Isabela. The whale has traveled at least once between Chile’s Gulf of Corcovado and the equatorial waters of the Galapagos Islands (a suspected blue whale breeding ground), a distance of more than 5,000 kilometers. Isabella’s journey represents the largest north-south migratory movement ever recorded for a Southern Hemisphere blue whale.

The researchers are recommending that nations work together to establish areas where blue whales are protected in their travels. “Efforts to protect blue whales and other ocean-going species will always fall short without full knowledge of a species’ migratory range,” says Juan Pablo Torres-Florez of the Universidad Austral de Chile and the Blue Whale Center.

Isabela is at least 82 feet in length and may weigh up to 100 tons. “The discovery of Isabela traveling between southern Chile and the waters of Ecuador is important and very timely as we work to promote the recovery of the largest species to ever inhabit the earth,” adds Dr. Howard Rosenbaum of WCS’s Ocean Giants Program. “The movement of this one whale provides important information that will enable us to look further at these important areas for blue whales with goal to ensure their long-term protection.”

Seeking to establish links between populations of blue whales in the Gulf of Corcovado and other regions, researchers in the eastern South Pacific examined DNA collected from the skin of blue whales with small biopsy darts fired from crossbows. The team also used data from sightings and photographs in their attempt to connect individual animals to different locations.

The analysis produced a genetic match between a female whale observed and sampled off the coast of southern Chile in the summer of 2006. The same whale was sampled by NOAA scientists in the waters of the Galapagos eight years earlier.

The researchers tell us that blue whales are frequently observed in the equatorial Pacific, just west of the Galapagos, and that further study might confirm the location as a wintering and breeding ground for at least some of the blue whales of southern Chile.

Reaching nearly 100 feet in length, the blue whale is believed to be the largest animal that ever existed. Blue whales were nearly hunted to extinction by commercial whaling fleets before receiving international protection in 1966. At birth, a blue whale calf can measure between 23 and 27 feet in length and weigh almost 3 metric tons.

The study entitled “First Documented Migratory Destination for Eastern South Pacific Blue Whales” is published in the journal Marine Mammal Science, and can be accessed here.

Top Image: Isabela surfacing to breathe in the waters of Chile’s Gulf of Corcovado (Courtesy of Rodrigo Hucke-Gaete/Blue Whale Center)