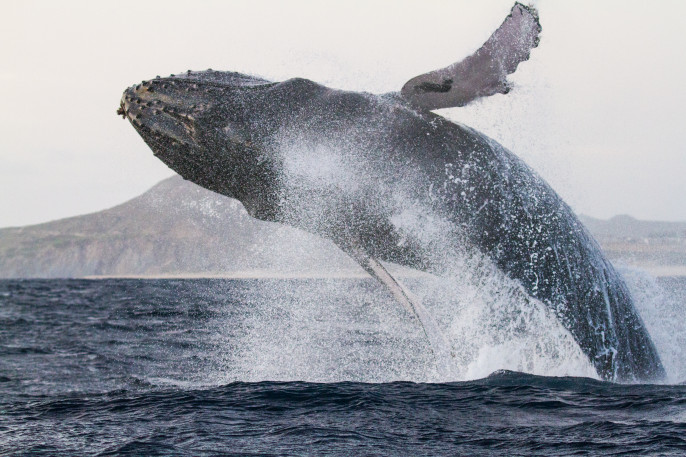 Following the adventurous Alaska trip my father and I took last summer, for winter break my family and I traveled to Baja, specifically Baja California Sur. For those who slept during world geography, Baja is the little pointy area south of California and west of Mexico. Baja is well known for its wildlife.

Seeing the whales is one of the biggest attractions here. Many whale species, including humpbacks, grey whales, blue whales, and right whales migrate to Baja and other warm waters in the winter to mate and give birth. In the summer, the whales migrate north toward rich feeding grounds off the coast of Alaska.

One evening, we set out to find some humpback whales breaching off the coast of Los Cabos.

We got in the whale-watching Zodiac and headed out toward the area where the humpbacks would most likely be. Ours was one of several boats in the area, so we looked for other wildlife while we waited for news of a whale sighting to come over the radio. The smell that wafted over the boat as we drew closer to a rock could mean only one thing: sea lions.

While we were watching the sea lions, a call finally came over the radio that a whale had been spotted. The boat turned around, and we practically flew to the sighting.

When we got there, we saw nothing.

Five minutes after that, not only were we wet and cold, but still saw nothing.

Finally, after what seemed like forever, a whale was spotted! The boat was brought closer, the cameras were readied, then suddenly this massive animal leaped out of the water with what seemed like no effort at all.

Nothing too spectacular at first. But after that first breach, the whale continued to leap out of the water, higher and higher.

Then all was quiet again. Another 10 minutes went by without a whale. At some point around this time, a wave broke over the boat and soaked my sister. Of course, while I was making fun of my sister instead of paying attention to the water, a whale breached about 50 feet away from the boat. When the whale hit the water, the sound was as loud as a gunshot.

Another whale surfaced on the other side of the boat, so we all turned around, and this time I was ready for the whale to breach. I closed my eyes for a moment and held my breath, hoping to capture the image of this enormous animal leaping above the waves. Then the whale launched itself clear out of the water and didn’t let go of the camera shutter.

Finally, I got the shot I was hoping for. It isn’t exactly what I would have liked, but I’m still very happy with it. Such is life, as well as wildlife photography.

We continued to follow and photograph whales for the rest of the evening until we ran out of sunlight. All in all, it was a borderline ridiculous experience to see these magnificent, massive animals of the sea so closely and see how powerful these gentle giants really are.