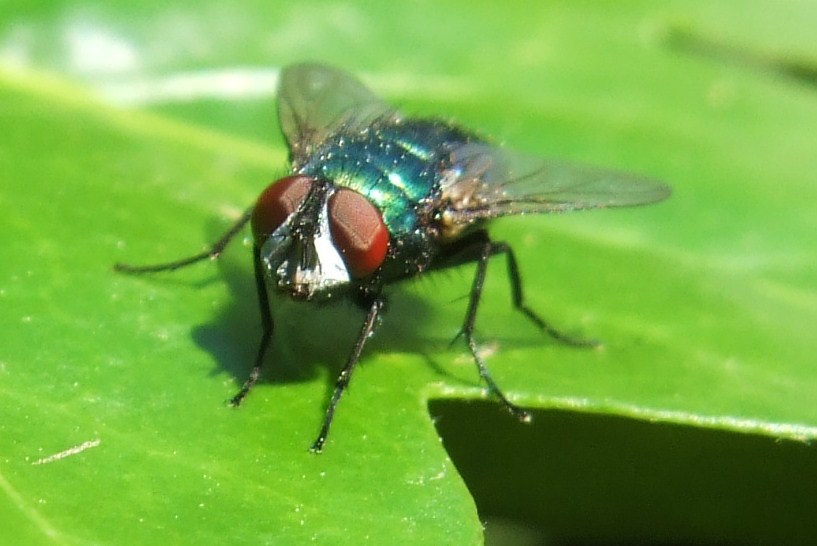 Banana essence. Apple cider vinegar. Almond jelly dessert. Mentsuyu. These are just some of the smells tested on flies in Hokto Kazama’s lab—you might recognize the last one as the soy sauce-based broth in noodle soup. These smells and more are processed in a part of the fly brain only slightly bigger than half the width of a human hair. (We’re talking about fruit flies here, not house flies, so everything is even smaller than you imagined.) What goes on in the antennal lobe, as it’s known, is very similar to activity in the human olfactory system, according to Kazama—of the RIKEN Brain Science Institute—because the wiring is essentially the same in flies, people, and species in between. To probe this activity scientists use—what else?—a virtual reality smell arena. (Sadly, this does not involve fitting flies with miniature VR goggles.) More than 80 different odorants can be piped into the arena in sequence. All the fly has to do is, well, fly, which it does held in place with a short tether. If it likes a smell, it will stay in the odor plume; if not, it will veer off. Whether the fly is making an aesthetic choice is up for debate, but the behavior—attraction or aversion to smells—can reveal a lot about the nature and speed of the fly’s reactions to its environment.

Welcome to the Smell Arena

To human eyes, the experimental fly arena might appear to be a very primitive flight simulator. LEDs create vertical green stripe patterns that shift according to the fly’s navigation, giving the flies (and the human experimenters) an idea of “straight ahead.” When the fly is enclosed in the experimental box with only infrared light to illuminate it, there’s no other visual stimulation. What there is, however, is an abundance of smells. Delivering a controlled battery of odors to a fly while simultaneously tracking its behavior and brain activity is one way neuroscientists are trying to decipher the neural code: the way sensory information is represented in the brain and how it contributes to decision-making. For researchers including Kazama, the motivation to crack this code is that it may reveal universal patterns of information processing that would allow prediction of outputs such as preferences or actions.

The fly’s decision making, at least as it relates to smells, is powered by many of the 50 or so brain cell bundles, called glomeruli, in the antennal lobe. Previously, people thought flies only use input from two or three glomeruli for smell-based decisions. The overlap in smell space is actually much larger: Kazama and colleagues found that an odor was registered by, on average, eight glomeruli, and a given glomerulus responded to around 20 odors. This was achieved using a microscope and a method called calcium imaging, where fluorescence in different brain regions indicates neural activity in response to smells.

With the flies’ neural activity in hand, the researchers next looked at how it matched up with the odor preferences. The output from the glomeruli correlated very linearly with the smell scale derived from the flies’ behavior. This correlation became a central part of a mathematical equation to decode the brain activity associated with smells. The authors tested this idea with various smell mixtures and were actually able to predict whether flies would stay or leave the odor plumes, even for completely new smells. “A complex environmental sensory cue like smell is encoded across a big population of neurons,” says Kazama, “but it is actually transformed into action in a fairly simple way by the fly brain.”

RELATED: HANDSHAKES MAY ENGAGE OUR SENSE OF SMELL

The mathematical equation was further supported by an experimental manipulation, zapping one of the glomeruli with a laser, also known as optogenetics. Brain cells genetically engineered to be light sensitive can thus be switched on or off at will. The researchers could bias the fly to be attracted or averse to certain smells by activating individual glomeruli with light. The bias was actually minute; previously neutral smells could be nudged up or down the smell scale. Flies also contextualized the smells. “The flies’ odor preferences were affected by other odors in the set,” says Kazama. “This means that perception is not absolute; it’s relative.”

Flies can also make smell judgments incredibly fast. To determine a fly’s direction, the researchers used miniature microphones to listen to the wing beats. A difference between left and right wing sounds indicated turns, which were especially sharp and quick for unpleasant smells. Flies needed only 200 milliseconds from first getting a whiff of a smell to change course.

The flies’ overwhelmingly favorite smell? A sweet and fruity solvent found in bananas and pineapple, 2-pentanone, is their favorite. Benzaldehyde, the almond-like smell of the jelly dessert mentioned at the beginning, while pleasing to humans, is one of the most aversive for flies.

Learn More About the Power of Smells

Genetics Behind Lavender’s Popular Scent: The scent of lavender is loved by humans and insects alike, but what makes lavender scent so attractive? A group of scientists decided to find out.

How a Special Smell Triggers a Memory: Does the smell of freshly baked cookies make you think of your grandmother’s house? Neuroscientists call this an associative memory.

To Sea Turtles, Ocean Plastic Smells Like Food: Sea turtles may eat plastic found in the ocean because it builds up a layer of microorganisms and smells the same as their food, a new study finds.

Can You Smell Handshakes? Why do people shake hands? A Weizmann Institute study suggests one of the reasons for handshakes may be to discretely sniff each other.

A version of this article originally appeared in Neurographic.

—Amanda Alvarez is a science writer living in Japan. She received her PhD from the University of California, Berkeley. Connect with Amanda @neuroamanda.