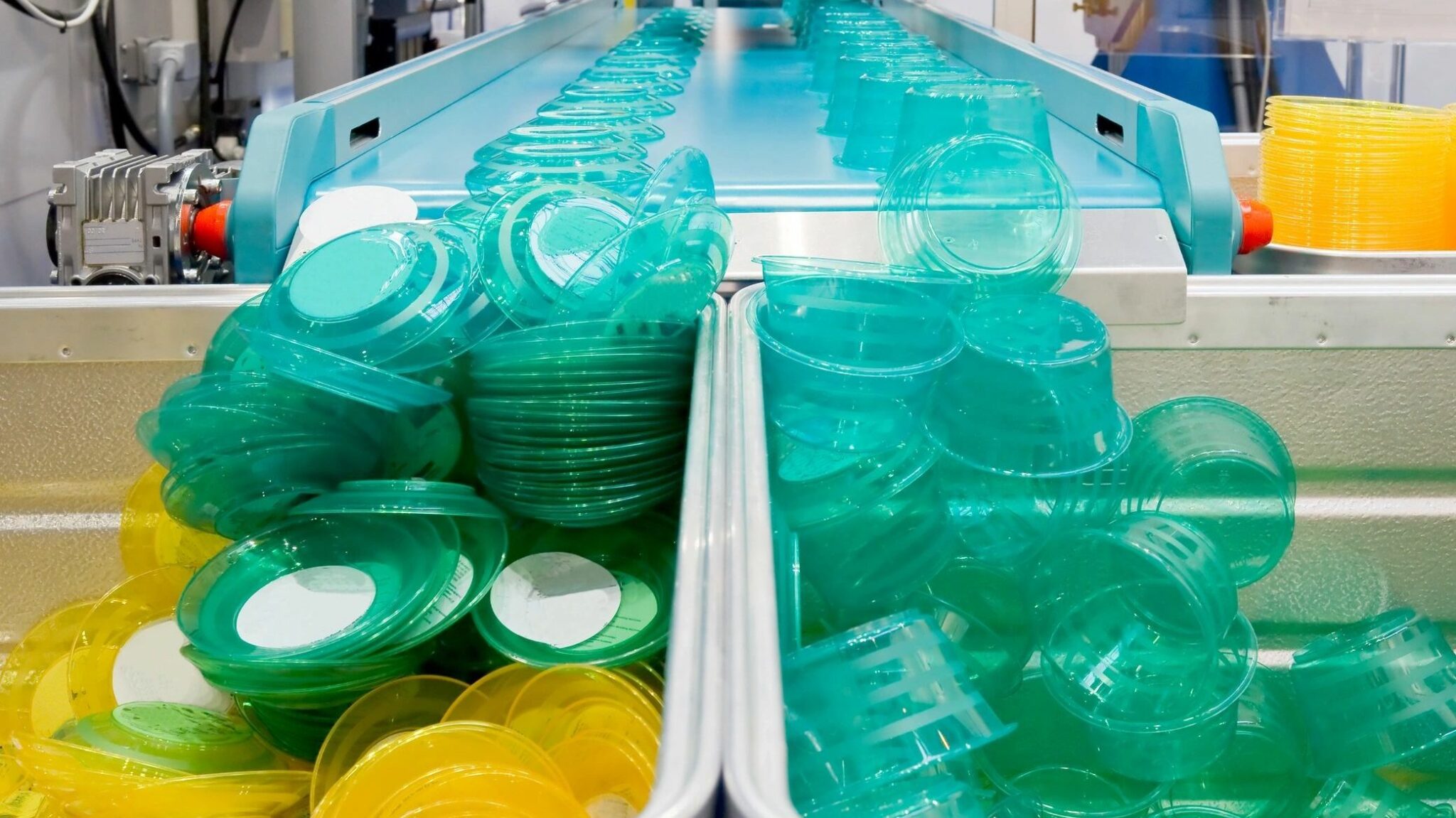 Countries around the world, both developed and developing, have been grappling with growing piles of plastic waste from overuse of packaging materials, such as those for food and beverages, and single-use plastic tableware. In 2015, 42 percent of all plastic produced was used for packaging, much of which is used only once and then tossed, according to a 2017 study published in Science Advances.

Concerns have been growing among scientists, environmentalists, policy makers, and the public as reports emerge of marine life ingesting plastic litter or becoming entangled in discarded plastic fishing lines. When plastics break down into smaller particles, known as microplastics, they are ingested by filter-feeding organisms such as mussels and oysters. Microplastics have also been widely found in both coastal and freshwater fish, impacting part of our food supply and posing a potential threat to human health.

The amount of plastic waste in the Great Pacific Garbage Patch, located between California and Hawaii, was estimated in 2018 to be 16 times higher than previous estimates—and historical data indicates that it is rising exponentially in this area compared to surrounding waters.

Shipping out plastic waste no longer an option

Until 2018, many developed countries, including the United States, Canada, and Australia, conveniently shipped their plastic waste to China for recycling. But with China burdened by its own growing plastic waste and in a bid to safeguard its environment, the country announced in early 2018 that it would stop importing plastic waste.

Southeast Asian countries that quickly became alternative dumping destinations for plastic waste are now cracking down on illegal imports. In May of 2019, Yeo Bee Yin, the Malaysian Minister of Energy, Science, Technology, Environment and Climate Change, declared that illegal containers carrying 3,000 tonnes of non-recyclable plastic waste would be sent back to the countries they came from. She urged developed countries to “stop shipping garbage to developing countries,” stating that “Malaysia will not be the dumping ground of the world.” Similarly, Cambodia announced in July that it would ship back 1,600 tonnes of plastic waste to the United States and Canada, with an environmental spokesperson stressing that “Cambodia is not a dustbin.”

As a result, governments and recycling companies in developed countries are struggling with the task of tackling the growing menace of what was once hailed as a wondrous material. Awakened to the gravity of the situation, national and local governments have banned plastic bags or applied levies. But clearly, a lot more needs to be done to turn the tide against plastic pollution and find long-lasting solutions.

Role of producers in plastic waste

Apart from governments regulating consumer consumption patterns, there are growing calls to put the onus on plastic-producing companies to pay for or provide physical services for the collection and recycling of their products, conduct cleanup of the mess already created, and improve product designs. Such policies, where producers are held accountable until the post-consumer stage of the product life cycle, are known as extended producer responsibility (EPR). EPR has been implemented by policy makers to embrace a circular economy, where products are not disposed of at the end of their life cycles as in a linear economy but instead recycled, or in some cases even upcycled into something more valuable.

EPR, which first emerged in Sweden in the 1990s, is a tool that incorporates mandatory, negotiated, and voluntary measures by producers. EPR is more prevalent in the European Union and North America, although it is gaining traction in Asian, African, and Latin American countries as well.

Bottle deposit schemes introduced through container deposit legislation (CDL) have been widely used by governments as a strategy to control plastic pollution. They often require producers—in most cases multinational corporations—to pay for the collection and recycling of beverage containers and bottles. Such schemes have been implemented mainly in developed countries including Canada, the United States, and Australia. Sometimes producers choose to transfer the costs to consumers in the form of refundable cash deposits. But some questions remain unanswered: Are these schemes effective in reducing marine litter dumped along coastlines? And do cash incentives in terms of cash refunds of deposits play a significant role in reducing litter?

A 2018 study published in Marine Policy attempted to answer these questions by conducting marine debris surveys in states on the coasts of Australia and the United States and comparing regions with and without container deposit policies. Led by Qamar Schuyler, a research scientist at Australia’s national science agency, the Commonwealth Scientific and Industrial Research Organisation, the study revealed that in both the United States and Australia the proportion of containers found in coastal debris surveys was on average 40 percent lower in states with CDL than in those without this legislation. And the reduction was greater in lower-income areas, which often suffer from higher debris loads, as opposed to higher-income areas. The cash refunds have the effect of making containers, which would otherwise be worthless, a commodity. “It is like finding money on the ground. You would pick that up, even if you wouldn’t pick up a candy wrapper. So if a beverage container is worth money, people will be more likely to pick them up, or not discard them to begin with,” Schuyler tells Science Connected.

Vito Buonsante, plastics program manager of the Canadian advocacy organization Environmental Defence, says that Canada’s province British Columbia has a deposit return scheme run by producers, which yielded a high recycling rate of 82 percent in 2016. He explains to Science Connected that “targets can easily be met by increasing the deposit.”

While such incentives have been shown to reduce littered containers in coastal areas of developed countries, Schuyler suggests investigating whether this would also be the case in developing countries, noting that “in developing countries there are often already informal sector activities (e.g., trash pickers) that remove ‘valuable’ items of litter. In some countries the value of an item comes from its material value, which may already be high relative to other items of trash even without a cash incentive scheme.”

One of the elements of EPR providing incentives to producers to increase recycling of materials. A 2018 study published in the Journal of Cleaner Production found that the implementation of EPR policies for managing packaging waste in two European late adopters—Spain and Portugal—has had a positive impact on achieving their goals of promoting recycling and recovery activities. The recycling rates for paper, glass, plastic, and metals in both countries have increased throughout the years and in most cases exceeded the 2008 EU targets (22.5 percent for plastic) for all materials.

For this study, researchers interviewed the staff of two packaging recovery organizations in Spain and Portugal, Ecoembes and Sociedade Ponto Verde respectively, which are responsible for collecting, sorting, and treatment of municipal waste. Both organizations receive a fee from packaging producers, who have transferred their responsibility for recovering and treating packaging to the organizations. “Such fee is determined according to the number (quantity, volume, weight) of packaging material they put into the market,” Sergio Rubio tells Science Connected. Rubio is the lead author of the study and an associate professor at the University of Extremadura, Spain.

Despite the promising findings, Rubio’s team says that EU recycling targets for 2025 are extremely demanding (55 percent for plastic, for example) and that some challenges need to be carefully addressed. “One of them is that only considering packaging material recyclability is not the direction to follow,” says Rubio. He suggests that “a life cycle analysis, LCA, (from design, to production, to transportation, to consumption, to disposal or recycling) should be used to assess the eco-design of each packaging material.” Such an analysis could aid in the development of policies that would encourage more environmentally friendly packaging, he adds.

Buonsante stresses that the success of EPR in solving the plastic problem will require higher collection and recovery targets. He explains with this example: “If a producer of plastic bottles pays for managing a recycling system but collects only 30 percent of the bottles, what happens to the remaining 70 percent? They get to landfills, pollute the environment, get littered, and finally the cost goes back to the community.”

And although EPR policies are more expensive to manage, Buonsante says that both EPR and bans are needed, arguing that “bans can help reduce plastics or shift the markets towards existing innovative products.” Giving the example of polystyrene, which is used widely because it is cheap, he says that bans can spur the shift to the “best affordable option.”

Ultimately, a combination of EPR and bans will be a long-term solution to the plastic waste crisis.

—Neha Jain is a freelance science writer based in Hong Kong who has a passion for sharing  science with everyone. She writes about biology, conservation, and sustainable living. She has worked in a cancer research lab and facilitated science learning among elementary school children through fun, hands-on experiments. Visit her blog ​Life Science Exploration​ to read more of her intriguing posts on unusual creatures and our shared habitat. Follow Neha on Twitter ​@lifesciexplore​.

This article is part of a series funded by a grant from Science Debate. “Given the many urgent scientific and technological challenges facing America and the rest of the world, the increasing need for accurate scientific information in political decision making, and the vital role scientific innovation plays in spurring economic growth, we call for public debates in which the US presidential and congressional candidates share their views on science and technology, health and medicine, and the environment.” —Science Debate

CM Consulting. (2018). “Who pays what? An analysis of beverage container collection and costs in Canada. Retrieved from https://www.cmconsultinginc.com/wp-content/uploads/2018/10/WPW-2018-FINAL-5OCT2018.pdf

Latiff, R. (2019, May 28). Malaysia to send 3,000 tonnes of plastic waste back to countries of origin. Reuters. Retrieved from https://www.reuters.com