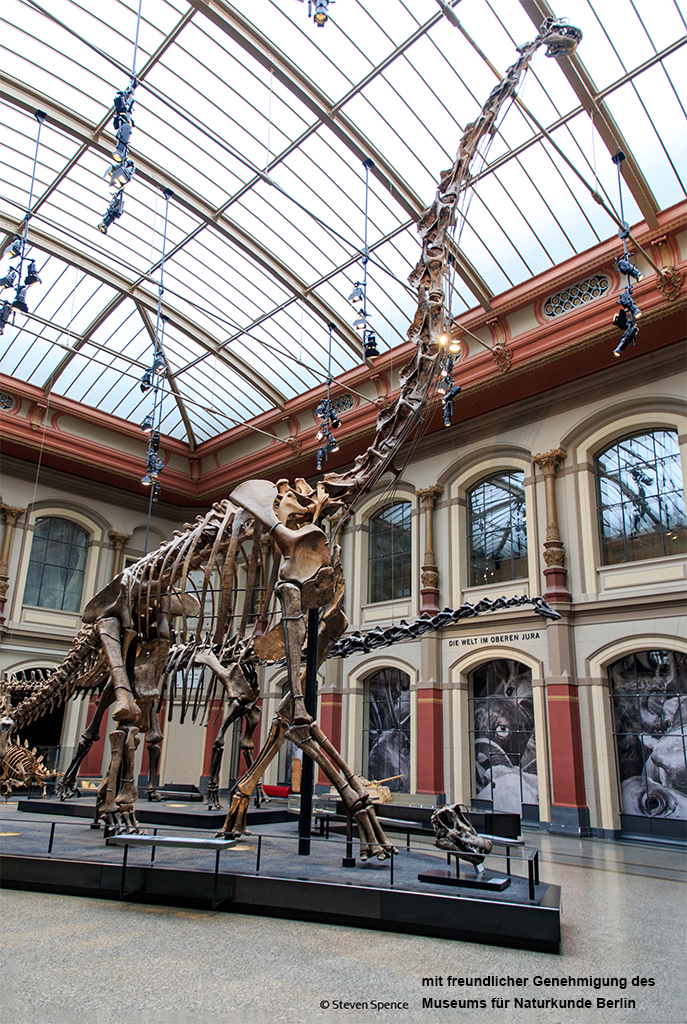 Sauropods were the largest land animals ever on earth, and many different species of them lived close together, so how did they all find enough food for their dinosaur diets? Fortunately, research from the University of Bristol and the Natural History Museum, London can answer this question.

Sauropods, large, long-necked plant-eating dinosaurs such as Diplodocus and Brachiosaurus, lived between 210 and 65 million years ago. The biggest weighed in at 80 tonnes (more than 11 elephants) and ate a lot of plants.

Despite their massive veggie appetites, multiple sauropod species often lived alongside each other. For example, remains of 10 different sauropod species have been found in the Late Jurassic Morrison Formation in the western United States.

So how did so many giant animal species live close together and find enough food for everyone? The researchers used biomechanical measurements from different sauropod species to figure out how their jaws worked. The results show that while that early sauropods ate a wide range of plants, over time they evolved increasingly specialized diets. These specialized diets enabled many sauropod species to live close together. Each species specialized in eating a particular plant or a particular part of a plant.

Using CT scans, the researchers digitally reconstructed the skulls of the sauropods Camarasaurus and Diplodocus, along with the jaw and neck muscles of both species from the traces left on the bones where these muscles were attached in life. These two species are very common in the Morrison Formation, and are known to have widely co-existed. Researchers then used the data to build a biomechanical computer model of the skull of Camarasaurus was built a modeling technique often used in engineering and design to calculate stress. This model was then used to investigate how the dinosaurs fed.

“Our results show that although neither could chew, the skulls of both dinosaurs were sophisticated cropping tools,” lead author David Button of Bristol’s School of Earth Sciences explains. “Camarasaurus had a robust skull and strong bite, which would have allowed it to feed on tough leaves and branches. Meanwhile, the weaker bite and more delicate skull of Diplodocus would have restricted it to softer foods like ferns. However, Diplodocus could also have used its strong neck muscles to help it detach plant material through movements of the head. This indicates differences in diet between the two dinosaurs, which would have allowed them to coexist.”

Emily Rayfield of the University of Bristol adds, “In modern animal communities differences in diet such as this – termed ‘dietary niche partitioning’ – allow multiple similar species to coexist by reducing competition for food. Although, dietary niche partitioning has been suspected between Morrison Formation sauropods based on their structural features and patterns of tooth-wear, this is the first study to provide strong, numerical, biomechanical evidence for its presence in this fossil community.”

The research, funded by the Natural Environment Research Council (NERC), is published in Proceedings of the Royal Society B.

The Case of Malignant Cancer in a Dinosaur– Did cancer kill the dinosaurs? A deformed dinosaur bone has given a glimpse of life as a 77-million-year-old cancer “survivor.”

Did Plant-Eating Dinosaurs Have Cheeks?– An animal’s anatomy can tell us a lot about how it lived, including how it moved, how it ate, how it breathed, and just about any other physiological process involving morphology.

Shelf Life Video: The Dinosaurs of Ghost Ranch– Dinosaurs’ fossils have attracted paleontologists to the Badlands of Ghost Ranch, NM, since 1881. Here, they have found the best place to find early carnivorous dinosaurs in the world. This video is another in the Shelf Life series from the American Museum of Natural History.

Which Dinosaur Gave Rise to Tyrannosaurus Rex?– What dinosaur was the ancestor of the mighty Tyrannosaurus rex? Which dinosaur gave rise to this famous lineage?

Dinosaur Fossils of Ghost Ranch– In more than a century of fossil collecting, paleontologists from the American Museum of Natural History have unearthed fossils from every corner of the globe. But there are some sites so fruitful in dinosaur fossils that they are visited again and again by the Museum’s fossil hunters, with each generation turning up new and unexpected finds. One of those sites is New Mexico’s Ghost Ranch, home to four quarries that paleontologists from the Museum have excavated for decades.

Friendly Neighborhood Raptor Dinosaurs– Raptor dinosaurs large curved talons on the second toes of their feet. A similar feature is seen on some modern raptors such as eagles and hawks. Would you like to know why?

Paleontologists Digitally Restore Dinosaur Fossils- Fossils are usually crushed or incomplete when they are found. Millions of years can take a toll, after all. Consequently, fossils have to be studied very carefully to avoid damage and sometimes they are hard to access. Now, an international team of scientists has found a better way to examine delicate fossils and reconstruct their original forms.

Featured photo: The huge, mounted Giraffatitan in the main hall in Berlin, dwarfing the Diplodocus that stands behind it. (Photo by Steven Spence. All rights reserved.)