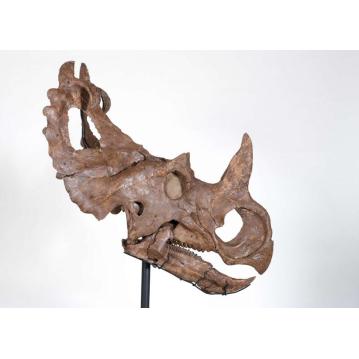 Did cancer kill the dinosaurs? A deformed dinosaur bone has given a glimpse of life as a 77-million-year-old cancer “survivor.”

Doctors are trained to diagnose diseases all the time. So why did it take almost 77 million years to diagnose this one case of cancer?

It all started when Dr. David Evans, on a visit to the Royal Tyrrell Museum in 2017, first noticed some similarities between the bone deformities of a 76 to 77-million-year-old Centrosaurus apertus and human disease.

The deformed dinosaur bone was originally found in 1989 in an excavation with a bunch of other dinosaurs. Because one end of the calf bone looked twisted, scientists assumed it was a fractured injury that didn’t heal well.

Unsatisfied with this diagnosis, Dr. Evans assembled an international team of doctors and scientists from Canada to Japan to help diagnose this unknown deformity.

How one dinosaur received a terrible diagnosis

The researchers first had to rule out the obvious: physical injury. They performed CT scans to look inside the lower leg of the bone. From there, they examined bone cells under the microscope and found similarities with a bone cancer called osteosarcoma.

Osteosarcoma is the most common bone cancer. While it can happen at any age, it mainly targets children and teenagers. Diagnosing osteosarcoma rules out physical injury, but to be sure, the researchers cut thin slices of the deformed bone and compared it to the bone leg of a healthy Centrosaurus along with a 19-year-old human leg with osteosarcoma. It confirmed stark differences between a healthy dinosaur and a cancerous dinosaur.

The comparison also suggests the dinosaur lived with cancer for some time. “A similarly advanced osteosarcoma in a human patient, left untreated, would certainly be fatal,” wrote the study researchers.

Did cancer kill the dinosaurs?

Left untreated or diagnosed too late, osteosarcoma can quickly spread throughout the body and destroy critical organs like the lungs. Reconstruction of the dinosaur leg from CT images suggest the dinosaur had advanced cancer that spread to other body parts. However, because the bone was found in a pile with bones of other dinosaurs it is difficult to make this definitive conclusion.

“The shin bone shows aggressive cancer at an advanced stage. The cancer would have had crippling effects on the individual and made it very vulnerable to the formidable tyrannosaur predators of the time,” said Dr. Evans. “The fact that this plant-eating dinosaur lived in a large, protective herd may have allowed it to survive longer than it normally would have with such a devastating disease.”

Lucky for the dinosaur, it didn’t die from cancer. Unluckily, it still died a horrific death. Based on the cluster of bones also found in the bone bed, the researchers suggest the dinosaur and the rest of its herd most likely died from flooding.

Why should we care about cancer in a dinosaur?

It’s 2020 and there’s still no cure for cancer. According to the National Cancer Institute, there will be 1.8 million people diagnosed with cancer in the United States this year. It’s also estimated that 606,520 people will die of cancer in 2020.

While it’s too late to save the dinosaur, the study gives hope that it may not be too late to save a patient with cancer. This study tells us that cancer has been around for a while. It hasn’t been eradicated by evolution, in fact its presence from 77 million years ago seems to indicate that it has been able to adapt to changing climates and survive. Studying the evolution of diseases like cancer may help to refine treatments by understanding why certain cancers live on today.

The study was published in The Lancet Oncology.

Jocelyn Solis-Moreira is a science journalist and writer who currently works in academic publishing. She holds a master’s degree in neuroscience and enjoys reporting on the latest research discoveries and writing about them in a digestible and enjoyable format. Connect with her via Twitter @JoSolisM.