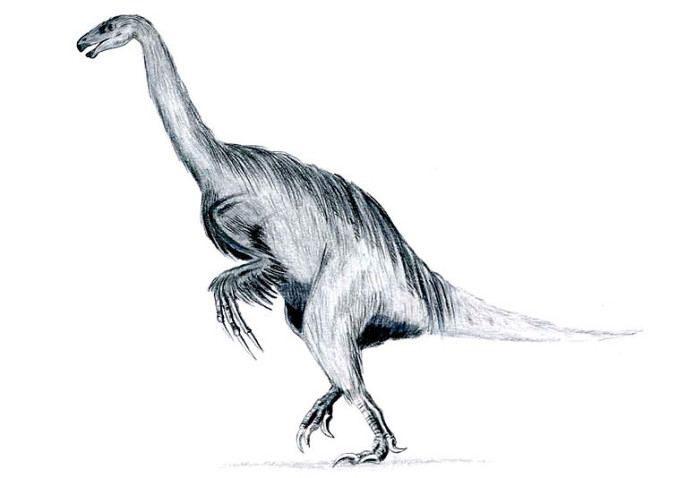 Fossils are usually crushed or incomplete when they are found. Millions of years can take a toll, after all. Consequently, fossils have to be studied very carefully to avoid damage and sometimes they are hard to access. Now, an international team of scientists has found a better way to examine delicate fossils and reconstruct their original forms.

The team has been using high-resolution X-ray computed tomography (CT scanning) and digital visualization techniques to restore a rare dinosaur fossil. They went to work on the skull of Erlikosaurus andrewsi, a 3-4meter (10-13 foot) large herbivorous dinosaur called a therizinosaur, which lived more than 90 million years ago during the Cretaceous Period in what is now Mongolia.

“Therizinosaurs, with their pot bellies and comically enlarged claws, are arguably the most bizarre theropod dinosaurs. We know a lot about their oddball skeletons from the neck down, but this is the first time we’ve been able to digitally dissect an entire skull,” says Dr. Lindsay Zanno.

In the past, scientists had to travel all over the world just to view original specimens of rare and delicate dinosaur fossils, limiting the speed and reliability of research. Using digital models in paleontology is a game-changer. Now, rare fossils can be examined quickly by many people because everyone can have a digital copy to examine.

“Digital models allow the study of the external and internal features of a fossil. Furthermore, they can be shared quickly amongst researchers – without any risk to the actual fossil and without having to travel hundreds or even thousands of miles to see the original,”explains Dr. Lawrence Witmer.

Using a digital model of the fossil, the team virtually disassembled the skull of Erlikosaurus into its individual elements. Then they digitally filled in any breaks and cracks in the bones, duplicated missing elements and removed deformation by applying retro-deformation techniques, digitally reversing the process of the skull being crushed and deformed over millions of years. In a final step, the reconstructed elements were re-assembled to reveal the complete skull of a long-dead Erlikosaurus.

The remains of Erlikosaurus were originally discovered in 1972 at Bayshin Tsav, during a Soviet-Mongolian expedition in Ömnögovi Province. The type species, Erlikosaurus andrewsi, was named and described by Altangerel Perle in 1980. The dinosaur’s generic name is borrowed from the demon king Erlik from Turko-Mongolian mythology.

“With modern computer technology, such as CT scanning and digital visualization, we now have powerful tools at our disposal, with which we can get a step closer to restoring fossil animals to their life-like condition,” says Dr. Stephan Lautenschlager of Bristol’s School of Earth Sciences.

The findings were published in a recent issue of the Journal of Vertebrate Paleontology.

The project was funded by a research fellowship from the German Volkswagen Foundation and grants from the National Science Foundation.