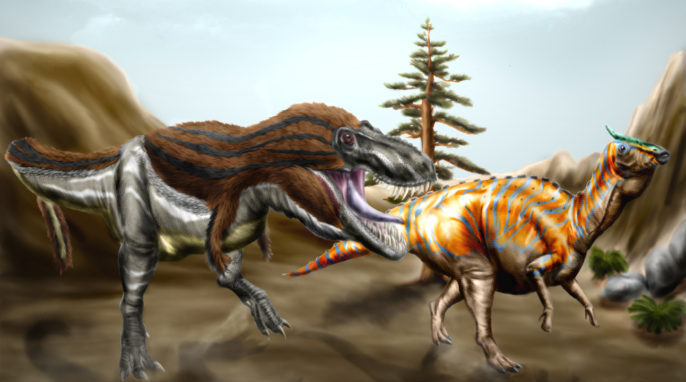 What dinosaur was the ancestor of the mighty Tyrannosaurus rex? Which dinosaur gave rise to this famous lineage?

Tyrannosaurus rex surely is one of the most well-known dinosaurs of all time. We know nearly everything about it, from its anatomy to its behavior. However, one important question hasn’t yet been answered—who was T. rex’s ancestor? What dinosaur species has the honor to be called “the King’s” grandparent?

Tarbosaurus is probably the closest relative of Tyrannosaurus discovered so far. The only notable morphological differences between it and Tyrannosaurus are that Tarbosaurus has proportionally smaller front limbs (yes, there are dinosaur species with even smaller arms than T. rex), a proportionally longer and narrower skull (resulting in eye sockets that are further back in the skull, giving Tarbosaurus a considerably smaller field of binocular vision), and a less massive body. The fact that these two animals are so similar has led some paleontologists to conclude that Tarbosaurus may just be a junior synonym of Tyrannosaurus, although not many agree with this hypothesis today.

There were two types of tyrannosaurids in North America—the northern type (including Albertosaurus, Gorgosaurus, and Daspletosaurus) and the southern type (including Teratophoneus and Lythronax). Tyrannosaurids on the northern part of the continent possessed a ridge on their fourth metatarsal bones (bones that together with tarsi make up the upper foot), while those on the southern part did not. This indicates that these two groups separated at one point in time and started developing different characteristics.

Daspletosaurus torosus is most widely accepted as the direct ancestor to Tyrannosaurus rex. The only notable differences between the two are that Daspletosaurus possesses proportionally larger teeth, longer arms, and smaller feet, and is overall more muscular and heavily built than Tyrannosaurus. Its fossils can be found in Alberta and Montana and come from a period between 77 and 74 million years BCE.

Putting the pieces together

During the 1990s, a small bone called the lacrimal (a bone separating antorbital fenestra from the eye socket) was found in the Judith River formation in Montana, but it was quickly forgotten. It was found in the circa 75-million-year-old sediments from the late Cretaceous period. Only later, in 2006, would paleontologists Urban and Lamanna finally describe the lacrimal and provisionally identify it as belonging to Tyrannosaurus—making it the earliest Tyrannosaurus specimen known to date, if it can be confirmed to belong to Tyrannosaurus. Although Urban and Lamanna do show compelling evidence, the specimen is fragmentary, as it consists of a single bone.

Let’s just note the parallels between Horner’s Daspletosaurus specimens from the Two Medicine formation and this Tyrannosaurus specimen: both were found in Montana, both are from about the same time period, and both are described as potential ancestors of Tyrannosaurus.

I think we have the winner here. It seems to me that Daspletosaurus is most likely to be the ancestor to Tyrannosaurus rex, and some paleontologists agree.

Michael, A.; Lamanna, Matther C. (2006). “Evidence of a giant tyrannosaurid (Dinosauria: Theropoda) from the upper Cretaceous (?Campanian) of Montana,” Annals of Carnegie Museum.

—David is a young, amateur paleontologist and student of vertebrate paleontology who lives in Serbia. He enjoys learning about the behavior, morphology, phylogeny, and evolution of dinosaurs, particularly Theropods such as Maniraptorans and Carnosaurs.