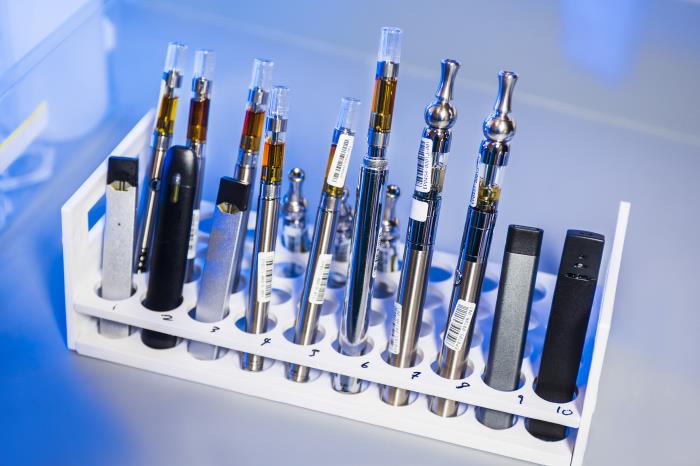 While some thought lung damage from vaping was caused by THC, nicotine, or vitamin E oil, the real culprit might be the heating element.

When e-cigarette users began reporting shortness of breath, chest pain, fever, and other symptoms of vaping-related lung injury, some thought liquid additives were to blame.

Now, new research from the University of California, Irvine School of Medicine and the Huntington Medical Research Institutes suggests lung injury in those who vape is actually caused by the heating element used in some e-cigarettes.

Not the usual suspects

E-cigarette or vaping product use-associated lung injury, also known as EVALI, gained widespread attention in summer 2019 and peaked September 2019. Most prevalent among young men, symptoms include coughing, fatigue, fever, shortness of breath, and other signs of respiratory distress. As of March 2020, the US had 2,800 reported cases of EVALI and 68 deaths, the researchers note.

Initially, the Centers for Disease Control and Prevention blamed tetrahydrocannabinol, or THC, since the substance was present in 82 percent of reported cases. They also thought lung injury might be due to vitamin E acetate, which is added to e-cigarette liquid to dilute additives like THC. Nicotine was another possible culprit, present in 57 percent of reported cases.

But in the new study, published in September 2020, the team was able to cause EVALI symptoms in a controlled lab setting without any additives like THC, vitamin E, or nicotine—and the results came as a twist.

Led by senior author Robert Kloner, the chief science officer for HMRI, the researchers set out to observe how different vaping- or smoking-related environments affected rats’ cardiovascular systems. The rats were exposed to regular air, tobacco smoke, e-cigarette vapor with nicotine, and e-cigarette vapor without nicotine.

Before September 2019, the research team used an e-cigarette with a stainless-steel atomizer heating element. During this time, none of the rats developed signs of EVALI. But when the stainless-steel model was pulled from the market, the researchers swapped to a different device that still worked with their setup: a new e-cigarette with a nickel-chromium alloy heating element.

When the switch was made, 14 of the 18 rats exposed to two hours of e-cigarette vapor on a 70-watt power setting began showing signs of distress: audible wheezing, lack of activity, and heavy breathing through the mouth, which is unusual since rats typically breathe through their noses. One rat worsened to the point it had to be euthanized.

According to one of the researchers, Michael Kleinman, these symptoms began occurring within an hour of starting an experiment with the new e-cigarette. Kleinman also says lung tissue analysis revealed more evidence of the symptoms’ severity, including lesions, concentrations of red blood cells, and pneumonitis. Meanwhile, none of the rats exposed to untreated air showed signs of illness, nor did the rats exposed to e-cigarette vapor heated by stainless steel.

“The results were so impactful, we felt it imperative to release the initial findings early so that electronic cigarette users could be cautioned sooner, especially considering e-cigarette users are at increased risk of COVID-19,” Kloner says.

A closer eye on e-cigarettes

While these results were compelling enough for the research team to release its findings early in the hopes of warning e-cigarette users, further studies are needed to dig deeper.

Researchers are not yet sure what mechanism within the heating element causes such respiratory destruction, but they suspect higher wattages on e-cigarettes’ power settings may have an effect. They say the vapor’s chemical makeup and particle size could play a role too, as well as the “vaporization of propylene glycol/vegetable glycerin at a higher temperature,” but these aspects were not studied.

The study also did not examine flavorless e-cigarette vapor, but suggests it is unlikely that flavoring causes lung injury, since the same flavoring was used in both the stainless-steel and nickel-chromium trials.

E-cigarette “users should be cautioned about the potential danger of operating units at higher than recommended settings and be aware that adverse effects can occur without THC, vitamin E, or nicotine,” the study states.

This study was published in the Journal of the American Heart Association.

Featured image: A test tube rack that had been stocked with examples of various electronic cigarettes, referred to as e-cigarettes, or e-cigs, and vaping pens. These items would undergo testing inside a Centers for Disease Control and Prevention (CDC) laboratory environment. Courtesy of CDC/ Von Roebuck

Mackenzie Myers @kenzwrites is a science writer, native Michigander, and former field station ragamuffin. She holds an MFA in nonfiction writing but would be a soil scientist if she could do it all over again.