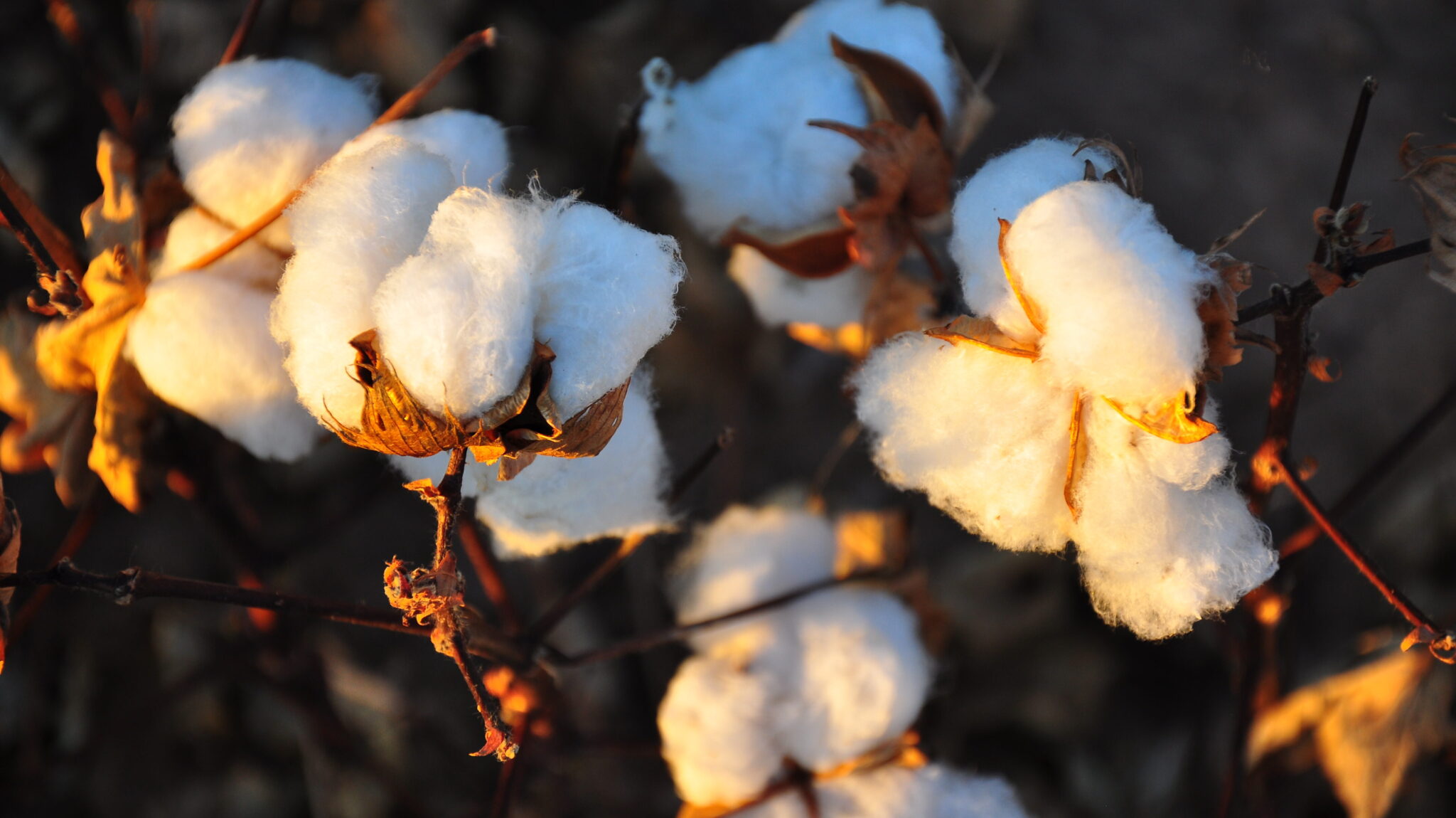 As you are reading this, chances are that you are wearing something made of cotton, or have come in contact with some cotton fabric today. Cotton accounts for nearly half of all clothing material in the world. Cotton plants date back to prehistoric times; there is evidence of cotton farming from around 5000 BC in the Indian subcontinent. Cotton fabric is made of cotton fibres, which grow in the protective cases (bolls) around the seeds of the cotton plant (Gossypium hirsutum). However, it is not just the fibre that is useful—the entire cotton plant is used after harvest. The seeds are used either as animal feed or to make cottonseed oil, and the stalks are tilled into the soil as fertiliser. It is therefore an incredibly useful plant that accounts for nearly 2.5 percent of land used for arable farming today and is a heavily traded agricultural commodity.

Yet this vulnerable plant has to overcome harsh constraints in order to survive. There is now a concerted effort by plant scientists to better understand what makes a cotton plant more susceptible to environmental challenges.

Cotton farming faces various constraints that are determined by the environment and other living organisms. Drought (deprivation of water for long periods of time) is a major limiting factor for growing cotton, given that it takes nearly 20,000 litres of water to produce one kilogram of cotton—that is equivalent to a single T-shirt. As the climate around the world changes and there are increased occurrences of drought, cultivation of cotton is becoming a bigger challenge. In addition, pests are a constant threat that cotton farmers try to eliminate through the use of pesticides, which can be harmful to the soil (and sometimes toxic to the farmers, too). In order to enable better plant breeding to grow drought-tolerant crops, we need to first understand how drought affects plant physiology.

Plant responses to drought are complex, with a multitude of biochemical and physiological responses to the lack of water. Overall, the plants try to conserve water by adapting their root structures, decreasing leaf size, reducing photosynthesis, and closing the stomata (pores on leaf surfaces that control water and gas exchange between the plant and the environment). Biochemically, once plants sense drought stress there is an increase in the production of the hormone abscisic acid (ABA) that leads to stomatal closure, as well as changes in the expression of genes and proteins that regulate drought tolerance. However, ABA is only one of many hormones that interact with one another to regulate stress responses. Although there are numerous studies examining ABA and drought stress responses, there is not much known about the steroid hormone brassinosteroid (BR).

Brassinosteroids (BRs) are a group of naturally occurring plant hormones that are essential for the regulation of cell division, elongation, various developmental processes, reproduction, and responses to abiotic and biotic stresses. It is known that application of synthetic BRs regulates plants’ responses to drought, cold, salt, and even pathogen stress. However, the mechanisms by which endogenous plant BRs might regulate these responses has been unclear until now. In a recent study, Eryong Chen and colleagues found that the levels of endogenous BRs in cotton plants regulate drought tolerance.

The regulation of endogenous BR concentrations within a plant are determined by its biosynthesis and degradation. PAG1 is a gene in cotton that makes an enzyme called cytochrome P450 monooxygenase. In mammals, this enzyme oxidises compounds such as steroids, thereby controlling their synthesis and degradation. There is an enzyme with a similar function in the model plant Arabidopsis (whose genome has been sequenced) that acts as a catalyst to inhibit endogenous BRs, thereby controlling how much BR is present in plants. The function of PAG1 as a regulator of BR levels in cotton was not known until Chen’s team studied a cotton plant deficient in this gene. The researchers aimed to understand the function of endogenous BRs in regulating drought tolerance in cotton, and to test this, they used pag1, a plant that has a mutant form of PAG1. This was the first study examining BRs, cotton, and drought tolerance.

The study found that the pag1 cotton mutant plant was deficient in BRs, compared with control (“wild-type”) plants that had an intact PAG1. In addition, the mutant was more sensitive to drought stress, when watering was withheld. On further examination, the researchers found that the leaves of the pag1 mutant had more stomata with larger apertures, which led to more water loss from the plant. In addition, the levels of ABA were lower in the pag1 mutant compared with wild-type plants, following drought stress. Roots grow towards water; therefore, deeper roots enable better water acquisition from the soil. The roots of the pag1 mutant were shorter than those of the wild type, suggesting that this would contribute to reduced water uptake. Further experiments showed that transport of the hormone auxin, which controls root growth, was affected in pag1 mutants.

This led the scientists to conclude that PAG1 (in the wild-type plant) inhibits the concentration of endogenous BRs to increase the concentrations of ABA, thereby controlling stomatal apertures and water loss. In addition, PAG1 also controls auxin transport to affect root development. These events ultimately lead to drought tolerance.

Regulation of stress responses in plants via hormones occurs via changes in gene expression and protein composition. To understand the molecular processes by which PAG1 controls the effects of BR, the researchers also undertook studies to examine the entire protein content of the mutant plant. They found several marker proteins related to drought stress tolerance that were significantly lower in abundance in the pag1 mutant, compared with the wild-type plant. This meant that the lack of BR in the mutant led to less accumulation of stress-related marker proteins that would normally protect the plant from drought stress. Finally, they went one step further and analysed field-grown cotton plants. The pag1 mutant had distinctly low boll numbers, fruiting branches, and seed cotton, which decreased even further following drought.

Using several approaches, Chen and colleagues have therefore identified that drought tolerance in cotton is controlled by the hormone BR. Identification of specific genes such as PAG1 and its target marker proteins can result in their being used as molecular markers for breeding programmes, to enhance drought-tolerance traits. This would mean that cotton plants that have these markers that correlate with drought tolerance could be selected for without yield penalty in the field.

Given the prevalence of water shortage in parts of the world where cotton is being cultivated, solutions such as that provided by this study could pave the way forward for successful breeding of drought-tolerant cotton plants.

This study was published in the journal BMC Plant Biology.

—Radhika Desikan is a plant scientist by training who has taught plant science for several years and has researched and published on the behaviour of plants facing various abiotic and biotic stresses. Radhika recently became interested in plant science outreach to schools and communicating plant science to a younger audience.