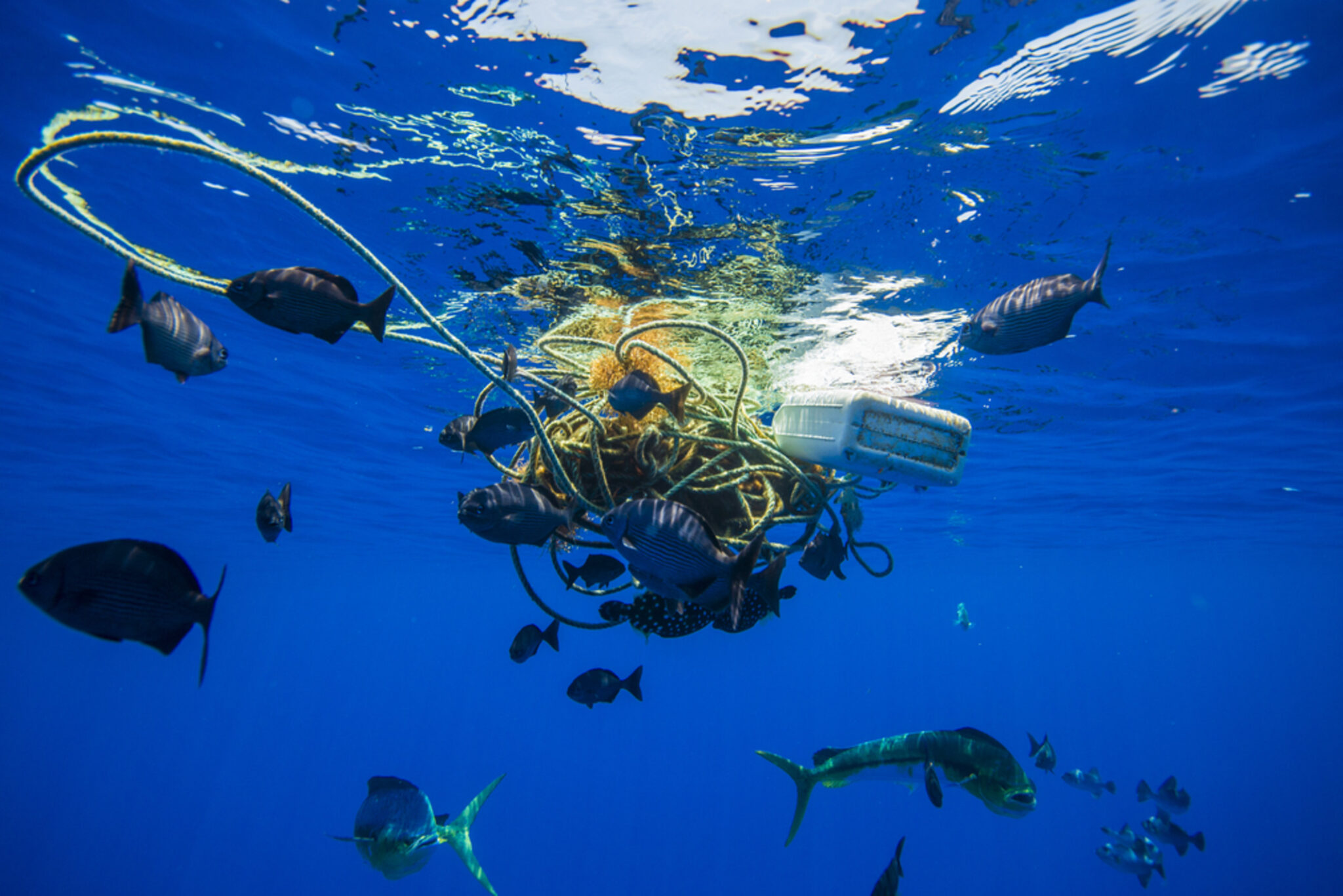 Marine plastic pollution must be addressed by the United States through policies on single-use plastics and abandoned fishing nets.

Plastics may be convenient and cheap, but they are littering every part of the Earth, even once-pristine areas. The sheer scale of marine plastic pollution is staggering: over 5.25 trillion pieces of plastic are estimated to engulf the oceans. And the amount of plastic entering the oceans is expected to increase by an order of magnitude by 2025. In the “Great Pacific Garbage Patch” located between California and Hawaii, almost half of the waste by size comes from fishing nets.

Marine plastic waste is not just a nuisance. Effects on marine biodiversity are becoming increasingly—and shockingly—evident from entanglement to ingestion, the latter of which can affect humans through bioaccumulation in food webs. Less obvious, though, are the effects on marine life of the release of toxic pollutants from ingested plastic.

What’s clear is that in order to turn the tide of the marine plastic pollution crisis, the United States needs to urgently devise effective policies. Autumn Iverson, a conservation ecologist and PhD candidate at the University of California, Davis, contends in a perspective paper that strong federal actions in the form of policy reforms to ban all single-use plastics and replace plastic fishing gill nets with biodegradable ones are needed. This paper, published in Conservation Science and Practice, is the first to address US policy on this issue.

Sea turtles get fooled by trash resembling their favorite food.

While the United States has an effective waste management system compared with that of other countries, particularly Asian countries, it is still in the top 20 among 192 coastal countries in terms of mismanaged waste and litter, Iverson points out. She says that mismanaged waste generally refers to waste that is not taken for disposal or recycling and becomes litter, noting that this could be “either intentionally as when someone throws something out of a car window, or unintentionally as when something falls off a truck or blows away unnoticed.” About 2 percent of mismanaged waste produced in the United States each year becomes marine debris. Although this may not seem high, the United States generates the highest per capita plastic waste out of the top 20 countries, at a whopping 2.58 kg per person per day.

Iverson states that US companies have been responsible for spreading single-use plastics to other countries, where the companies have taken actions to reduce such plastics. Coca-Cola, for example, recently revealed its packaging footprint, which amounts to about 108 billion plastic bottles per year. Last year, the beverage giant announced that it would increase the recycled content of its single-use plastic bottles to 50 percent by 2030. But the company remains averse to adopting bottle deposit schemes except in some regions such as the United Kingdom, where environmental groups pressured the company to provide them.

Historically, the United States has relied on exporting its plastic waste. Of the plastic waste exported between 1988 and 2016, around 56 percent—much of which comprised single-use plastic food packaging—was sent to China for recycling. But with China’s 2017 ban on the import of plastic waste, which has left the recycling industry scrambling to deal with the enormous amounts of waste, the United States must now dive deep to tackle the underlying problem: reducing its plastic footprint.

Iverson presses for a full federal ban on all single-use plastics such as plastic bags, utensils, and straws. Unlike some Asian and African countries that have banned plastic bags, for instance, the United States lacks a federal policy. Small municipalities such as New York City and Washington DC, she notes, have placed levies on plastic bags, while the state of California has banned them with some success.

A careful definition of single-use plastics will need to be formulated to determine what kind of plastics come under its scope, Iverson stresses, stating that “some single-use plastics are treated as ‘reusable’ simply because they are made from slightly sturdier material (such as thicker plastic bags), and these should not be an acceptable alternative as they still present the same risks to the marine environment as single-use products.” She also warns that some bioplastics, which are made from renewable resources such as biomass rather than petroleum, are claimed to be biodegradable but without proper composting have the same lifespan as traditional plastic.

Another major cause of marine pollution is derelict fishing gear, mostly gill nets and crab pots or traps. Gill nets are long walls of net that float on the surface, are allowed to drift, or are anchored; they can extend up to 2 miles in length. Iverson says that they are banned by the United Nations in international waters, mainly to prevent “incidental catch” (unintended capture of other species) and “ghost fishing” (entrapment of marine life long after nets are abandoned) but that they are not federally banned in the United States.

Synthetic gill nets should be replaced with ones made with natural and biodegradable materials, Iverson suggests. In the past, biodegradable materials such as wood and cotton were used, but “around the 1970s, materials for the nets changed to plastic monofilament and vinyl-coated steel.” Fishing nets that degrade more quickly, according to Iverson, “would reduce the time that lost nets are able to ghost fish.” Shifting to alternative fishing strategies that reduce the possibility of losing plastic gear would help. One easy solution is to label the gear with the owner’s information. “This could cause a feeling of accountability” among fishers, Iverson says. In addition, she proposes equipping fishing gear with GPS devices (such as on the buoys attached to the gear) to pinpoint and retrieve lost gear.

Another strategy that Iverson proposes is to add labels to fisheries that do not contribute to marine pollution. This would not only enable consumers to make more informed choices when buying seafood by tapping into their desire for sustainable practices by fisheries, but also encourage greater participation by fisheries. Ultimately, she emphasizes that policy makers and fishers would need to work together to “come up with the most effective and reasonable solutions that work for everyone.”

Meanwhile, however, massive cleanups of marine debris in the ocean should continue, such as those conducted by the NOAA Marine Debris Program, which removed more than 1,600 metric tons of marine debris in 2017. Iverson suggests that the public can help by participating in beach cleanups, citing California’s Coastal Cleanup Day in 2016, where 59,000 volunteers scooped up 320 metric tons of trash.

Treading the path of Europe

The United States should learn from other countries that have implemented policies to cut plastic pollution to formulate an effective approach, says Iverson. “The European Plastics Strategy is an ambitious and admirable strategy that I think the US should mirror when considering the issue of marine plastic pollution. Obviously the approach the US takes may be slightly different, but I think the US can learn a lot from the steps Europe has already made in this direction.”

The European Plastics Strategy is a comprehensive proposal that was approved by the European Parliament in December 2018. It embraces bans on single-use plastics such as cotton swabs, utensils, straws, and stirrers; for bottles it has set targets for reducing consumption as well as providing deposit schemes. Importantly, it also includes “extended producer responsibility,” where producers of single-use plastic products would bear the costs for managing waste, cleanup of litter, and raising public awareness.

Effective policy reforms in the United States could have far-reaching effects in combating the ever-growing threat of single-use plastics for both marine life and for us.

This perspective paper was published in the journal Conservation Science and Practice.