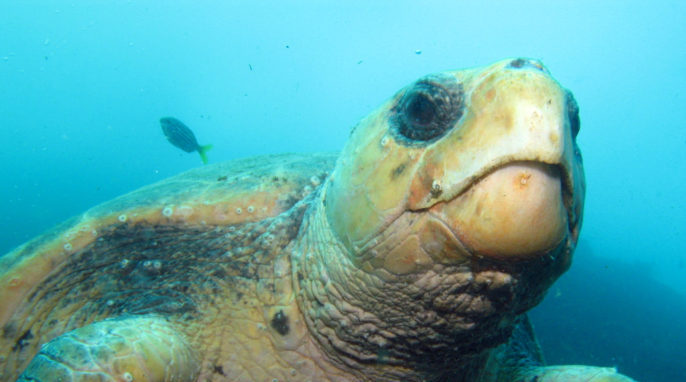 With an estimated 5 trillion pieces of plastic debris floating in the world’s oceans, marine animals are increasingly suffering from the effects of human-generated trash. Many species of marine animals are affected by pollution, but those that mistake trash for food, such as green and loggerhead sea turtles, are often the hardest hit. Sea turtles have been around for millions of years, but are now coming up against unprecedented human threats. Their ability to tell trash from food could be the key to their survival.

As the amount of artificial debris in the oceans increases, scientists are seeking to understand what makes certain species more likely to mistake trash for food. A new study from a team of international researchers at the University of Tokyo shows that not only are omnivorous green sea turtles more likely than larger, carnivorous loggerhead turtles to ingest trash, but also that their unique feeding habits may reveal why.

Swallowing floating pieces of plastic can lead to gut obstruction, decreased ability to eat, absorption of toxins, and even more dire consequences for these endangered animals.

“Ingestion of artificial marine debris by sea turtles is considered as a significant threat to their health and can lead to death. However, it should be noted that ingestion of marine debris does not necessarily have immediate lethal effect, as it appears that sea turtles frequently ingested natural debris such as bird feathers, stones and leaves, and a lot of natural and artificial debris are able to pass and excrete them,” says lead researcher Katsufumi Sato.

Previous studies of trash ingestion in turtles have shown a significant difference in the amount of debris eaten by sea turtles, particularly green and loggerhead turtles. However, the University of Tokyo researchers wanted to know what was causing this difference. Personally observing the feeding behaviors of the turtles would have been nearly impossible, so they did the next best thing. They attached small video cameras to the turtles’ shells and recorded their behavior in the food-rich waters off the Sanriku Coast of Japan.

Cameras recorded over 100 hours of video footage of the behavior of ten loggerhead and six green turtles. The cameras showed the turtles’ encounters not only with their natural food sources but also with artificial debris floating in the water.

Video data showed that green turtles ingested artificial debris 21 out of the 32 times they encountered it, while loggerheads ingested it 2 out of the 12 times they encountered it. Gut and feces samples taken from turtles supported the data, showing artificial debris in 84 percent of loggerheads’ stomachs and in 100 percent of green turtles’ stomachs. The most common type of debris that the researchers found was soft plastic.

The videos also revealed clues about why green turtles ingested more plastic than loggerheads did. Loggerheads were observed eating more gelatinous foods, such as jellyfish, while green turtles foraged on both jellyfish and marine algae. Most of the trash that the turtles found was drifting near the surface of the water, where green turtles are more likely to feed. Loggerheads tend to eat more animals that live on the ocean floor, such as sea urchins and gastropods.

The difference in ingestion rates may also be caused by the shape and movement of the foods that the two species prefer to eat. Green sea turtles are more likely than loggerheads to eat things that passively drift or sway in the currents and look similar to transparent plastic.

The research team hopes to use their video data collection methods to learn more about how other species are affected by trash consumption and how to effectively fight the growing problem of plastic pollution in the oceans.

Emily Rhode is freelance writer and blogger whose training and passions lie at the intersection of science and education. She has worked as an outdoor environmental educator, a science teacher, and a professional communicator and trainer. You can follow her on Twitter @riseandsci.