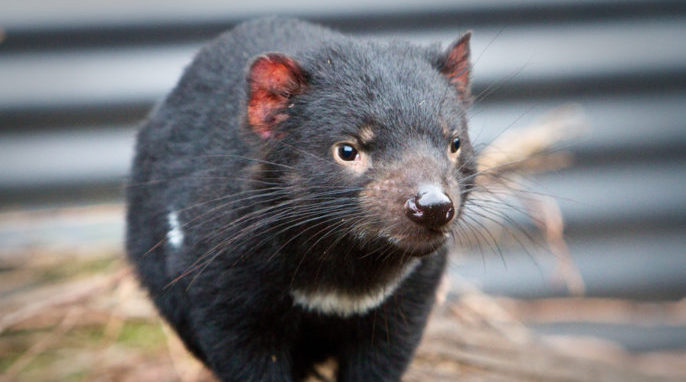 Tasmanian devils are the largest remaining marsupial carnivore. They are highly social and extremely aggressive, and they’re suffering from facial tumors.

The Tasmanian devil is a natural-born fighter, but a transmissible facial cancer has devastated Tasmanian devil (Sarcophilus harrisii) populations in the past 20 years. Overall, the species has lost more than 80 percent of its individuals, and in some areas, more than 90 percent of the population has been wiped out by the cancer, bringing these feisty animals to the brink of extinction. Despite this, devil populations persist in disease-stricken areas, thanks to the development of an immune response to the disease. This development was found by researchers led by Andrew Storfer, associate director of the graduate program at the School of Biological Science at Washington State University.

Who are the Tasmanian devils?

Tasmanian devils are the largest remaining marsupial carnivore; they hunt during the night. They are highly social and extremely aggressive toward one another. In 1841, French naturalist Pierre Boitard named them Sarcophilus harrisii, or “Harris’s meat-lover,” after English naturalist George Harris, who first published a description of the Tasmanian devil in 1807. However, they owe their popular name to the first European explorers of Tasmania, who associated Sarcophilus harrisii’s far-reaching night vocalizations with hellish sounds. The devils live throughout Tasmania, except on its highest peaks. They prefer open forests and woodlands and avoid tall or dense, wet forests. They particularly concentrate in mixed patches of grazing land and forest or woodland. The Tasmanian devil’s large head and neck allow it to generate among the strongest bites per unit of body mass of any extant predatory land mammal.

Their bite, their torture and delight

Storfer explains that Tasmanian devil facial tumor disease (DFTD) is a clonally transmissible cancer, which means that live cancer cells are the infectious agent, and that they are transmitted to new hosts when individuals bite each other. Tasmanian devils frequently bite each other on the face during social interactions. The cancer is nearly 100 percent fatal—because it grows on the face to the point that animals starve or can’t breathe—and threatens the species with extinction. However, over the 18 years since DFTD was first observed, distinct genetic and karyotypic sublineages have evolved.

Storfer and his team have found evidence of an evolutionary resistance to the tumors. They identified two portions of the devils’ DNA that contain genes related to immune function. Using a next-generation DNA sequencer, the researchers cut the genome into many small pieces and identified their differences in single DNA base pairs, which are known as single-nucleotide polymorphisms, or SNPS. The SNPS (or “snips”) are single-letter differences in DNA sequences, ensuring that each individual is unique. Then, researchers scanned the genomes of 294 devils, thus producing 90,000 DNA portions, covering approximately 20 percent of the Tasmanian devil genome, spread roughly evenly across the six autosomes (non-sex chromosomes). They looked at three populations of devils, assessing their genetic composition before the cancer arrived and after a few generations of cancer presence, choosing only SNPS that changed in all three localities studied. The team found evidence of evolution in two small portions of the genome containing seven genes. Within these portions, particular variants significantly increased in frequency four to six generations after the disease’s arrival. Remarkably, this evolution was quite rapid—and five of the seven genes were associated with immune response and cancer in other mammals, including humans.

How these gene sequences developed

These genes were already part of the Tasmanian devils’ immune systems. However, the genes increased in frequency due to natural selection. That is, the individuals with particular forms of these genes (alleles) survived and reproduced disproportionately to those that lacked the specific variants when disease was present.

In danger of extinction

Emerging infectious diseases are increasingly implicated in population declines and even species’ extinctions. In 2004, the International Union for Conservation of Nature Red List (IUCN Red List) stated that among 833 listed extinctions (animals and plants), only 31 were attributed even in part to infectious disease. Two years later, the number of mammal species with an infectious disease listed as a threatening process had increased to 54.

Researchers consider DFTD one of the most fascinating recently emerging infectious diseases. In fact, only two other such cancers are known outside the laboratory: the canine transmissible venereal tumor (CTVT), which dates back at least 11,000 years and is generally not fatal to domesticated dogs, and a recently discovered cancer affecting marine bivalves along the east coast of North America, in which the extent of losses is not known. In contrast, DFTD has caused large population declines in less than two decades. First detected in northeastern Tasmania in 1996, DFTD has been nearly 100 percent fatal and will soon encompass the entire geographic range of S. harrisii, leaving no uninfected wild populations.

Even though the Tasmanian devil has evolved and the evolutionary response is promising, Storfer cautions: “We are certainly still worried. The disease has infected nearly all known populations of devils and is still causing dramatic declines in newly infected populations. Fortunately, there is an off-island captive breeding program that will be used to reintroduce devils in the case of extinction.” Researchers Kathy Belov at University of Sydney and Greg Woods at the Menzies Institute in Tasmania are experimenting with boosting the immune system of individual devils and releasing them into the wild, but it is too early to tell whether this is an effective strategy.

Future research, for this and other highly pathogenic emerging infectious diseases, should focus on understanding the evolution of host and pathogen genotypes, their effects on susceptibility and tolerance to infection, and their implications for designing novel genetic management strategies.

This research was published in the journal Nature Communications.

Di Silvestro, Roger. “My, What a Big Bite You Have.” National Wildlife Federation, 2008. http://www.nwf.org/News-and-Magazines/National-Wildlife/Animals/Archives/2009/Least-Weasel-Carnivore-Bites.aspx