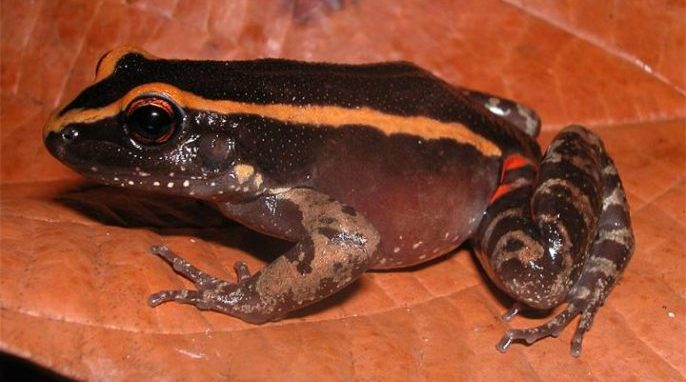 More than a thousand species of frogs live in the warm and humid Amazonian forest. Some of these species have to contend with ant attacks. But scientists have found a frog in the Amazon rainforest that doesn’t have to worry about these attacks, thanks to chemicals produced in its skin that mimic those released by leaf-cutting ants.

The frog Lithodytes lineatus buries itself under leaf litter and logs in the Amazon where it lives happily among leaf-cutting ants. These ants are known for farming their own fungus in “fungal gardens,” which they use to feed their larvae. They use chemical odors known as pheromones to recognize each other in the colony. Each colony has large worker ants that act as soldiers—if they sense a threat or intruder, they will launch an attack and bite.

These findings confirm that the skin of L. lineatus contains chemicals that resist attack by Atta leaf-cutting ants. “It therefore seems that Lithodytes lineatus has chemical skin compounds that are recognized by ants of genus Atta, which may allow for coexistence between ants and frogs,” says André Barros, lead researcher of the study.

Chemical mimicry is common among invertebrate parasites to enable them to live in social insect colonies but is rare among vertebrates such as frogs. In this case, L. lineatus frogs trick the ants into thinking that the frogs are members of their own colony, and this enables them to coexist with the ants. Blending in among ant colonies may be beneficial to the frogs, as the researchers think that anthills provide a stable and humid environment for the development of the frogs’ eggs.

Although unusual, this strategy is not unique. It is also used by the West African savanna frog Phrynomantis microps that also lives unharmed inside the nests of ponerine ants. These ants, when disturbed, sting aggressively. But like Atta ants, they are fooled by chemicals released by the skin of these frogs.

—Neha is a freelance science writer based in Hong Kong who has a passion for sharing science with everyone. She writes about biology, conservation, and sustainable living. She has worked in a cancer research lab and facilitated science learning among elementary school children through fun, hands-on experiments. Visit her blog Life Science Exploration to read more of her intriguing posts on unusual creatures and our shared habitat.