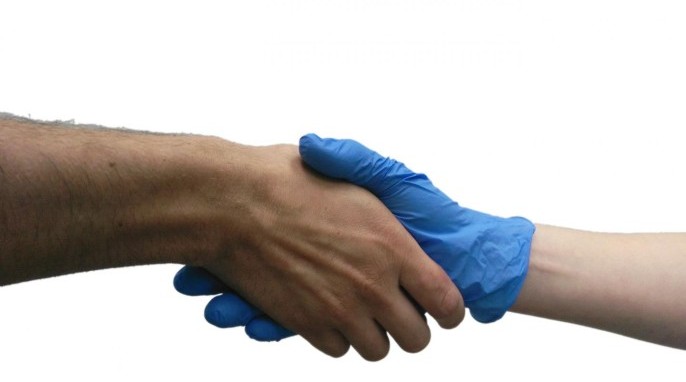 The COVID-19 pandemic has done away with handshakes for many people, at least temporarily. Handshakes predate written history a gesture of goodwill and commitment. Archaeologists have dated an image of two soldiers shaking hands in ancient Greece to the fifth century BC.

But why do people shake hands? A Weizmann Institute study suggests one of the reasons for the ancient custom of handshakes may be to check out each other’s chemistry. Even if we are not consciously aware of this purpose, handshaking may provide people with a socially acceptable way of communicating via the sense of smell.

Handshakes: Nice to Sniff You

Whether we’re aware of it or not, people often sniff their own hands, but they do so more actively and for a much longer time after shaking someone else’s hand, the study has found. “It’s well known that germs can be passed on through skin contact in handshakes, but we’ve shown that potential chemical messages, known as chemosignals, can be passed on in the same manner,” explains Idan Frumin.

People tend to value firm, confident handshakes, making them an important means of nonverbal communication. But the role of scent, or chemosignaling, suggests there is more going on. “Handshakes vary in strength, duration and posture, so they convey social information of various sorts,” says Noam Sobel of the Weizmann Neurobiology Department. “But our findings suggest that at its evolutionary origins, handshaking might have also served to convey odor signals, and such signaling may still be a meaningful, albeit subliminal, component of this custom.”

These research findings are reported in the peer-reviewed journal eLife. Support for this research was provided by the Norman and Helen Asher Center for Brain Imaging, the Nella and Leon Benoziyo Center for Neurosciences, the Carl and Micaela Einhorn-Dominic Institute for Brain Research, the Nadia Jaglom Laboratory for the Research in the Neurobiology of Olfaction, the Minerva Foundation, the European Research Council, and others.

Learn More About Your Brain and Your Sense of Smell

How a Special Smell Triggers a Memory: Does the smell of freshly baked cookies make you think of your grandmother’s house? Neuroscientists call this an associative memory.

A Fly Cruises the Smell Arena  for Science; Apple cider vinegar. Almond jelly dessert. Mentsuyu. These are just some of the smells tested on flies in Hokto Kazama’s lab—you might recognize the last one as the soy sauce-based broth in noodle soup. These smells and more are processed in a part of the fly brain only slightly bigger than half the width of a human hair.

Image courtesy of the Weizmann Institute of Science