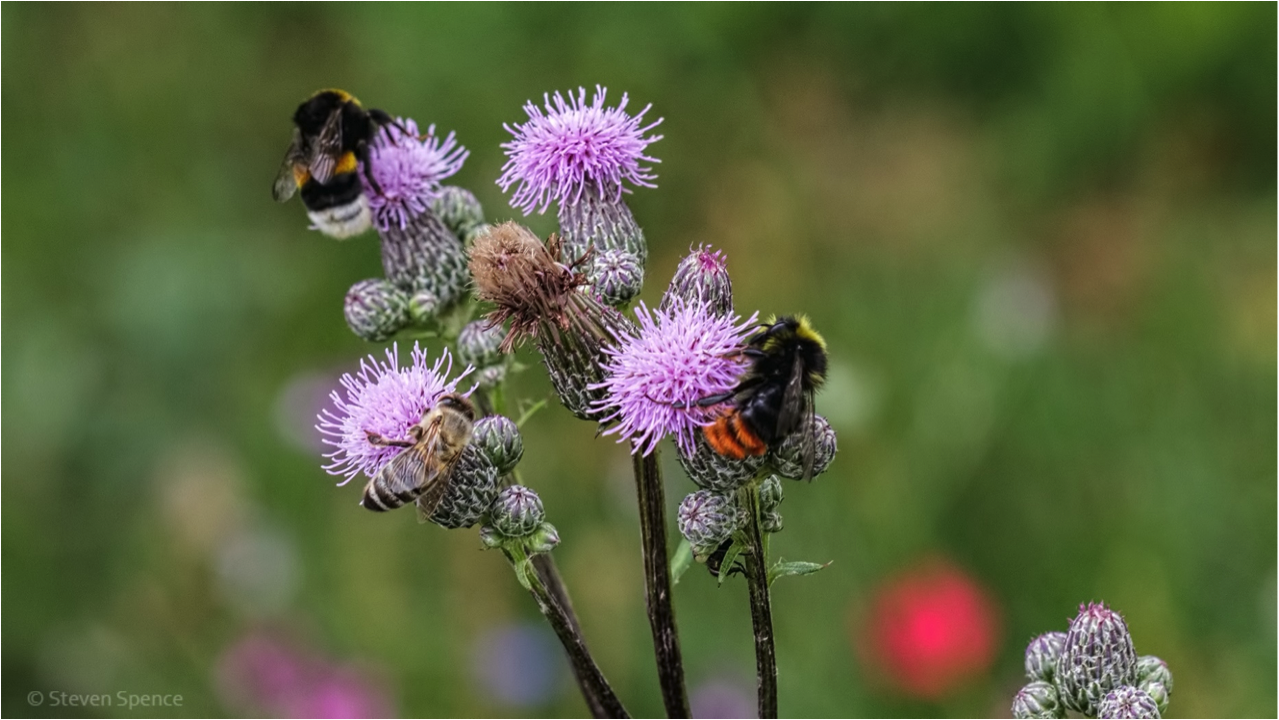 Insect-friendly urban gardens show great promise to be havens for bees and other pollinators, securing their future and allowing them to thrive.

A pollinator-friendly habitat may conjure up images of wide-open meadows bursting with wildflowers, far from the hustle and bustle of cities. But a new study from researchers in Aachen, Germany, has found that effective pollination stations can—and in some cases already do—exist just next door to coffee shops, high-rise office buildings, and city hall.

Crucial to the survival of humans and other plant-eating animals, honeybees and other pollinators are facing a whole host of challenges, including habitat loss, invasive species, and pesticide-related health problems and fatalities. Add in the realities of urban sprawl and increasing human population, and it becomes all the more evident that pollinators need as much help as they can get.

The July 2020 study, led by Benjamin Daniels of RWTH Aachen University, argues that insect-friendly urban areas could play an important role in securing the future of the world’s pollinators, which in turn provide three-quarters of the world’s food supply.

From May to August 2016, Daniels and his team examined a variety of green spaces across Aachen, a city of roughly 246,000. They paid special attention to linden, a type of flowering tree attractive to pollinators, during its blooming period from late June to mid-July. Linden was chosen due to its prevalence in other German cities of similar size, as well as its ability to withstand high temperatures, droughts, traffic emissions, and other environmental conditions often found in urban areas.

In addition to a rural control site just outside of Aachen, the study identified four categories of green spaces within city limits: a park in the city center, a cemetery, recreational parks, and community gardens. Within each of the five sites, the researchers homed in specifically on flower beds and trees pollinated by insects.

To offset the difficulty of tracking each and every interaction between plant and pollinator for four months straight, Daniels and his research team surveyed each site in half-hour intervals from 10 a.m. to 5 p.m., on sunny days with no wind. In total, they recorded more than 7,700 interactions between plants and their pollinators.

Perhaps not surprisingly, the rural site outside Aachen had the most observed pollinator visits. By comparison, of the urban areas studied, recreational parks, the cemetery, and the park in the city center were visited by insects far less frequently.

If there was one consistency across all four park categories, it was flowering linden trees: the averages of these visits ranged from 12.9 to 16.4 per half hour. Higher numbers of bumblebees and honeybees visited the trees as well, compared to other types of pollinators. Linden trees’ high nectar and pollen production during their blooming period made them a good candidate for attracting pollinators, the study says.

Moving forward with the idea of turning urban green spaces into pollinator hotspots, the researchers acknowledged that one study in one city during one growing season is not quite enough to paint an accurate picture, leaving room for year-round studies to further assess pollinator interactions.

But within the right, near-natural conditions, cities in general can be a good fit for pollinators due to factors like a higher density of flowering plants compared to rural areas. According to the study, urban beehives in cities that don’t use pesticides actually have higher honey yields per year compared to hives in agricultural areas. Planting of native flowers, grasses, and trees in urban green spaces, even in small patches that are left to grow on their own with minimal human intervention, can go a long way toward providing places for pollinators to thrive.

Though the sensitive, fine-tuned relationships between plants and pollinators are in many ways under fire, there is a glimmer of hope for bees living in the city.

Featured photo by Steven Spence: Thistles are appreciated by wild bees: here two types of bumblebees and a honeybee.