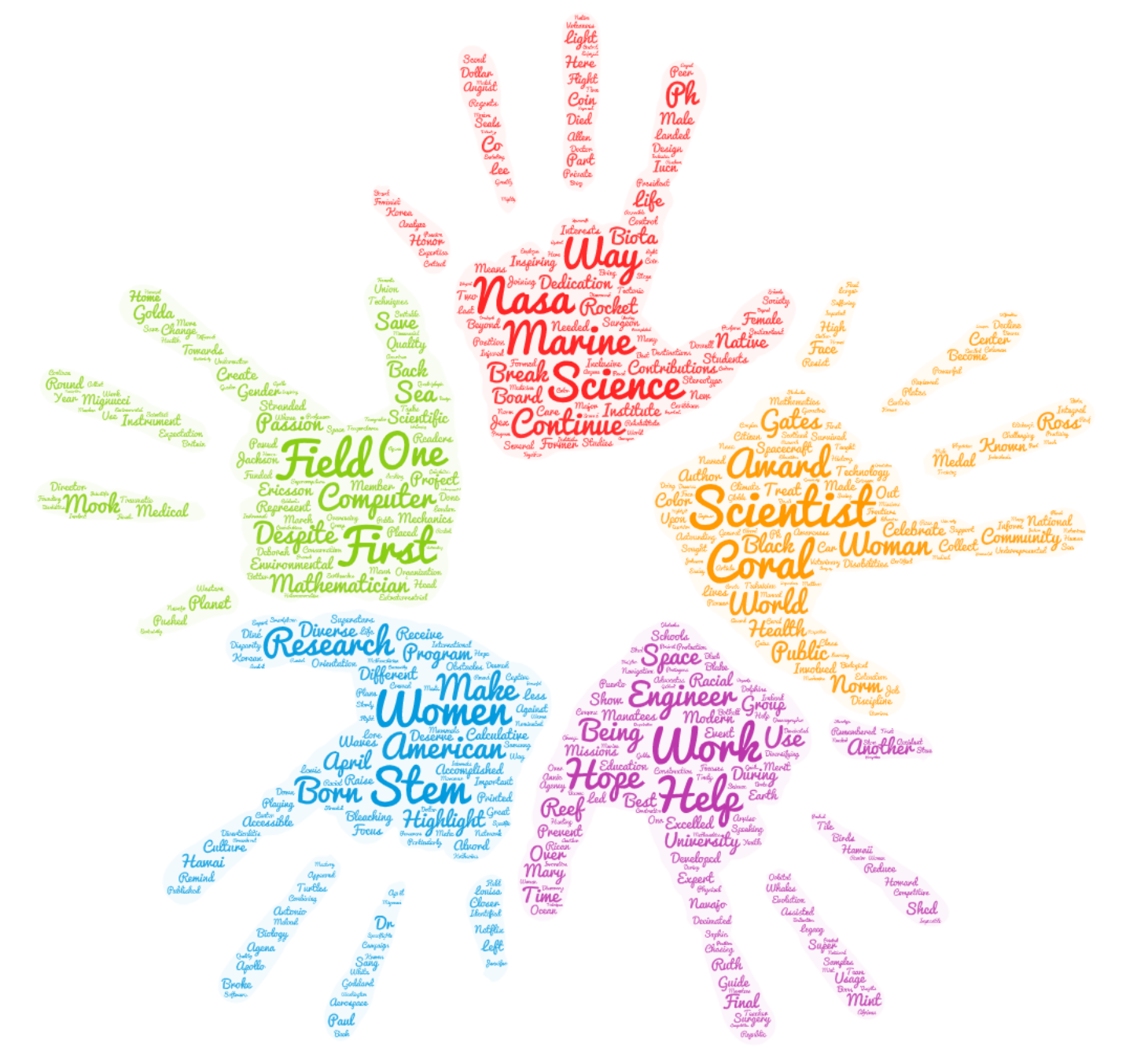 Here at the Biota Project, we are back for another round of inspiring gender, racial, and stereotype breaking scientists who have made a difference in our modern world. From working at NASA as engineers and mathematicians, to making health sciences accessible to their culture, and working to save the planet, these scientists deserve to be celebrated for their astounding dedication to their work. In this final highlight of our scientific superstars, we are celebrating scientists who excelled beyond expectation despite the obstacles in their way. By highlighting these accomplished scientists that are different from the norm, we hope to shed light on the diversity needed in STEM fields and remind our readers that STEM can be inclusive despite being a challenging and competitive field. These scientists represent the diversity that we can continue to work towards in STEM fields to have scientists that represent our diverse communities and our interests.

From Computer Science to Engineering, women continue making waves with their accomplishments. Mary Golda Ross, born on August 9, 1908, was the first Native American female engineer, an accomplishment which landed her as the face of the 2019 Native American dollar coin printed by the U.S. Mint as a way to honor the contributions of Native Americans to the space program. Mary Golda Ross is best remembered for her work on aerospace design, particularly her work on the Agena Rocket Program which paved the way for the Apollo space missions.

Another powerful scientist who not only broke the gender norm, but also pushed against the racial disparity in engineering is Aprille Ericsson-Jackson, born on April 1, 1963, she was the first woman to receive a Ph.D. in Mechanical Engineering from Howard University and the first Black woman to receive a Ph.D. in Engineering from the NASA Goddard Space Flight Center. Aprille Ericsson-Jackson was an integral part of the Navigation and Control Discipline where she helped guide a spacecraft’s orientation and position during missions. She worked on several spacecraft programs as an instrument engineer, overseeing the construction and usage of instruments placed on spacecraft that would collect and analyze samples from their extraterrestrial destinations.

Closer to home, scientists in Marine and Earth sciences are also diversifying the playing field. Ruth Deborah Gates, born on March 28, 1962, was the former director of the Hawai’i Institute of Marine Biology and first woman president of the International Society for Reef Studies. After the 1998 bleaching event that decimated 15% of corals across the world, Gates’s focus upon joining the Hawai’i Institute was on corals and reefs and ways to reduce their decline. In her research, Gates identified “super corals” which survived bleaching and high sea temperatures and she used these as a means to help prevent coral extinction. She was awarded the University of Hawaii Board of Regents Medal of Excellence and to support her research, Coral Assisted Evolution was funded by Paul. G Allen Frontiers Group. Gates was also passionate about public speaking and making a difference in marine science. She appeared in Netflix’s Chasing Coral where she hoped to raise awareness of coral bleaching and inform the public in ways that could prevent this. She died in 2018, during surgery for diverticulitis. Her legacy lives on in the research of corals and reefs and the ways they can resist changes in climate.

Saving marine life is also the passion of biological oceanographer and veterinary technician Antonio A. Mignucci, born in 1964. He is an expert on whales, dolphins, manatees, and seals and he is sought out by public and private organizations for his expertise. He has published and co-authored over 60 peer reviewed publications. He has been a member of the International Union for Conservation of Nature (IUCN) in Switzerland since 1994. In 2004, Mignucci was awarded the Citizen Award by the Puerto Rican Environmental Quality group as well as the Environmental Quality award by the U.S. Environmental Protection Agency. He also formed the Caribbean Stranding Network, an organization that works to care, treat, and rehabilitate injured and stranded marine mammals, sea turtles, and sea birds. Mignucci also continues his work with marine life helping with captive manatees all over the world.

Combining marine science with technology is Lee Sang Mook. He is an expert in tectonic plates, underwater earthquakes, volcanoes, and computational science. He has been a researcher for the Korean Ocean Research and Development Institute from 1998-2003. Since 2003, he has taught at Seoul National University and been the head of Computational Sciences and Technology department. Mook has been nationally awarded for his research and in 2009 he was awarded the Medal of Merit by the Republic of Korea. Despite suffering a traumatic car accident that left him a quadriplegic in 2006, Mook was back to work in less than a year. One of his many contributions to technology was his involvement in developing the Dowell Smartphone Program by Samsung. Mook is also passionate about helping students with physical disabilities and he advocates for their education. He created a calculative science major that focuses on supercomputers suitable for students with disabilities.

Continuing the work of creating spaces for underrepresented groups to be involved in the sciences is Sophia Louisa Jex-Blake in health sciences. She was the first practicing female doctor in Scotland, and one of the first in larger Great Britain and Ireland. She led a campaign for medical education for women and helped the founding of two medical schools for women in London and Edinburgh. Her work as a physician, teacher, and feminist was done at a time when no other medical schools were training women.

Women making history in the health sciences includes Lori Arviso Alvord, known for being the first Navajo or Diné  woman to ever become board certified in surgery. Born in 1958, she is an American surgeon and author, and was nominated as the U.S. Surgeon General in 2013. Dr. Alvord uses new techniques that bring together Navajo healing practices and modern Western Medicine.

One of the STEM fields most notorious for excluding women is the mathematical sciences. Despite it being a male centric field, Jennifer McLoud-Mann dominated mathematics becoming an American mathematician and professor at the University of Washington, Bothell. In 2015 she discovered the last class of convex pentagons to tile the plane. This discovery had been deemed impossible and it greatly impacted the geometric field.

Katherine Coleman Globle Johnson is another important mathematician and former NASA employee whose calculations of orbital mechanics were critical during the first U.S. crewed spaceflights. Her job at NASA at the time was also known as being the “human computer”, where her mastery of complex manual calculations helped pioneer the use of computers to perform these tasks. She is known as one of the first black women to work at NASA as a scientist.

Working in NASA as a woman of color is monumental and this was what Annie J. Easley was doing as an African American computer scientist, mathematician, and rocket scientist. She was one of the first black women computer scientists to work at NASA where one of her many contributions was as a leading member of the team that developed software for the rocket stage at NASA’s Lewis Research Center.

We at The Biota Project hope this STEM discipline-specific highlight of scientists helps to celebrate the contributions of these individuals who despite the difficulties in the STEM fields, were able to persevere and make changes important to our scientific community. All of the scientists highlighted in this three-part series show us that we are slowly working to break the white male heteronormative scientific community and that scientists can be anyone from a woman of color, to individuals with physical disabilities, to people who have undergone a gender transition. What truly matters in the STEM fields is a dedication and passion to innovation and a dedication to how we, as humans can better our communities and planet. We hope you enjoyed learning about these scientists and their mighty contributions to their respective fields. Moreover, we hope this highlight of scientists was inspiring for the underrepresented youth by showing them that there are scientists who are representing them and successful in STEM fields. Likewise, we hope to continue seeing more STEM scientists breaking down the barriers of exclusivity.