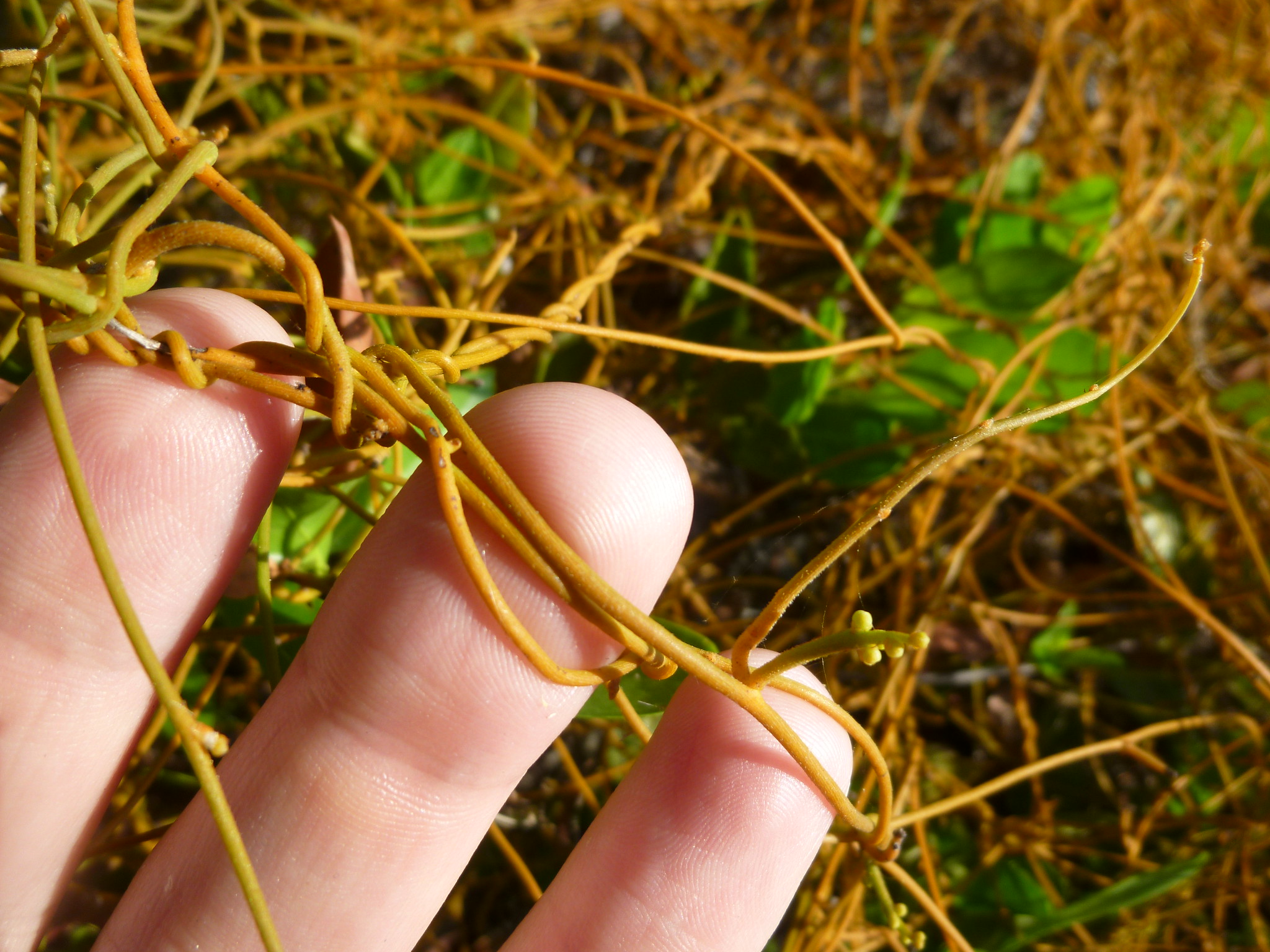 The relationship between a parasite and its host can be a contentious one. Their interests are in direct conflict with one another, so each is always trying to circumvent the other’s plan. This is often thought of as an evolutionary “arms race.” In this ongoing competition, a parasite evolves a more efficient way to prey on the host, and the host adapts in response. These successive adaptations can lead to complex life cycles and intimate species-specific relationships.

New research out of Penn State, conducted by Michael Axtell and Nathan Johnson, suggests that a common parasitic plant has evolved a way to cheat in the arms race with its host. Instead of adopting a more efficient mode of resource extraction, it has found a way to prevent an evolutionary response from its host. The plant in question is a common agricultural parasitic plant called dodder (Cuscuta spp.), a vine that lives according to a simple strategy. Like most parasitic plants, dodder survives by outsourcing certain physiological tasks to its host plants, so that it can expend less energy. Instead of building roots or leaves, dodder twists around its unwilling host and extracts nutrients directly from it.

One way that dodder defends itself from retaliation is by using “genetic weapons.” Host plants, as a response to dodder’s parasitism, will try to kill dodder by producing proteins. These proteins make it more difficult for dodder to steal resources. They may act as toxins in defense against pathogens, produce hormones that elicit a defensive response in the host, or even reinforce the host’s vascular system to protect its water. Dodder, however, has found a way to anticipate this. Before the host has a chance to respond, it launches a preemptive strike against host defenses by building tiny strands of RNA called microRNA (miRNA).

To understand how this works, let’s discuss briefly how proteins are made. When a cell makes a protein, it copies a gene from its DNA into messenger RNA (mRNA), which is then used by a structure called a ribosome to build the protein. Dodder’s miRNAs are experts at disrupting that second step—they are able to bind to the host’s mRNAs, intercepting them and chemically altering their structures. This action renders the targeted RNAs unreadable by the host cell’s ribosomes. So, no proteins are made from them.

“If this process were detrimental to the host plant, we would expect the targeted host genes to change over time, due to natural selection or even due to chance,” Axtell explained in a press release. In other words, the research team wanted to know how host plants were adapting to dodder’s genetic attack. They expected to see evidence of natural selection on both the microRNAs and the targeted host genes. To examine this question, the team looked at miRNAs produced by four different species of dodder. Reading the genetic information in the miRNAs revealed that each species has its own arsenal of miRNAs to deploy. Despite the differences between the miRNA sequences, they all seemed to have common targets.

These targets are genes that are highly conserved between species. This means that the genes are common to many species and do not change much over time. Highly conserved genes typically encode for very important proteins and are often ancestral to the species itself. Host genes targeted by dodder’s miRNA attacks are involved in pathogen defense, hormone signaling, and vascular system function.

Evolutionary changes in these foundational genes are often detrimental. Changing these genes is like pulling a Jenga block from the base of the tower instead of from the top. In addition, dodder’s miRNA is targeting not the whole gene but specific amino acid sequences that are critical to the gene’s function. Host plants’ adaptations to dodder’s miRNA would require removing a key genetic sequence and breaking the resulting protein altogether. This would, in most cases, be fatal for the plant.

The next steps for this research team are to explore the evolutionary origins of dodder’s microRNA sequences and to try to better understand dodder’s delivery mechanisms. “The microRNAs … have undergone natural selection to target these conserved sites,” said Axtell. “We’re looking at the knives that are already sharpened, but what are their origins?”

This study was published in the journal eLife.

—Cameron Duke is a science writer and educator living in the mountains of Western North Carolina. He has an MSc in biology and teaches at Mars Hill University. He can be found running trails in the Blue Ridge mountains and blogging (occasionally) at Beakers, Birds & Brains.