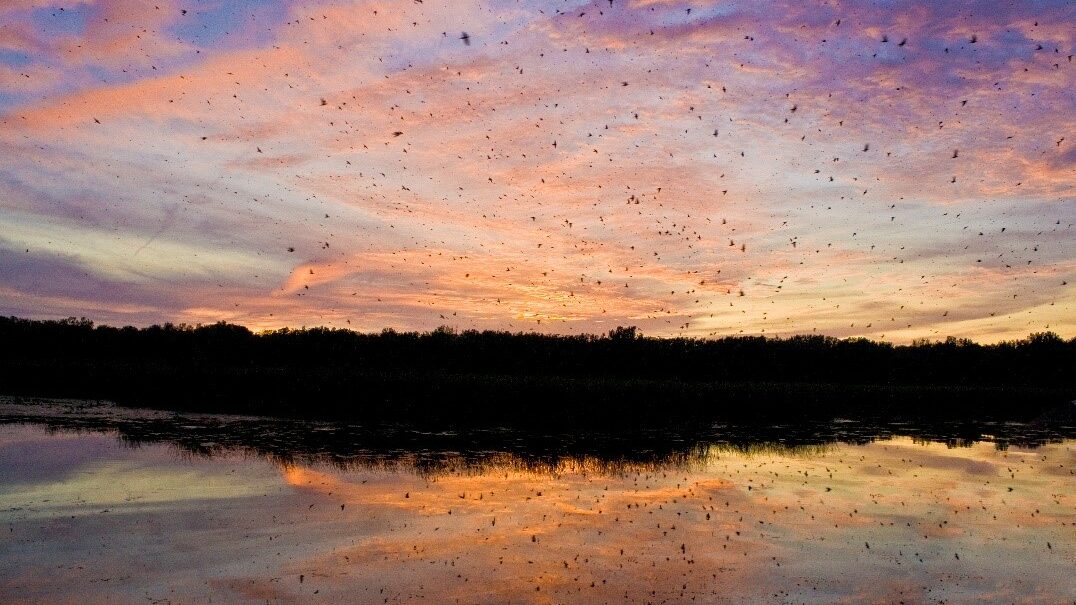 This is part one of three in a collaboration between SciStarter and Career in STEM, in which writers will spotlight different citizen science projects, interview project leaders about their careers, and create educational content for teachers and students. This series is available from Science Connected, Career in STEM, SciStarter, and Discover Magazine.

As the sun sinks low below the horizon and the crisp night air begins to descend, a miraculous sight can be seen in many areas across the continental United States. Hundreds of thousands of birds will suddenly appear at dusk, swarming in vast numbers as they move across the sky before quickly tucking their wings into their bodies and rapidly diving into their shared roost for the night. This behavior is characteristic of the Purple Martin, North America’s largest swallow species. Interest in this particular behavior is also what led to the founding of the Purple Martin Project, a conservation effort designed to help protect this bird species.

In the late months of summer, Purple Martins will gather in large numbers to socialize and rest before beginning their fall migration to the much warmer climate of Brazil, where they will stay for the winter. This behavior is referred to as “pre-migratory roosting.” Groups of both researchers and conservationists have taken an interest in this behavior and its implications for the well-being of the Purple Martin. While the swarms of birds are an amazing sight, the roosts of Purple Martins will often appear in places that people may not enjoy having tens to hundreds of thousands of birds at a time, such as next to parking lots or under bridges. The dedicated people at the Purple Martin Conservation Association (PMCA) have developed the program Purple Martin Roost in an attempt to learn more about Purple Martins, in addition to helping out these roosts that may have appeared in inconvenient areas.

The goal of Project Martin Roost is to identify and locate as many pre-migratory roosting sites as possible, in addition to gaining new data on already existing sites. With this information, PMCA is able to work with communities and other interested groups to make sure that the roosts are located in the best possible areas for both the birds and the humans that are being affected by their presence. Project leaders work to educate the community about the significance and benefits of  Purple Martin roosts, along with relocating roosts to safer locations.

PMCA is a small, nonprofit organization that relies heavily on citizen scientists and volunteers to assist them in collecting the data that is necessary for them to learn as much as possible about the location of these roosts. Volunteers act as the “eyes on the ground” according to Joe Siegrist, the CEO and president of PMCA. According to Joe, “volunteers allow us to cover much more area and are critical to the growth of the organization and the conservation of Purple Martins.”

Project Martin Roost is even expanding its citizen science efforts to Brazil so that they can learn even more about the roosting sites in South America, where Purple Martins spend time before migrating north for the spring and summer months.

The Purple Martin Conservation Association provides an interactive map that makes it easy to get started tracking down Purple Martin roosts in your own community. Advancements in radar technology have helped to locate potential Purple Martin roosts, as their swarms are often so large that satellites are able to register their location as a storm cloud. The map located on the nonprofit’s website provides the locations of both confirmed and unconfirmed locations of Purple Martin Roosts across the nation. To get started, all that citizen scientists have to do is check out the map and see if there is a dot located near them. According to Joe, “people are surprised but there may be a roost located behind a Denny’s or a parking lot close to them.”

With that information, your own scavenger hunt can then begin  when at dusk, you too can look to see the characteristic swarms of birds that indicate a roost located nearby. The tricky part however is attempting to see the exact habitat that these birds return to as a group for the evening, it may even take a few tries to accurately see which cluster of trees or bridge these birds are returning to night after night. Once this habitat is found, that information can be reported to Project Martin Roost and you can begin to look for the next roost!

Molly Schools is a graduate student pursuing her PhD at Temple University in Philadelphia. Her research studies the genetics, evolution and ecology of a group lizards in the Caribbean. Many species in the Caribbean are threatened by habitat loss and her research will allow for more informed conservation efforts targeting these lizards and other similar species. In her limited free time Molly enjoys any activity that will get her outside such as hiking, kayaking and camping.