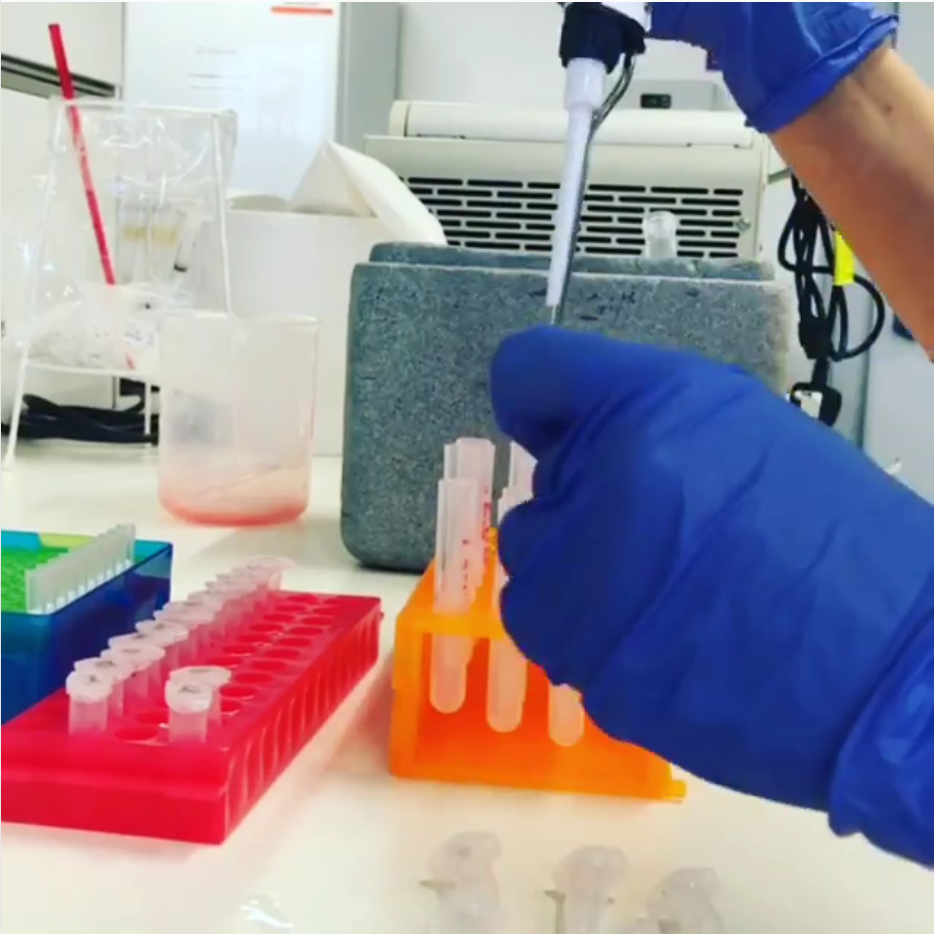 Flow cytometry is a common laser technique scientists use to look at the characteristics of each single cell in a large population of cells.

In flow cytometry, cells are labeled with fluorescent tags that correspond to a specific target; for instance, if we want to look at protein X on a cell, we add a tag that binds to this protein. When the cells run through the cytometer, they are contained in a liquid that flows in single file so that each individual cell can be analyzed. When the liquid passes through a specific point, a laser hits the cell; if the color tag is present, a light is emitted.

You might remember this principle from basic physical chemistry. When light gets “excited,” it jumps up in energy levels and, on the way back down, it emits energy in the form of light at a particular wavelength that corresponds to a specific color!

In flow cytometry, the light signal that is given off is detected by a computer, which translates this signal to electronic data. The data can be represented in many ways on different graphs. Where each cell falls is determined by the strength of the signal that is detected; this is often represented by a positive and negative population, shown by two separate groups: the positive population will have the target expressed and produce a massive light signal; the negative population will not have the target on interest and therefore no signal will be detected.

In the biomedical sciences, samples usually consist of cells. These can be a mixed population of blood cells, such as white blood cells, red blood cells, platelets, or one specific cell type such as monocytes (a type of white blood cell). Using flow cytometry we can separate a sample population based on targets of interest. For example, when looking at cancer cells, scientists may be interested in markers of aggressiveness, metastasis (when the tumour spreads from the primary site), prognosis, and new therapeutic targets. Depending on the complexity of the machine, from three to 18 colors can be detected in one sample. This includes markers on the surface of and inside the cell. To study the proteins located inside a cell, the cell needs to be fixed with a chemical to hold everything together, and then we can create holes along the surface to let the fluorescent labels inside the cell. Lasers are also useful in detecting the size and granularity of the cells, which helps define and stratify our population.

To give an idea of how this works, imagine thousands of cars passing under a bridge each second. As they go by, they are forced to drive in single file, and their key features (e.g., make, model, color) are detected and stored on a computer. Since flow cytometry allows scientists to analyze thousands of cells per second, it is a very powerful tool and can generate a lot of exciting information very quickly! Unsurprisingly, it is commonly used in many areas of scientific research.

RELATED: A DAY IN THE LIFE OF A VASCULAR BIOLOGIST

What flow cytometry is used for?

One of the areas of scientific research where flow cytometry is particularly useful is cancer research. This laser technique can help cancer researchers sort a mixed population of cancer cells to see what proteins they express, and this information can further our understanding of the cancer biology and potentially identify therapeutic targets. Flow cytometry has achieved particular success in research on leukemia, a type of blood cancer. Using flow cytometry to analyze the cancer cells can be an invaluable tool in classifying the tumour subtype and monitoring clinical prognoses. Similarly, marine biologists have also found cytometry extremely useful for studying mixed populations of plankton in the sea. Many organisms in the sea are naturally fluorescent, which means they can be analyzed in a straightforward manner.

Here I am putting my samples into FACS tubes to run them on the cytometer. These tubes are specially designed, and the cells are also in a liquid suitable to pass through the machine. Each sample must be kept on ice during the preparation of the experiment.  When the cells are at a temperature of 4 degrees Celsius they essentially pause, which allows the cytometer to capture exactly what is going on at that moment. These are a cancer cell line that has been treated with various drugs and will be analyzed for markers of cell death.

Flow cytometry is a very interesting and useful tool for life scientists. If you’d like to learn more about it and how scientists are using it, check out the references below for a more in-depth review of current applications!

Kate Warde (@girlinthelab) is a third-year PhD student based in Galway, Ireland. After receiving her BSc. in biomedical science, majoring in pharmacology, she received a scholarship for doctoral studies in the Department of Clinical Pharmacology & Therapeutics. Kate’s research focuses on the cancer of the adrenal gland. This cancer is extremely rare, aggressive, with limited treatment options. Using a cell line model, Kate targets various mechanisms to identify ways to improve current pharmacological therapeutics. Besides cancer research, Kate is dedicated to communicating scientific knowledge as a way of engaging with the community, and she hopes that by documenting online her life as a scientist she will inspire and encourage future researchers!