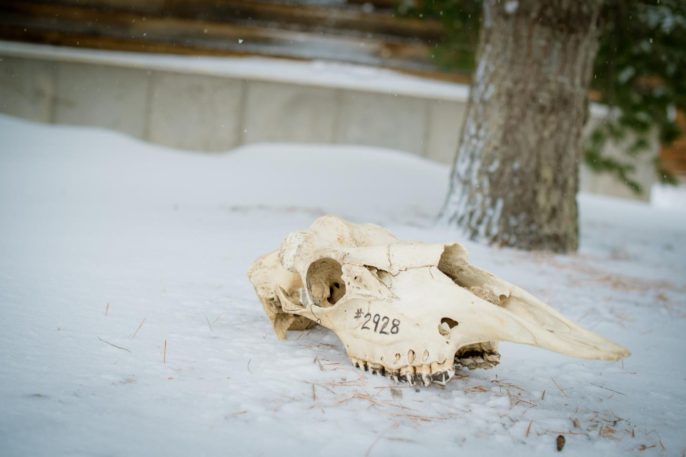 A 60-year-long study reveals that climate change is causing moose to shrink and changing the dynamics between the moose and wolf population of Isle Royale, Michigan.

The effects of climate change are starting to show themselves in strange and unexpected ways. For the cold-adapted moose of Isle Royale, Michigan, a warming environment could literally be causing them to shrink.

According to researchers at Michigan Technological University, the flourishing moose population at the heart of the world’s longest-running predator-prey relationship study is displaying alarming changes that may be most readily explained by environmental pressures. The soon-to-be-released 60-year study of the dynamics between the moose and wolf population of the tiny island in the middle of Lake Superior will show how changes in the numbers of each species have affected the natural ecosystem.

Moose arrived on the island in the early 1900s and lived unchallenged by predators for over 40 years. When wolves crossed an ice bridge from Canada, the impact of the moose on the natural ecosystem began to change.

In 1958, Durward Allen began the Isle Royale wolf-moose project with hopes that learning more about wolf behavior would stop the slaughter that had brought wolves close to extinction at the hands of humans. Over the next several decades, scientists watched closely as the moose population expanded and then shrank again, in a dramatic dance that was the reverse of the boom and bust cycles of the wolf population. The two species were keeping each other in check.

The shrinking moose of Isle Royale

This cycle continued until the early 1980s, when parvovirus ravaged the wolf population, bringing their numbers down to only 14. The population never fully recovered, and scientists guessed that this was a result of extreme inbreeding. In the meantime, the moose population climbed once again. Several more cycles of population highs and lows, forced by harsh winters, hot summers, excessive parasites, and the introduction of new genetic diversity to the populations, bring us to the study conducted by the researchers at Michigan Tech.

The team measured the height, width, and length of over 600 moose skulls collected throughout the island by citizen science volunteers. The results showed a 16 percent decrease in the size of the skulls over a 40-year time period. Upon further study, a pattern emerged that showed that moose that live through a warmer first winter tend to grow to be smaller adults and have shorter lifespans.

According to the lead researcher Sarah Hoy, “The conditions you’re born into have a massive impact on not only how big you are but also how long you’re going to live. This idea isn’t new—what we’re trying to do is establish how climate warming is affecting this iconic, cold-adapted species.”

Compared to populations in places with similar climates such as Minnesota, the Isle Royale moose numbers are significantly higher. The number of moose in northern Minnesota has shrunk by half over the last 12 years, and scientists believe that climate change has played a big role in the die-off. The spread of parasites, specifically a fatal brain worm that is spread by white-tailed deer, has increased as warmer temperatures allow the deer to move farther north into territory occupied by the moose.

“The moose populations in northern Minnesota have tanked,” Hoy says. “Climate is considered a main driver, whether it’s direct through warmer winter temperatures causing heat stress and influencing the nutritional condition of moose or indirectly by establishing more favorable habitat for white-tailed deer.” Moose on Isle Royale now number over 1,600. That’s nearly triple the population from a decade ago thanks to the number of wolves dropping to only two individuals.

So what’s causing the Isle Royale moose to shrink? Past research has shown evidence that warming climates affect the body size and composition of certain species, but little has been done to study long-lived vertebrates like moose. While these body composition trends appear to be linked to changing climate, no one is really sure if the changes are a direct negative effect of climate change, or if they represent an animal’s ability to adapt to the changes. Smaller body size is typically seen as an advantage in warmer weather because it makes it easier for an animal to regulate its body temperature.

While the study’s results suggest that the change in skull size is not a result of adapting to the warmer winters, the Michigan Tech team remains unsure of the exact cause of the observed relationship between warmer winter temperatures and body size, growth, survival, and lifespan of the moose.

Researchers think that it may be due to pressures from an exploding population and a warming climate. In order for the ecosystem to remain balanced, there must be enough resources to sustain all of the individuals. As the population grows without predators to keep it in check, the moose may struggle to find enough food. This competition could lead to malnutrition, stunted growth, and a shortened life expectancy.

The National Park Service is currently studying the possibility of introducing more wolves to the island to help keep the moose population in balance. The researchers believe this might be a better outcome for the moose than what is currently happening due to other stressors.

“Decreasing skull size may be an early indicator of population change,” says John Vucetich, one of Hoy’s collaborators and a professor of ecology at Michigan Tech. “We’re likely looking at a population in transition, and the healthiest transition would almost certainly involve restoring wolf predation to Isle Royale.”

While many questions about the effects of climate change remain unanswered, researchers will continue to look to the moose and wolf populations of Isle Royale as an ever-evolving case study for the influence of a warming world on predator-prey dynamics.

—Emily is a freelance science writer and municipal water resources educator. Her goal is to make science accessible and interesting for everyone. She has worked as an outdoor environmental educator, a science teacher, and a professional communicator and trainer. You can follow her on Twitter @riseandsci.

Featured image: The researchers measured the length, width and height of moose skulls to study the impact of climate change on the iconic Northwoods species. The team measured 662 moose skulls and observed a 16 percent decrease in size over 40 years. Credit: Sarah Bird/Michigan Tech.