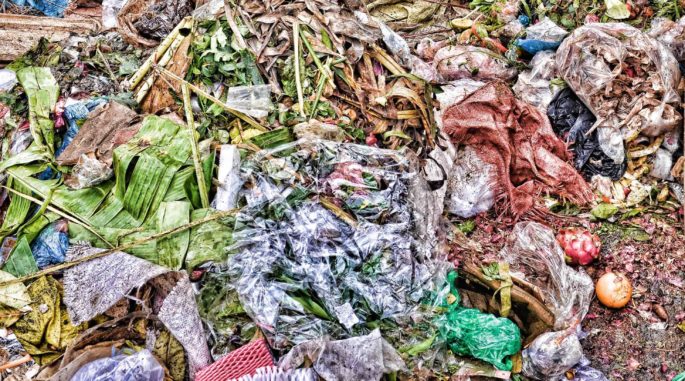 Does that food smell rotten? Researchers have developed a way to detect rotten food odors that are too faint for the human nose.

One whiff of spoiled meat is usually enough to let us know that we should definitely not eat it. But what about those leftovers that have been in the refrigerator for a few days and still smell ok? We could throw them away out of an abundance of caution, but that becomes an expensive and wasteful practice. Or we could cross our fingers and go ahead and eat them.

According to the EPA, Americans disposed of more than 38 million tons of food waste in 2014, and about 95 percent of that waste ended up directly in landfills or incinerators. The amount of food waste will only increase as our population grows. The Centers for Disease Control and Prevention estimates that approximately 48 million Americans get sick from foodborne diseases each year. Of those people, 3,000 die from their illnesses. Instead of letting us take a chance on food poisoning, researchers in South Korea have developed a new bioelectronic “nose” that could help us detect foul rotten food odors too faint for us to sniff out.

Food begins spoiling as soon as it’s killed or harvested. Before food preservation became the norm, hunter-gatherers would eat food immediately and then move on to the next food source. Once humans developed techniques such as refrigeration, drying, and salting, humans began to stay in one place and live in communities. Although many preservation methods are in use today, many foods still have an extremely short shelf life.

The smell of death and decay

When they die, animals quickly start producing toxic chemicals known as diamines. These chemicals are responsible for the tell-tale scent that makes our stomachs churn. Two of the most common diamines associated with food spoilage are the aptly named cadaverine and putrescine. Cadaverine, which smells like rotting flesh, provokes different responses from different animals. For example, vultures are drawn to the smell as a source of food. Some animals such as carrion beetles use the smell to help guide them to where they should lay their eggs so their offspring can eat the flesh. Humans, on the other hand, are strongly repulsed by cadaverine. Unfortunately, we cannot detect it at very low levels in rotten food that might be harmful if eaten.

The researchers at Seoul National University set out to develop a way to use nanotechnology to detect rotting odors that are too faint for the human nose. To help facilitate this process, they looked to the discovery of a specific receptor for these smells. That breakthrough came in 2013 when a team of scientists from Germany and the United States isolated trace amine-associated receptor 13c (TAAR13c). This receptor, first found in zebrafish, picks up on extremely low concentrations of cadaverine and causes fish to actively avoid the source of the smell.

In order to make the TAAR13c receptor useful, the South Korean scientists had to find a way to isolate it and reproduce it in the lab. They turned to one of the most common species of bacteria in warm-blooded animals: E. coli. People often associate E. coli with being a foodborne pathogen that can cause illness, most commonly either diarrhea or illness outside the intestinal tract. These types of E. coli can be passed on through contaminated water or rotten food, or through contact with animals or people. But most E. coli bacteria are harmless and in some cases even beneficial. The scientists used E. coli because it can quickly and easily make large numbers of useful proteins. But they soon ran into a problem: the receptor itself must be housed inside a membrane to work properly. So the scientists decided to try placing the receptor inside a nanodisc, which is water-friendly and mimics a membrane structure.

After producing copies of the receptor in E. coli, the researchers assembled the nanodiscs and then placed them on a carbon nanotube transistor. The idea behind the transistor was that when a scent molecule was detected by the TAAR13c receptor, it would produce an electrical charge that would close the circuit on the transistor and indicate the presence of an offending smell.

To test their effectiveness, the “noses” were then placed in the presence of purified test compounds as well as decaying meat such as salmon and pork. The discs were successfully able to detect cadaverine at very low levels, and they could detect when the levels of scent molecules rose, indicating the progression of food spoilage.

Nanotechnology is a rapidly growing field with a wide range of applications in the fields of medicine, electronics, environmental science, and more. Because most biology happens at the nanoscale, researchers in biological sciences often look for ways to integrate nanotechnology into their work. Inserting the TAAR13c receptor into a nanodisc opened up a plethora of possibilities for its use. While food spoilage detection for health purposes is the most obvious and perhaps easiest use of the nanodiscs, the researchers also envision that the nanodiscs could be used in disaster relief efforts in locations that might be too dangerous for people or dogs to go into to locate bodies.

Emily Rhode is a freelance science writer and municipal water resources educator. Her goal is to make science accessible and interesting for everyone. She has worked as an outdoor environmental educator, a science teacher, and a professional communicator and trainer. You can follow her on Twitter @riseandsci.