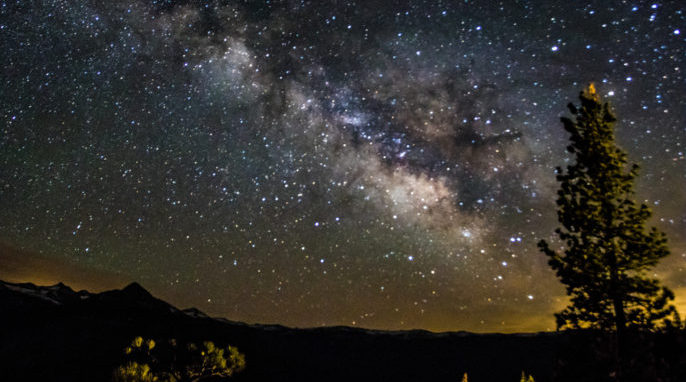 Take an adventure through the universe through the lens of your telescope! Author Will Kalif tells us about his book, See it with a Small Telescope.

The night sky is a deep, rich field of stars. Under normal dark sky conditions, when there is a new moon, there are approximately six thousand objects visible to the naked eye. We often don’t realize it, but scores of these objects are not actually stars! They just appear to be. Galileo made this remarkable discovery when he turned his telescope to the heavens, and you will make this discovery with yours.

A telescope is kind of like an automobile. When you first try it out, everything seems very complicated. But, with a little practice, you will be driving your telescope around the universe with ease.

RELATED: TELESCOPE ACCESSORIES: WHAT DO YOU REALLY NEED?

When it comes to small telescopes, each type has its advantages and disadvantages. A refractor is easy to use and generally inexpensive. This type of telescope is very recognizable, with its long tube, a lens at one end, and an eyepiece at the other end. The reflector, which has a mirror, is a very economical telescope; it will give you a larger aperture and more light-gathering power for less money. Newtonian and Dobsonian telescopes are both reflectors. The catadioptric telescope is the most expensive, but they will give you the best performance, along with good portability. Catadioptric telescopes are small in size but big in performance.

Parts of a Telescope

Every telescope has two important parts. The first is the optical tube assembly (OTA). This is where all the telescope action occurs. The OTA holds the lens or mirror, as well as the eyepiece. When you visualize a telescope, you’re probably thinking of the OTA.

The second is the mount, which is what the telescope sits on. The mount is very important because it holds the telescope steady and at a comfortable height, making it easy to use. There are three common types of mounts: the alt-azimuth, equatorial, and Dobsonian.

The alt-azimuth mount is the simplest and easiest to use. It allows your telescope to be moved up, down, left, and right—just like how you would move a camera if it were mounted on a tripod.

Specifically designed for astronomy use, the equatorial mount moves the telescope in a circular motion that mimics the rotation of the earth.

When viewing through the telescope, what you do with your eyes is important. Here are a couple of “eyeball” tips that you will find very useful. Of course, these tips are all for after you spend at least twenty minutes in the dark so your pupils open up as far as they can go.

First, look through the eyepiece with both eyes open just like experienced amateur astronomers do it. It sounds strange and it might be uncomfortable at first, but this really helps. This is because when you close one eye, the muscles you use to squint cause a slight vibration in the open eye. And for extremely faint objects, that vibration makes a difference. Thus, having both eyes open will help you to see better. Not everyone can get comfortable doing this, but give it a try to see if it works for you.

Second, practice not looking directly at the object in the telescope. Instead, look a little bit to the side of it and see the object from the side of your eye. This brings the light to more sensitive areas of your retina. The rods and cones at the exact center of your retina are less sensitive, particularly to black and white.

Give this technique, called averted vision, a try. You will be surprised how looking a little to the side of the object reveals more details. It is also a very handy technique you can use if you want to do sketches or drawings of celestial objects as you see them through your telescope.

Navigating the Sky with your Telescope

An easy way to start is by identifying a constellation or asterism (a group of stars that make up a recognizable pattern or shape but is not a constellation) near the object you’d like to observe. The best constellation to start with is Ursa Major, which is commonly known as the Big Dipper. To find the Big Dipper from anywhere in North America, all you have to do is face north. A compass would be helpful for this. Polaris is another useful guidepost, as is Cassiopeia, located on the other side of Polaris from the Big Dipper.

Another useful marker in the sky is the ecliptic. The ecliptic is a thin band that traces the sun’s path. You can imagine it like a ring around the sun that stretches out into the night sky. All planetary objects, including the sun and the moon, travel within this ring. This makes it much easier to find the planets because they are not just anywhere in the sky: They are always within the very narrow band of the ecliptic.

A Look at M42: The Orion Nebula

Once you know your way around the sky a bit, you can star hop to find your object. With this technique, you point your telescope at a bright and recognizable star, constellation, or even part of a constellation that is near the desired object. Then, you move the telescope to another star that is even closer to the destination object. You can hop from star to star until you arrive at M52.

To star hop to M52, you could locate the bright star Sirius in Canis Major. In the star chart, that’s the big black circle in the bottom left corner. From there, hop up to Saiph, Orion’s bottom left boot. M42 is between Saiph and Alnitak, the leftmost star in Orion’s belt.

Here’s what it looks like through the telescope lens:

So there you have it! You can use this strategy to find almost any object in the visible universe with a small telescope. Even using binoculars, you can find some amazing celestial objects, like planets, galaxies, and nebulae.

I hope this short guide has inspired you to start exploring the world around you, and the world beyond our world. For even more tips and more objects, you can buy See It With a Small Telescope, available from Ulysses Press this winter.

Will Kalif is a writer, webmaster, and an avid telescope enthusiast currently living in New England. He worked a full career in a variety of fields including robotics, computers, and electronics. He has been passionate about telescopes and the wonders of the night sky ever since he received his first telescope as a teenager. For several decades now, he has been making and using his own telescopes and helping other people enjoy the various things that can be seen on a dark and starry night. You can learn more about telescopes, telescope making, and astronomy by visiting his website at telescopenerd.com. His new book, See It With a Small Telescope, will be available wherever books are sold in November, 2017.