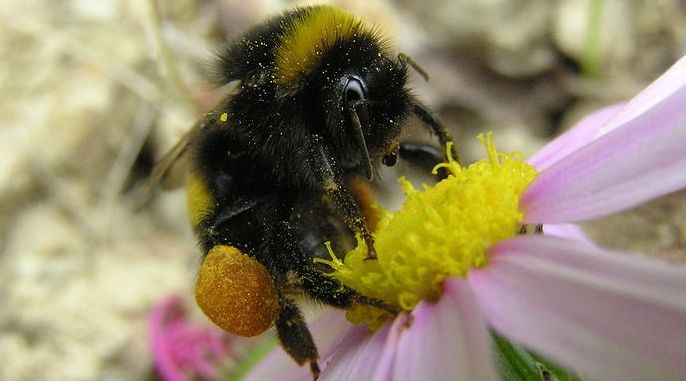 Given the continued growth of the human population, it’s no surprise that our behaviors impact plants and animals. But what might be alarming are the ways we harm these species. Habitat loss and pesticide use have been shown to have devastating effects on pollinator populations worldwide, but researchers from the University of Toronto have found a new and unexpected way that humans are killing off bumblebees. And according to their study, the potential for bee deaths will only get worse as our demand for pollinated crops intensifies.

Five species of bumblebees are raised commercially and used to pollinate at least 20 different crops. They are a key part of a multibillion-dollar worldwide industry. Much like the honeybee, wild bumblebee populations have suffered major losses in recent years. One idea was that commercially raised bumblebees used to pollinate crops in greenhouses were causing what scientists call “pathogen spillover” or passing on diseases to their wild counterparts when they escape from greenhouses and pollinate wild flowers and crops. The newly introduced diseases would then cause bee deaths and eventually colony collapse. Until now, there was no real evidence that this was actually happening.

Predicting the spread of disease

To test this idea, the team at the University of Toronto created a mathematical model to show how pathogen spillover might be happening, from commercial greenhouses to native bumblebee populations. They guessed that infected bumblebees leave pathogens at flowers and that the pathogens are then picked up by other bees and spread to other flowers. The researchers set up their model based on laboratory experiments done on the spread of Crithidia bombi, a common pathogen that infects bumblebees and is known to spread from commercial to wild bees. The model predicted that up to 20 percent of wild bumblebees within 2 km of greenhouses would become infected with C. bombi. But the model did not stop there. It also predicted that a “travelling wave” of disease would suddenly appear and infect up to 100 percent of wild bumblebees at a staggering rate of 2 km per week.

Bee disease in the real world

The researchers needed to find out if the predictions of their model were accurate, so they went out into the field to take samples. They tested for the presence of C. bombi in wild bumblebees at different distances around three industrial-scale greenhouses. While they did not find the “travelling wave” of disease that the model showed, the amount of C. bombi found near the greenhouses was consistent with the predicted levels. Pathogen spillover was happening, and C. bombi had infected several wild bumblebee species. Not only were bees closest to the greenhouses more likely to be infected, but bees found right next to greenhouses also had significantly more pathogen cells in their guts than bees found further away.

[tweetthis]Researchers have found a new and unexpected way that humans are killing off bumblebees.[/tweetthis]

The amount of pathogen spillover depended on many factors. The more cells that were passed on, the higher the rate of pathogen spillover. Pathogens that remain in the environment for longer spread more than those that die out quickly once they are introduced into wild bee populations. Even though the researchers never observed it happening in the wild, the model showed that even diseases that build up slowly at first can quickly result in a large-scale epidemic among wild bees.

Researchers note that their model “is only a first step in understanding the dynamics of pathogen spillover” from commercial to wild bumble bees. They suggest that more studies are needed on how diseases are passed on at individual flowers in order to understand this process better. In the meantime, evidence points to pathogen spillover being a likely contributor to the deaths of wild bumble bees in North America.

So how can pathogen spillover be prevented? Better management of commercial bees would help reduce the spread of disease across populations. Keeping the bees separated when workers move in and out of greenhouses could be one way to keep the bees from escaping. In their study, authors suggest that “simple mesh screens, fitted to the ventilation systems of greenhouses, would minimize both the loss of costly commercial pollinators and the entrance of wild species.” Finding ways to reduce the parasite loads of commercial bees could also be beneficial in the event that they do escape and infect wild bees. Whatever mechanisms are used, preventing the further devastation of bee populations is essential: billion dollar industries, ecosystem services, and the survival of our current food systems depend heavily on them.