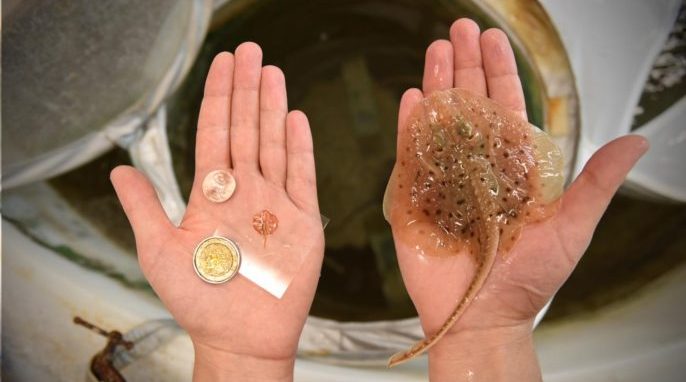 Yes, researchers have created one of the things we have all been waiting for: A robotic ray. It represents the latest in tissue-engineering.

This isn’t a rubber stingray that works like a radio-controlled car or a programmable rover. This robotic stingray is powered and guided by light-sensitive rat-heart cells. Yes, you read that correctly.

The project demonstrated a new method for building bio-inspired robots by means of tissue engineering. Batoid fish, such as stingrays, are recognizable by their flat bodies and long, wide, winglike fins. These fins move in energy-efficient waves emanating from the front of the fin to the back, allowing batoids to glide gracefully through water. Batoid fish look like they are flying through the water, rather than swimming.

How Does the Robotic Ray Work?

Inspired by the shape and movement of stingrays, the research team set out to build a miniature, soft-tissue robot capable of moving with the same grace and efficiency as a real stringray. They started with a skeleton made of gold and shaped like a stingray’s cartilaginous skeleton. They then covered the gold skeleton with a layer of stretchy polymer. Along the top of the robotic stingray, the researchers carefully placed heart-muscle cells taken from a laboratory rat. When stimulated, the rat cells caused the robotic stingray to contract its fins downward. The gold skeleton stores some downward energy, which is later released as the cells relax, causing the fins to rise back up, ready to repeat the process.

But that’s not all. The research team genetically engineered the rat muscle cells to respond to light cues. The direction and speed of the little robotic stingray can then be controlled with pulses of light.

This research is published in the journal Science.