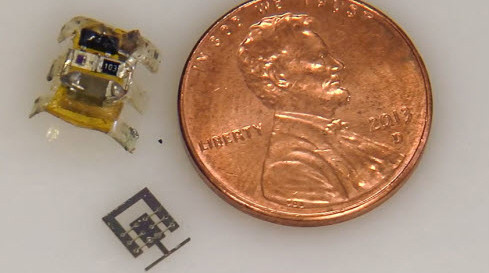 Imagine an army of tiny robots no bigger than a penny scrambling through the rubble of a disaster site to search for victims and to assess the damage. That is the vision of engineer Sarah Bergbreiter and her research team at the University of Maryland, who are building micro-robots with support from the National Science Foundation (NSF).

The researchers are currently testing a variety of different materials and designs on bigger robots before scaling them down to the final size. But even the larger prototypes of these robots are so small that the research team has to use microscopes to build them.

Insects are serving as the inspiration for these micro-robots, starting with the legs. Fleas can jump 200 times their own height, ants can move 40 times their body length, and cockroaches can out maneuver a human with a rolled-up newspaper. With these feats of insect strength, speed and agility in mind, the team is currently designing legs that will, according to Bergbreiter, “allow a millimeter-scale robot to traverse rough terrain at high speeds.”

Bigger isn’t always better in delicate situations, and an army of micro-robots could be just the thing for finding survivors trapped in unstable conditions after an earthquake or other disaster. Bergbreiter sees micro-robots as tiny sensor platforms that are capable of carrying such things as surveillance cameras, or surgical tools, and able to monitor the structural safety of buildings and bridges, or participate in search and rescue missions.

“You have a bucket full of these small robots. You dump them into rubble after a disaster and they have just enough energy to find somebody and say, ‘Hey! Dig over here!’” Bergbreiter predicts.