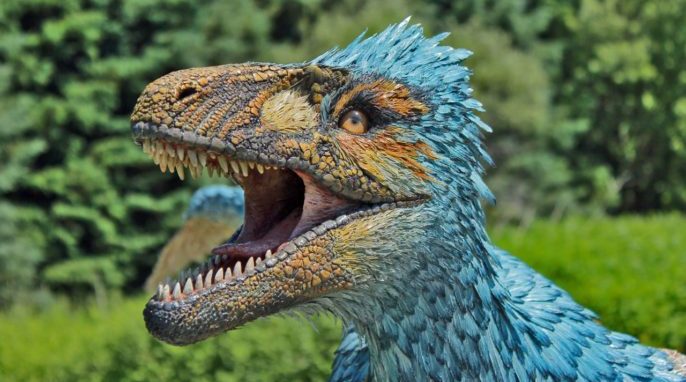 David Alden is a sculptor who, in his latest project, combines his enthusiasm for paleontology and fine arts. Over the past two years he worked with a team to create a gorgeous life-sized sculpture of Dromaeosaurus albertensis, a dinosaur that lived during the Late Cretaceous period in what became the western United States and Alberta, Canada. I spoke with Alden about his motivations for undertaking such a project, how to fact-check a sculpture, and what’s next on the horizon.

GotScience: What first inspired you to do large-scale reconstructions of dinosaurs?

David Alden: I had been collecting artwork of prehistoric life for a while when I decided to try my hand at doing some sculpting. At first I would attempt to imitate the style of the sculpture in my collection that I particularly admired. It took some time to develop the various techniques, but after some practice, I enjoyed sculpting dinosaurs myself and eventually opened Saurian Studios.

The idea of bringing an extinct animal to life fills me with wonder and enthusiasm. Of course, it is an artistic recreation, but provided everything is scientifically accurate, it is like a window into a long distant past. 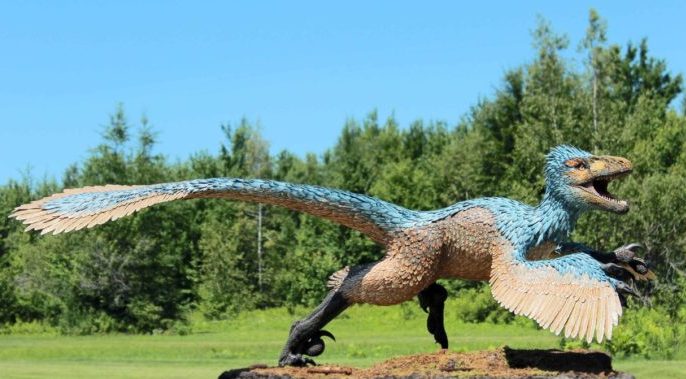 GS: Why Dromaeosaurus in particular?

DA: I wanted to do a series of sculptures representing animals with a focus on those species that have been found in Canada. Dromaeosaurus has not often been represented in artwork, especially in three-dimensional form. This inspired me to create a restoration that gave a dynamic and pleasing representation of this amazing animal, while also, more importantly, applying the very latest scientific knowledge. I have always strived to incorporate the most up-to-date scientific information and discoveries in any restoration work I have undertaken. 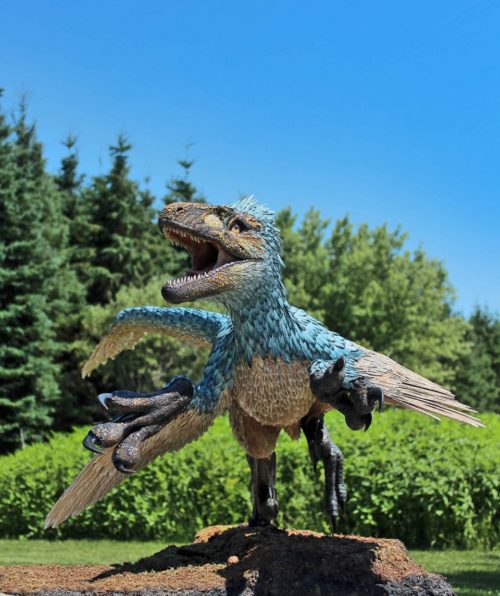 GS: What research was involved in the reconstruction process? How did you determine the necessary dimensions, colors, and materials?

DA: As with any project of this nature, a thorough review of the literature regarding Dromaeosaurus albertensis was involved. In addition, I turned to some of my old friends in paleontology, such as Philip Currie and Jim Kirkland, both of whom have valuable knowledge on the dromaeosauridae [family of dinosaurs] to contribute. Other experts, such as Jacob Vinther, were immensely helpful in sharing the most recent research on feather structures and the placement of the feathers. Many fossil discoveries were examined. I was very fortunate to be able to view some that only select few have been privy to examine.

Fellow artist friends generously shared their own gathered research. Emily Willoughby was very kind to offer extensive information she has used for her own amazing restoration paintings. For the coloration, we drew from modern birds, and we gave consideration to the environment in the Late Cretaceous of Alberta, Canada. Many birds, including ground-dwelling, non-flying birds, often have brightly colored areas on their feathers. These seem to be used primarily for display among their own species. Evidence of mating and courting displays have been found in the fossil record, confirming that dinosaurs had these types of rituals and displays, paving the way for what we see in today’s birds.

GS: How long did the project take?

DA: From beginning to end, the project was over two years in duration. If you count the preparatory research, it took three years. One of the reasons the project took so long is that we developed new techniques for creating very realistic, durable, and flexible feathers that are less likely to be damaged when the sculpture is transported. Each feather was individually sculpted and applied to the underlying sculpture. We did a complete reconstruction of the animal underneath the feathers, from the bones to surface anatomy. All reconstructions that I have been involved with are done in this manner. 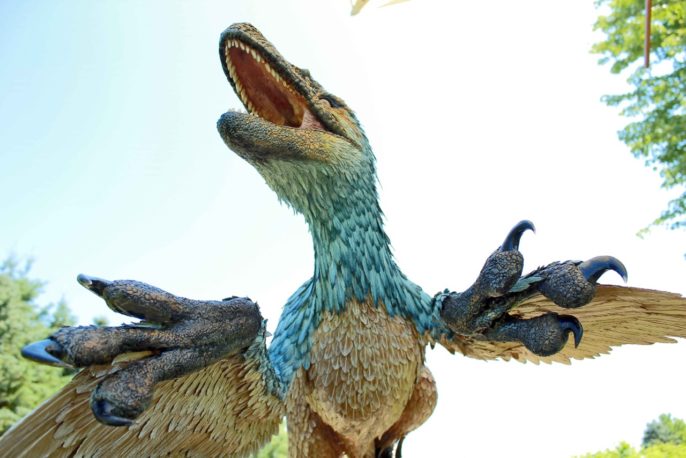 GS: What materials did you use?

DA: The sculpture itself, which is about seven feet long, has a steel armature underlay that provides uncompromising strength. The claws were made from solid bronze. We actually had to be careful when walking around the sculpture. Each of us has had an encounter with the claws. Fortunately, my own encounter only resulted in a tear in my T-shirt.

GS: Who else was involved in the project?

DA: For this project, I worked with the team behind ancientplumage.com. All of us were directly involved in the creation of this sculpture, each playing our role to bring this animal to life artistically.

[tweetthis twitter_handles=”@shaynakeyles”]It is vital that the public be able to see the true, scientifically accurate appearance of dinosaurs.[/tweetthis]

GS: Where can the reconstruction be viewed?

DA: Currently, Dromaeosaurus resides near Ottowa, Canada, which is where it was created. Soon, it may well be adorning the exhibit halls of a museum, adding to their dinosaur halls. We undertook this project so the resulting sculpture would be placed in a museum, where the public can enjoy it and learn from an up-to-date restoration of Dromaeosaurus. Sadly, most museums still have restorations that do not take the very latest paleontological data into account. We hope to help in correcting this. Especially after the successful fourth installment of the Jurassic Park franchise, it is vital that the general public be able to see the true, scientifically accurate appearance of dinosaurs.

GS: Do you have any upcoming projects in the works?

DA: We are creating more dinosaur restoration sculptures. The next is slated to be Troodon formosus. We have already begun the formative stages of this piece, along with a Deinonychus restoration. The main anatomical and feature work are complete on these two sculptures; mainly surface skin detailing remains. It is truly a great joy to be involved in this work. I have always held a great fascination with prehistoric life since I was a young child. Bringing these majestic animals back to life, in an artistic sense, is very fulfilling.

All images courtesy of David Alden.