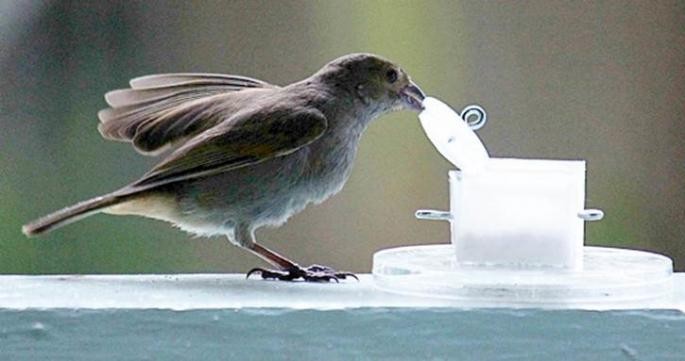 Aesop’s fable of the country mouse and the city mouse cautions that city life, while certainly more exciting than the “modest life with peace and quiet” found in the country, is too full of “danger and strife” to truly be worth it. Researchers at McGill University in Canada have discovered that for some species of birds, this may not be true at all.

The Barbados bullfinch, Loxigilla barbadensis, is an exceptionally innovative species of bird that is found in both urban and rural areas of the small island nation. As more of the world’s rural areas become urbanized, habitat loss increasingly threatens biodiversity. By studying the bullfinches’ responses to certain tasks as well as looking at their immune system response, the researchers hoped to understand traits that help certain animals survive in urban environments.

After being caught by mist nets, the birds were put through a series of tests to assess their problem-solving skills, their boldness, their reaction to unfamiliar objects and their ability to choose between two different colors.

First, to test the birds’ boldness, researchers presented the birds with an open Petri dish full of seeds and then timed how long it took them to feed from the dish.

Then, researchers tested the birds for neophobia, the “fear of anything new.” They placed an object that the birds had never seen before next to their feeding dish, and watched the birds to see how long it would take them to eat from the dish, or if they would avoid the dish altogether for fear of the new object.

The most complicated task that the birds were challenged with was to figure out how to open a container in order to access food. Researchers constructed a small container with both a lid and a drawer and filled it with bird food. The birds could get to the food by opening the lid or by pulling out the drawer. Each bird was given a maximum of fifteen 5-minute tries to get to the food. The scientists counted how many times the birds were able to access the food during that cycle. This test gave them a clear picture of each bird’s problem-solving abilities.

Finally, researchers presented the birds with two dishes on wooden platforms that were painted either green or yellow to test for their ability to tell the difference between colors. The birds chose which dish to eat from: the one that they picked first was considered their preferred color dish, the other one became their “rewarded” color dish. Researchers glued seeds to the bottom of the bird’s preferred color dish and put loose seeds in the rewarded color dish. For each trial, the dishes were presented to the birds at the same time. The birds had five minutes to choose a dish. If the birds chose the rewarded color, they were allowed to eat for 15 seconds. If they chose their preferred color, the dishes were immediately removed. Researchers counted how many times it took the bird to choose the rewarded color seven times in a row.

RELATED: RAVENS COOPERATE, BUT NOT WITH CHEATERS!

Lastly, researchers injected the birds with a compound designed to measure their immune response. The injection caused the birds’ wings to swell, and the researchers were then able to measure how large the swelling was using a very small caliper.

Overall, the urban birds proved to be better at problem solving and bolder than their country counterparts. Their ability to adapt to their urban surroundings allows them to use resources that might only be available because of the presence of humans. It also helps them survive in a world where eating might mean grabbing scraps from the table of an outdoor café in proximity to people.

Surprisingly, city birds turned out to be warier of strange objects than rural birds. Researchers are not sure why urban birds were both more neophobic and bolder, but concede that more studies are needed to come to a definite conclusion.

Urban birds also had a stronger immune system than rural birds, which was surprising to the researchers. They had guessed that the birds would be either smarter or healthier, but not both. The only test that showed no difference between the two types of birds was the color test.

The study of the bullfinches was the first ever to find significant cognitive differences between the behaviors of urban birds and rural birds. The researchers believe that on a small island like Barbados, studying birds living in both urban and rural environments might hold the key to understanding how some animals deal with habitat changes brought about by humans.

This research is published in the journal Behavioral Ecology.