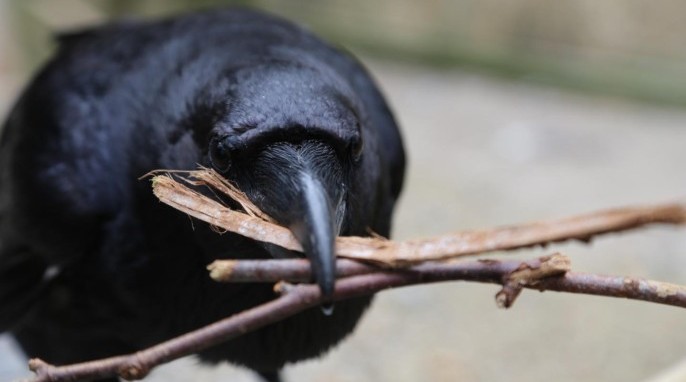 Several recent studies have revealed that ravens are among the most intelligent species of birds and even species in general. Now, cognitive biologists from the University of Vienna add teamwork, cooperation, and avoidance of cheaters to the ravens’ already lengthy list of skills.

“From the wild, it was already known that ravens are able to cooperate when, for example, mobbing predators. But using an experimental set-up working with captive ravens now allowed us to investigate how exactly they do so,” says Jorg Massen.

In Massen’s experiment, two ravens were required to simultaneously pull the two ends of one rope to slide a platform with two pieces of cheese into reach. If only one raven pulled, the rope would slip through the loops on the platform, leaving the birds without any cheese. With no training, the ravens spontaneously solved this task and cooperated successfully. However, it turned out that they didn’t do equally well with all ravens, and that they would rather work together with their friends than with their enemies.

Do we give ravens enough credit for being clever? Perhaps not. Now and then, one of the two birds would cheat. Instead of taking only its own reward, it also stole its partner’s cheese. The victims of such cheats immediately noticed and refused to participate in further trials with the same cheating partner. “Such a sophisticated way of keeping your partner in check has previously only been shown in humans and chimpanzees, and is a complete novelty among birds,” explains Massen. Cheaters never prosper.

These research findings are published in the journal Scientific Reports.

Top image: Ravens cooperate with each other to get a piece of cheese. (Copyright Jorg Massen, Universität Wien)