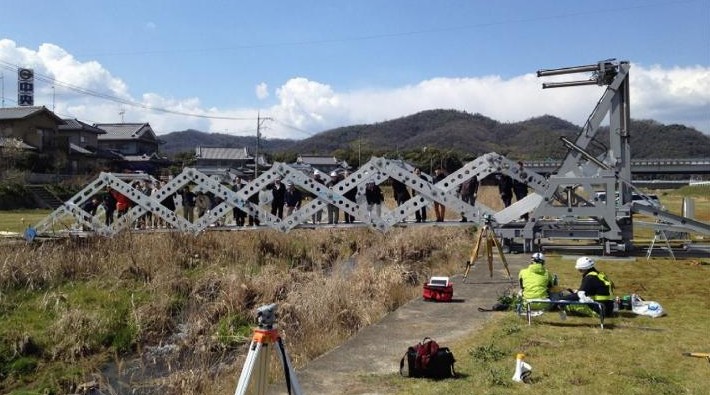 Earthquakes, floods, tsunamis, and landslides, and other natural disasters can damage infrastructure, such as bridges. What can be done to aid the rapid evacuation of survivors and delivery of aid? Enter the Mobile Bridge® Version 4.0 (MB4.0), a new concept in temporary bridge construction.

In the aftermath of a natural disaster, rapid repair of infrastructure is crucial. Expanding in just five minutes and capable of carrying automobiles, MB4.0 is being hailed as the world’s fastest, largest, strongest, and lightest expanding temporary bridge. It’s a new type of foldable, deployable temporary bridge with a scissor-like mechanism. Because the bridge and its lanes are expanded simultaneously, the bridge is ready for car and foot traffic as soon as it is fully extended. This is especially important for time-sensitive situations during or after a disaster.

Recently, the creators of the bridge tested it over a river to determine its viability for practical use. During the test, the bridge was set up without any foundation work, and a vehicle could easily travel across it.

MB4.0 has a structure that enables the temporary bridge to expand while retaining strength. The idea for the design came from academic studies based on origami (Japanese traditional paper folding), which has attracted the attention of engineers in a variety of fields.

Ichiro Ario, Assistant Professor at the Institute of Engineering, Hiroshima University, developed MB4.0 to have improved mobility and functionality, as well as decreased weight. Therefore, this next-generation temporary bridge is more transportable and easier to set up without any foundation construction or crane operations. As a result, it is also less costly.

“From this test of a new bridge concept, the next generation of bridge technology starts on a new stage in the field of bridge engineering. It is possible to use a real deployable and smart bridge with a scissor-type bridge system using this structural theory. I will further promote the development and evolution of MB4.0 in the future. Making MB stronger, longer, lighter, more compact, and quicker to set up will promote the development of infrastructure construction technology in general,” Ario says.

The MB4.0 viability test results were presented at a symposium of the Japan Society of Civil Engineers (JSCE) on June 23, 2015.