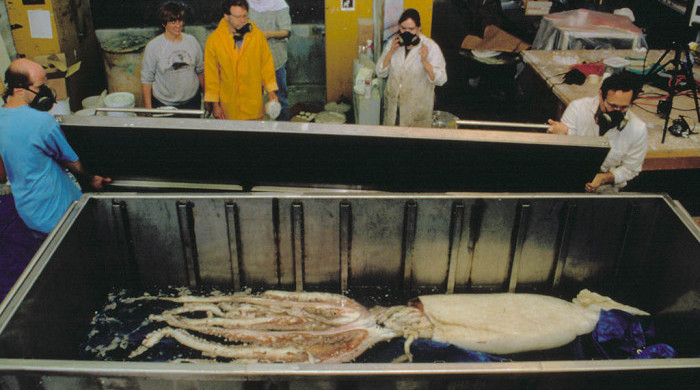 Find out how natural history museum staff transport the body of a giant squid. These animals grow to the size of a school bus, or longer.

This episode of the Shelf Life video series focuses on a simple transportation problem– how to  transport the body of a rare giant squid. But long before they were a quandary for customs officials, these mysterious cephalopods fueled fear and folklore all over the world. While they may not breathe fire or devour large ships, the animals that inspired their mythological counterparts are no less fantastic.

The Squid and the Kraken

Though giant squid won’t reach the size of the mythological gigantic kraken— often depicted demolishing boats with its massive tentacles– they are formidable animals nonetheless. The largest squid are believed to measure more than 40 feet from the tips of their tentacles to the end of their mantle, or body. That’s the same length as the largest whale shark ever measured, or a full-sized American school bus.

The inside surfaces of the giant squid’s eight arms and two tentacles are lined with hundreds of suction cups, each two to five centimeters in diameter and mounted on a stalk. The circumference of these suckers is lined with sharp, finely serrated rings. It is common to find circular scars from the suckers on sperm whales that have attacked giant squid.

Squid are cephalopods, and they usually live in deep waters, so photos of them are rare. In 2004, Japanese researchers took the first photos of a giant squid in its natural habitat, and in July 2012 one was filmed for the first time off the coast of Chichi-jima.

The Shelf Life series is produced by the American Museum of Natural History.

Video is distributed by agreement with the American Museum of Natural History.