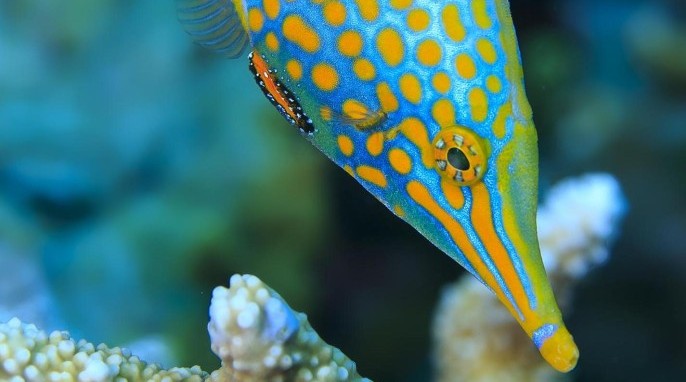 Harlequin filefish can disguise their smell to hide from predators. In fact, they can make themselves smell like coral instead of fish.

Researchers have found an ingenious coral-eating fish that can change its smell to hide from predators. It’s the harlequin filefish, and it camouflages its scent to smell like the coral it’s eating. In other words, it manages to smell like its own food, and not like something else’s.

“By feeding on corals, the harlequin filefish ends up smelling enough like its food that predators have a hard time distinguishing it from the surrounding coral habitat,” explains Rohan Brooker from the ARC Centre of Excellence for Coral Reef Studies (Coral CoE) at James Cook University in Queensland, Australia.

“For many animals vision is less important than their sense of smell, because predators often rely on odors to find their prey, even visually camouflaged animals may stick out like a sore thumb if they smell strongly of ‘food’,” Brooker says.

The ability to chemically ‘blend in’ occurs in some plant-eating invertebrates, but this is the first time this type of camouflage has been found in a higher order of animals, such as fish.

Philip Munday from the Coral CoE says the ability to chemically disguise itself is a great advantage for the harlequin filefish. “The harlequin filefish shelters among the branches of coral colonies at night, where not only does it look like a coral branch, it also smells like one, enabling it to remain undetected by nocturnal predators,” Munday says, but adds: “However, the filefishes’ cover is blown if it shelters in a different species of coral than the one it has been eating. Then, the predators can distinguish its presence and track it down.”

According to Doug Chivers from the University of Saskatchewan, who also worked on the study, “A finely-tuned combination of visual and chemical camouflage may be an effective anti-predator strategy that helps the fish to avoid being eaten.”

RELATED: SEAHORSES GIVE A WHOLE NEW MEANING TO “DAD BOD”

The harlequin filefish uses its camouflage skills to the fullest extent. Not only does the fish confuse its potential predators, it matches the smell of the coral so closely that the small crabs living on the coral branches can’t distinguish the fish from the coral. Munday says this is a remarkable example of how closely animals can be adapted to their habitats.

“This is very exciting because it opens the possibility of a wide range of different animals also using similar mechanisms, right under our noses,” Brooker says.

This research is published in the journal Proceedings of the Royal Society B.