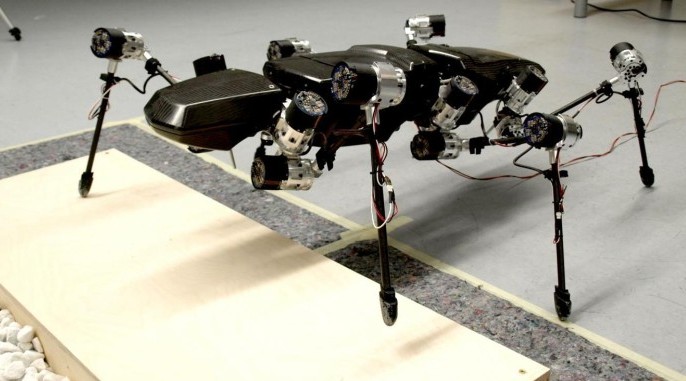 A research team at Bielefeld University in Germany has taught the only robot of its kind in the world how to walk. Designed to be stick insect-like, the walking robot is called Hector has elastic joints and an ultralight exoskeleton.

Hector is the result of an interdisciplinary project at the Center of Excellence Cognitive Interaction Technology (CITEC) involving researchers from the fields of computer science, biology, physics, and engineering.

The walking robot is equipped with plenty of sensors, enabling it to learn to walk much like a real stick insect. Hector has 18 elastic joints in its six legs, which enable it to walk over uneven surfaces. According to Axel Schneider (head of the university’s Biomechatronics research group and one of the coordinators of the project) the elasticity is comparable to the way muscles act in many biological systems.

“However, elasticity alone is not enough for Hector to be able to walk through a natural environment containing obstacles,” Schneider says. “The challenge was to develop a control system that would coordinate the movements of its legs in difficult surroundings as well.”

Jan Paskarbeit, a CITEC researcher who developed and built the walking robot, says: “All sub-systems have to communicate with each other for the robot to walk without any difficulties. Otherwise, for example, Hector might have too many legs in the air at one time, become unstable, and fall over. Moreover, the legs have to be able to react to collisions with obstacles. We have dealt with this by implementing a reflex behaviour for climbing over objects.”

However, Hector isn’t finished yet. Eight research groups have joined together for three years at the CITEC Center of Excellence, in a large-scale project to improve the walking robot. By 2017, it will have a greater number of abilities.  Currently, the researchers are working on equipping Hector’s front section. In a sense, they are trying to build a head for the walking robot, and they already have a prototype with two lateral cameras and two tactile feelers. Both the visual and the tactile systems are inspired by those of insects.

The CITEC project is being coordinated by Axel Schneider of the Biomechatronics research group and Volker Dürr from the Department of Biological Cybernetics at the Faculty of Biology.

This new robot follows hot on the heels of new micro-robots for search and rescue missions, helpful household robots from MIT, and the robots that work at Amazon. A video about the new walking robot research project is also available in German.