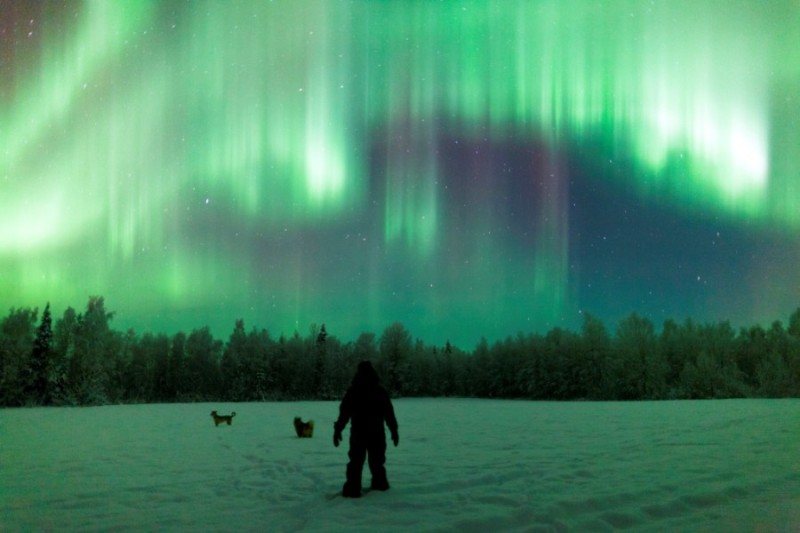 A roundup of articles all about the amazing Aurora Borealis, or Northern Lights. Find out what causes them and where to see them.

The Science Behind the Aurora Borealis

The aurora borealis (the Northern Lights) is much more than a pretty light displays in the night sky–it’s a perfect blend of solar wind and magnetic fields. The northern lights, or aurora borealis and southern lights, or aurora australis are fascinating effects of science. In fact, the aurora phenomenon is not unique to the Earth. We have observed aurora in the upper atmosphere of Jupiter and Saturn with various spacecraft and ground-based telescopes. Learn about the fascinating science behind the aurora borealis. READ MORE

Debunking the aurora myth: What causes an aurora?

A common misconception about the aurora is that it’s formed by particles streaming straight from the sun. When the solar wind hits Earth’s magnetic field, the wind slows down dramatically, creating a shock wave called the bow shock.  The bow shock diverts the stream of charged particles (and the magnetic field it carries) into paths that run alongside Earth’s magnetic field.  In certain spots, the solar and planetary magnetic fields point in opposite directions, and reconnection takes place.  The resulting new field lines — a combination of the sun’s and Earth’s — are swept back toward the magnetotail. READ MORE

Many Inuit tribes believed the Northern Lights to be spirits playing a cosmic ball game with the skull of a walrus and, proving that there is an exception to every rule, one perhaps very remote tribe held the opposite to be true. In their culture, the walruses exacted a terrible revenge on humanity by reversing the roles and playing a similar game using a human head.

Today, we know the exact scientific cause of the Northern Lights, we know where they originate, and what causes the colors and movement of Mother Nature’s remarkable light show. READ MORE

Photographing the Northern Lights in Iceland

Photographer Steven Spence chased the aurora borealis, or Northern Lights in Iceland and captured some fantastic photos. Find out how he did it and enjoy the shots he took throughout his journey. Seeing the northern lights, or aurora borealis, has long been on Steven’s bucket list. In March 2018 he took a break from work and traveled solo for some weeks. He headed to Iceland (also on his bucket list), to see the Northern Lights and come away with a spectacular collection of photographs. Now you can join Steven in exploring the beauty and science of the Northern Lights.

The mechanisms behind the formation of the northern lights occur throughout the year, but most of the displays they produce are faint. The lights are washed out by the bright sky during daytime and thus invisible to our eyes. Auroral displays can be seen best from an hour or two after sunset to an hour or two before sunrise. The longer the night, the more opportunities an observer will have to see the northern lights. Therefore, the best period is between the autumnal equinox in September and the spring equinox in March, with the peak being around the winter solstice in December. READ MORE

Join Jess Fraser and Leah Mallen on their trip to Alberta, Canada to film a documentary about aurora chasers who had discovered a new phenomenon in the night sky, we didn’t know what to expect. As Canadians, they knew that auroras were light displays caused by solar wind. The pair were familiar with the famous Northern Lights. They imagined that the hobbyists documenting these lights in the night sky would be passionate photographers, but didn’t realize just how talented they would turn out to be.

For years, the Alberta Aurora Chasers, an intrepid group of sky gazers scattered across western Canada, have been documenting a curious ribbon of purple and green light in the night skies when out photographing the Northern Lights. Extending for hundreds to thousands of kilometers and appearing for 20 minutes to an hour at a time, the Alberta Aurora Chasers photographed this celestial phenomenon believing it, at first, to be a proton arc.  READ MORE