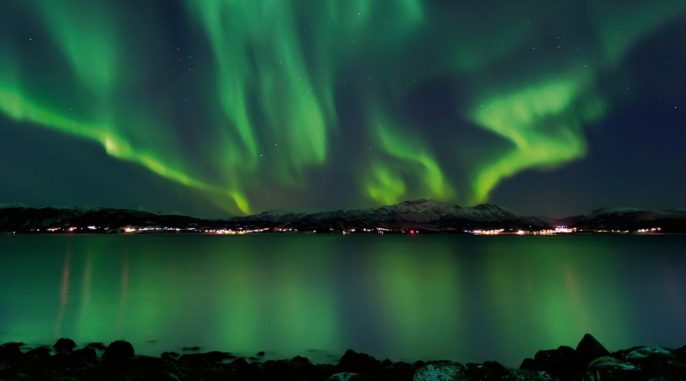 Why do we see aurorae at night? Considering only the solar wind is not enough to really understand what causes an aurora.

A common misconception about the aurora is that it’s formed by particles streaming straight from the sun.  This graphic, published by USA Today, offers an explanation that’s probably similar to one you’ve heard before:

The graphic focuses primarily on the solar wind, or the continuous flow of plasma — a high-temperature mix of charged particles — from the sun.  But while the solar wind is essential to understanding auroras, this is not really what causes an aurora. There are other factors involved in creating these celestial light displays. By only considering the solar wind, we leave some key questions unanswered.  For example, why do we see the aurora at night (when we’re facing away from the sun)?

Before we can tackle that, we need to recognize that charged particles aren’t the only things the sun sends us.  The sun is actually a giant magnet — and just like an ordinary bar magnet, it has a north and a south pole, with invisible magnetic field lines stretching from one to the other.  As scientists first discovered in the 1800s, electricity and magnetism have a very special relationship with each other.  A defining feature of this relationship is that electric charges can’t cross magnetic field lines.  Instead, they spiral around them, like this:

You can think of the particles as being “trapped” by the field lines.  And that’s precisely what’s happening in the solar wind!  Bound up in the plasma are bits of the sun’s magnetic field.  Earth is a giant magnet, too, and ultimately it’s the interaction between the sun’s magnetic field and Earth’s that leads to the aurora.  The underlying mechanism of that interaction, which transfers energy between the two fields, is known as magnetic reconnection.

The idea behind reconnection is fairly simple:  magnetic field lines meet, break off, and form connections with other field lines.  But what does that mean, exactly?  Have a look:

Each magnetic field line has a direction (as indicated by the arrows).  By convention, we say that a magnet’s field lines extend from the north pole to the south pole.  (Fun fact:  the Earth’s geographic north pole is actually its magnetic south pole.) Reconnection occurs when opposing field lines come into contact.

Now let’s jump back to the USA Today graphic.  See how Earth’s magnetic field is depicted there?  It’s a gray circle, with Earth in the middle.  In reality, it looks more like this:

The process is a bit like swimming breaststroke in an endless pool within the ecliptic plane.  We’ll explore that analogy further in an upcoming post.  Stay tuned!

What Causes an Aurora?

So why does aurora happen when we’re facing away from the sun? Reconnection also happens on Earth’s night side.  As the energy from the solar wind is transferred into the magnetotail, it interacts with the charged particles already trapped there.  When opposing field lines approach one another in the magnetotail, a portion of the magnetic field pinches off into space.  The rest, meanwhile, snaps back toward us.

As the charged particles accelerate toward Earth’s poles, they pick up even more energy.  Once they slam into the atmosphere, that energy is transferred to the atoms they encounter.  But the atoms can’t hold on to that extra energy for long — so they re-emit it as light, and that is essentially what causes an aurora to appear in the night sky.  The color of the light corresponds to the amount of energy absorbed by a given atom, as well as the type of atom it is.  Oxygen, for example, can produce either green or red emissions, whereas nitrogen’s are generally violet or blue.

These emissions are what we perceive as the aurora.

Now you know the real story:  magnetic reconnection in the magnetotail is why you can see the aurora even when you’re facing away from the sun.  Nighttime auroras cannot be explained by the solar wind alone!  The magnetosphere is a complex jungle of plasma, and it’s the greatest physics lab we can actually sample so let’s make sure we give credit where credit is due!

—Kristine Romich interned in the Heliophysics division at NASA’s Goddard Space Flight Center in the summer of 2017.  Her research investigated the heating of the solar corona.  While at Goddard, she also began volunteering with the Aurorasaurus citizen-science project as a guest blogger.  Kristine earned her A.S. degree from the City Colleges of Chicago in 2016 and will continue her studies in physics at California State University – Northridge this fall.

This article was first published by Aurorasaurus.