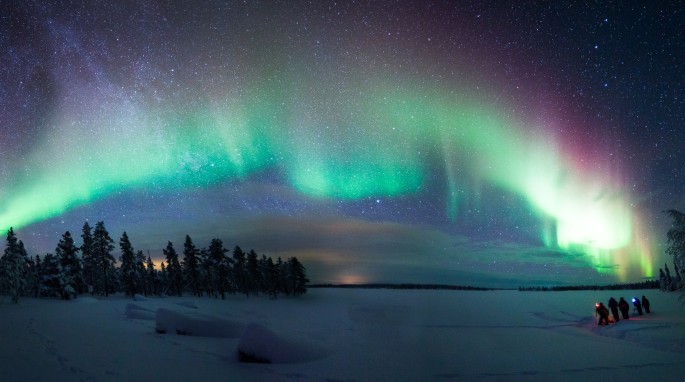 What causes the aurora borealis, or Northern Lights? Where can you see this amazing natural phenomenon? What did our ancestors think the aurora was?

Alistair McLean is the Managing Director of The Aurora Zone, a company that specializes in holidays searching for the Northern Lights. He has seen the aurora borealis more times than he can count and never fails to be enthralled by its beauty.

In the late 1980’s, a group of musicians calling themselves 10,000 Maniacs penned a song called “Planned Obsolescence.” The lyrics suggested that modern advances in science and technology will render “mysticism obsolete.”

I am reminded of this song pretty much every time I stand beneath the Northern Lights as they weave their mesmeric celestial dance. What, I wonder, would Stone Age or Iron Age man have made of the aurora borealis as it shimmered across the Northern skies?

Our ancestors had no scientific explanation for the aurora’s repeated appearance, so it’s hardly surprising that they created a wealth of myths and legends to explain its presence. Across Northern Europe, the lights were believed to be gods, torches guiding the recently deceased to the next world, celestial warriors, guests on their way to a heavenly wedding, and a host of otherworldly scenarios. Many Inuit tribes believed the Northern Lights to be spirits playing a cosmic ball game with the skull of a walrus and, proving that there is an exception to every rule, one perhaps very remote tribe held the opposite to be true. In their culture, the walruses exacted a terrible revenge on humanity by reversing the roles and playing a similar game using a human head.

These imaginative and colorful interpretations deserve to be retold time and time again because, as 10,000 Maniacs sang, science has no tolerance for mysticism. Today, we know the exact scientific cause of the Northern Lights, we know where they originate, and what causes the colors and movement of Mother Nature’s remarkable light show.

What Causes the Aurora Borealis?

An aurora originates from the more active regions of the Sun’s surface. These regions throw out huge bursts of electromagnetic energy known as Coronal Mass Ejections (CMEs) and send a stream of electronically charged particles (solar winds) into space. These solar winds can be directed in any direction, and it is only when they head towards Earth that we witness an auroral display. What happens is that the electronically charged particles collide with the gases in our atmosphere causing the atoms and molecules in those gases to become “excited” before returning to their normal state. It is the period after being excited that causes the aurora borealis, because the atoms and molecules release energy in the form of light as they calm down and return to their original condition.

Another important factor to consider is the altitude at which the particles collide with our atmosphere, because different gases create different auroral colors. Most auroras are various shades of green due to the fact that the majority of particles collide with oxygen at an altitude somewhere between 100 and 200 kilometers. Reds, which are less common, generally appear in the wake of larger solar events and are a result of the solar wind colliding with high altitude oxygen, whilst blues and purples are the result of a collision with nitrogen which predominates at a much lower altitude of approximately 60 miles.

Of course, standing on a frozen lake somewhere north of what we now call the Arctic Circle, our forefathers lacked our scientific understanding of what was occurring overhead. Therefore, it’s kind of reassuring that today, with all our technology and all our high-tech monitoring, even geophysicists struggle to predict whether an aurora will occur until about two hours before the actual event.

The problem for aurora chasers is that Mother Nature still has a few tricks up her sleeve. Solar winds, originally directed at the Earth can be blown of course as they cross the frozen expanses of space. Even more frustratingly, when the electronically charged particles do collide with the gases in our atmosphere, blanket cloud cover or simply the time of day might completely obscure even the most violent and spectacular auroral displays (the Northern Lights are not visible during daylight hours).

So, it seems that despite our modern-day understanding of the aurora borealis there remains some mystery and speculation regarding this wonderful natural phenomenon and, to this day, some of the more mystical thinking regarding the aurora remains. For example, there are some Sami people who will not whistle at the lights for fear of being whisked away. Among some people in South East Asia, there remains a belief that a child conceived under the Northern Lights will lead a happy and prosperous life.

Even with the application of our most advanced scientific technologies, there is always more to learn. In the case of the aurora borealis, 10,000 Maniacs might want to rethink their lyric–perhaps mysticism is not quite obsolete?

Do you want to learn more about the Aurora Borealis? Check out this roundup of articles all about the amazing Aurora Borealis, or Northern Lights. Find out what causes aurorae, where to see them, and how photographers capture them.