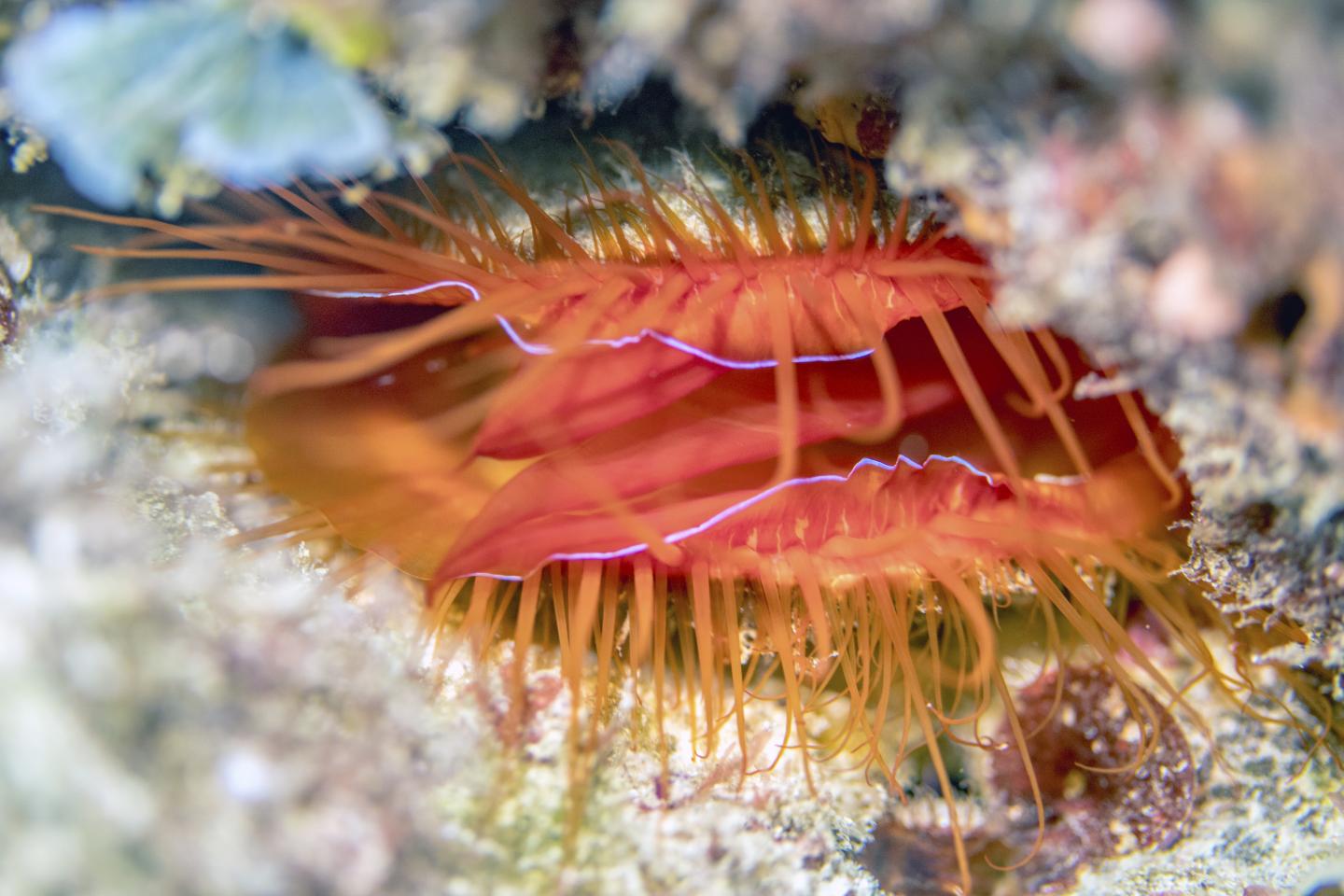 Dazzling bright-red tentacles first lured Lindsey Dougherty to the study of disco clams, which are found in coral reefs in the tropical waters off the coast of North Sulawesi, Indonesia. In a recent study, Dougherty’s research team found that the disco clam’s colorful tissues are noxious (unpleasant or distasteful) and are involved in its chemical defense against one of its predators. This is the first study to demonstrate that bivalve tissues can chemically deter predators.

Most bivalves, such as clams, mussels, and oysters, are dull in color, and to avoid predation they simply rely on their hard calcium carbonate shells. But the disco clam, Ctenoides ales, is brightly colored and produces flashes, much like the disco ball that inspired its name, increasing its rate of flashing when predators are around.

The flashing in disco clams is the result of tiny reflective silica nanospheres in half of the tissue, explains Dougherty, an evolutionary biologist at the University of Colorado. “The other side doesn’t have these tiny spheres, so it appears red (or dark) at depth.” During flashing, the disco clam waves both sides of the tissue back and forth, and as the silica nanospheres reflect light, they resemble “tiny biological disco balls,” Dougherty tells Science Connected Magazine.

While we might find the red color attractive, could the red tissues actually serve as a warning signal to predators to deter them from eating disco clams? Do the colored tissues taste awful to predators? These are some of the questions Dougherty wanted to explore.

To find out, her team conducted experiments by studying the behavior of the disco clam in the presence of its predator, the peacock mantis shrimp (Odontodactylus scyllarus), a wild-looking species that itself features a wide array of exotic colors. The researchers studied the food preferences of the peacock mantis shrimp and examined the chemical composition of the disco clam’s colorful tissues compared with its white inner part to see if those red tissues are indeed noxious.

When a disco clam was attacked by a peacock mantis shrimp, it opened its shell to display its brightly colored tissues, whereas the palatable Manila clam (Venerupis philippinarum) never opened—although the mantis shrimp easily cracked it open and ate it. But upon physical contact with the red tissues of the disco clam, the mantis shrimp reacted with excessive cleaning of its mouthparts and appeared to go into a state of immobility for about 15 minutes; these reactions were probably due to the noxious chemicals in the tissues.

To experiment further, the team presented peacock mantis shrimps with skewers containing a choice of bright red meat of the outer tissues of the disco clam or white meat from the inner muscles. The mantis shrimps preferred to eat the white inner tissues as opposed to the red mantle tissues. Interestingly, they still ate only the white parts even when the experiment was repeated in the dark with the red color not visible, and then again in the light with the white tissues dyed red.

This observation was surprising because the mantis shrimps “didn’t seem to have an issue with the tissue based on color alone,” Dougherty says, stressing that her team needs to investigate further “whether the red coloration and the flashing deter predators.”

Chemical analysis of the disco clam’s tissues revealed that the composition of the colorful outer tissues was very different from the white inner tissues. The white tissue was more similar to that of an outgroup of edible thorny oysters. What stood out most were peptides in the colorful tissues, which the researchers believe could be responsible for the disco clam’s noxiousness.

But pinpointing precisely which compounds caused the noxiousness was difficult because most of the compounds found were not already listed in databases, explains Dougherty, adding that there is plenty of room for further research. Are the peptides made by the red tissues of the disco clam? “It’s not clear yet whether the peptides are synthesized, but that is something worth investigating,” says Dougherty.

This study was published in the journal Royal Society Open Science.