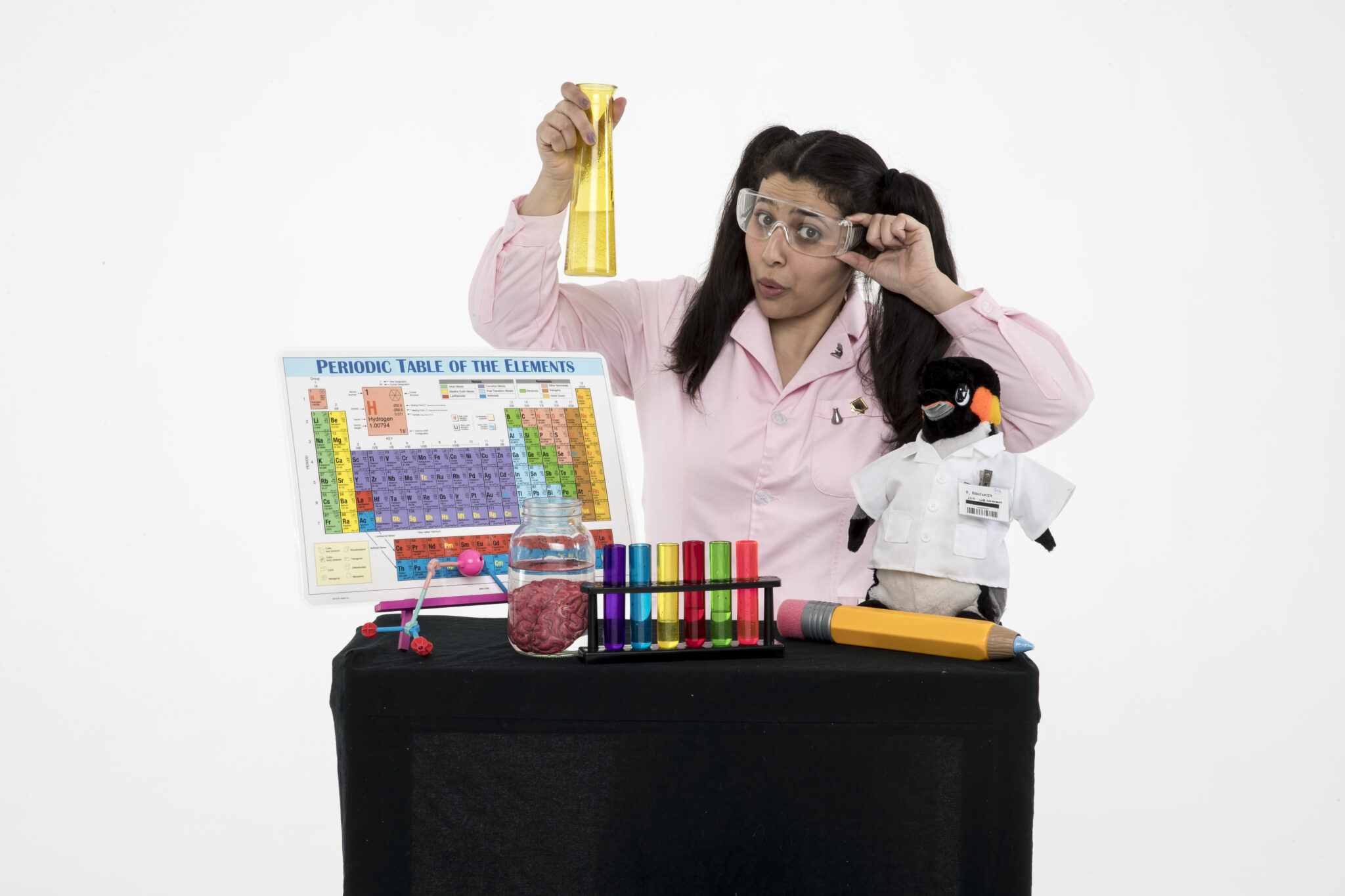 Jargie the Science Girl!, an interactive science performance, brings students up on stage to form hypotheses and perform experiments.

Since Jocelyn Argueta was young, science has been fun for her. It’s a creative endeavor that allows her to push forward and create new things. Most of all, it’s inspiring.

That’s one of the inspirations behind Jargie the Science Girl!, an interactive science performance produced by Phantom Projects Theater Group. The nonprofit troupe, based in the La Mirada Theater for Performing Arts, has been producing educational, hard-hitting theater for teens and youth since 1997. Their shows cover themes including bullying, racism, prejudice, and tolerance, and are performed at schools across California.

Jargie the Science Girl! is an hour of experiments, curiosity, and discovery, and no one show is like another. Jargie, performed by Jocelyn, is a scientist who invites audience members—mainly grade-school students—to ask questions with her and try things for themselves.

“[Theater and science] blend well together. Both ask you to think outside the box, be brave, and ask questions that you haven’t thought about before,” Jocelyn explains to GotScience about her love of the two. Outside of her theater life, Jocelyn has published research on Alzheimer’s and Down Syndrome in the Journal of Alzheimer’s Disease and has worked in the private sector researching allergy diagnostics.

“One of the stereotypes about science, especially among young kids, is that it’s bland or boring or hard, especially if you’re just learning out of a textbook. And there’s a misconception about theater, that it’s only creative. This highlights how fun science is, and how there’s work in theater.”

During the show, volunteers are called onto the stage to help Jargie solve a problem. There’s no right answer because there are many variables involved in the problem, and the volunteers get to choose which variables they want to change. Throughout the show, Jargie asks the audience about their hypotheses or analyses: What do you think will happen if we do this? What might have happened differently if we did this instead? Later, Jocelyn often talks to parents or teachers about the experiments so they can be replicated at home.

In addition to showing that science is fun, Jargie teaches that science is for anyone. Jocelyn, as well as her character Jargie, is a Hispanic, female scientist—an underrepresented population in the sciences. What’s more, the show can be performed in Spanish and English for bilingual audiences. For young students contemplating their futures, seeing diverse options represented on stage can instill confidence, reduce prejudices, and foster creativity—all beneficial for life and science!

Steve founded Phantom Projects when he was 17, after realizing that there weren’t many theater programs dedicated to serving his age group. Since then, Phantom has produced dozens of message-based shows to “educate, motivate, and inspire” teen and youth audiences. Jocelyn had been involved with Phantom for five years before she suggested they create Jargie.

“I didn’t feel completely fulfilled in the lab,” she says. “I loved what I was doing at Phantom but sometimes felt homesick for the lab. So I thought, why can’t I do both all the time?”

Steve was immediately on board. “I never thought I’d be doing a science show but I’m thrilled that we are. It makes an impact.”

Jargie the Science Girl! is starting its first national tour with performances at the Smithsonian Discovery Theater in Washington, DC, and is booking dates across the country. You can donate and help Jargie bring the scientific method to life at more schools and theaters. You can also learn more at https://phantomprojects.com/jargie.

All images courtesy of Phantom Projects.