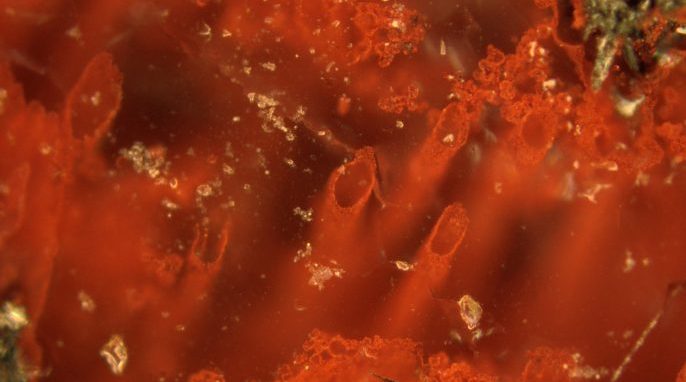 Researchers examining deposits from ancient hydrothermal vents in northeastern Canada have found evidence of microbial activity, possibly some of the earliest life on Earth. Hydrothermal vents deep beneath the oceans have long been thought to be where life originated, leading Matthew Dodd and colleagues to search where they did. The microbes were likely iron-metabolizing bacteria, and the structures they left are between 3.77 and 4.28 billion years old, making them even older than the microbes found last year to have lived near the surface of the ocean 3.70 billion years ago. We spoke with Dodd to learn more about the findings.

RELATED: LIFE ON EARTH MAY BE OLDER THAN WE THOUGHT

Matthew Dodd: Earth would have been a completely different place than today. It certainly would not have been as green as it is now—mostly barren, rocky surfaces pitted by impact craters. Little to no oxygen would have meant no ozone layer and no blue coloring to the sky. Extensive volcanism would have been common, and very small amounts of continents would have been present.

RG: Why did you search for signs of life where you did?

Dodd: We chose the Nuvvuagittuq belt because of its age—3.77 to 4.28 billion years—and because of the rocks there: pillow basalts with chemical similarities to mid-ocean ridge basalt and iron formations, long suspected to be the products of hydrothermal venting and precipitation. Given the long-standing theory that the origin of life happened in hydrothermal vent environments, we knew that these rocks were perfect choices to look for Earth’s oldest life-forms.

RG: How certain is it that these signs are an indication of life and not something else?

Dodd: The significant observations we made include tubular hematite structures and filaments attached to terminal knobs, all of which are also found in younger hydrothermal vent deposits. The first line of evidence of life are the intricate morphologies, such as twisted stalks and tubes preserved by millions of nanoscopic grains of iron. Their presence made these very convincing candidates for microfossils.

Yet, due to the history of controversy surrounding early life studies, we sought additional lines of evidence. We found these in the form of isotopically light carbon in graphite, associated with carbonate and apatite in and around the microfossils. Isotopically light carbon can be produced when organisms preferentially select the light isotopes to process carbon, suggesting these organic remains are biological. The association of organic carbon (graphite) and apatite occurs in younger rocks, where phosphorus-bearing, biological organic matter decays, releasing phosphorus into the sediments and forming the phosphate mineral apatite.

Furthermore, we found these same minerals inside granules which occur in the rocks hosting the microfossils. Granules can form from the decay of organic matter and, in younger rocks, can be found enclosing fossils of trilobites. It is these multiple, independent observations, which all occur together in the same rocks with the microfossils, that provide overwhelming evidence for the biological origin of these tubes and filaments.

RG: What kind of life would this have been?

Dodd: Based on the morphology of similar microfossils and organisms alive today in hydrothermal vent environments, these organisms were likely iron-metabolizing bacteria, which oxidized iron coming out of hydrothermal vents to provide energy for themselves to grow and fix carbon.

RG: How does this finding fit into the known timeline of life on Earth?

Dodd: This discovery demonstrates life had already become quite complex in shape 4.28 to 3.77 billion years ago, pushing the origin of life on Earth to near the beginning of the formation of Earth. In conjunction with another study, reporting stromatolites from 3.70 billion years ago, this finding shows life had at that time already evolved to live in both shallow marine environments—using sunlight to grow and form stromatolites—and to use iron minerals to grow around hydrothermal vents. This finding also fits with other studies that trace back phylogenetic trees of life and suggest the origin of life took place in iron-rich hydrothermal systems four billion years ago.

RG: Could this research have implications in searching for life on other worlds?

Dodd: Certainly. Because we’re finding evidence for life on Earth at a time when not just Earth but also Mars had oceans on its surface, we should expect to find evidence for life on Mars 3.77 to 4.28 billion years ago. If not, then Earth must have been a special exception. This also shows that hydrothermal vent environments were also one of the first places, if not the first, occupied by life on Earth. They should therefore be the priority targets to search for life elsewhere in the universe.