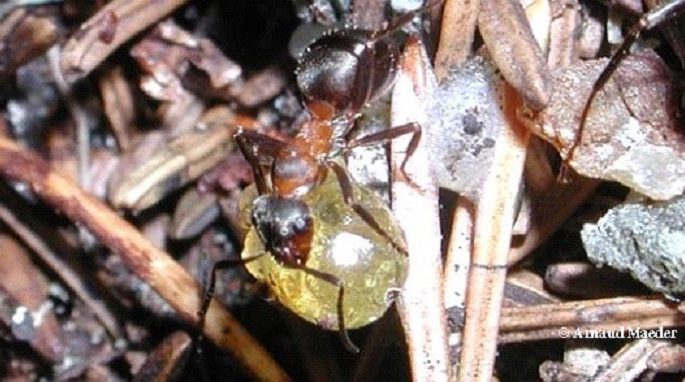 Wood ants are natural mixologists, concocting their own defensive cocktails, a new study finds. They protect themselves from infection by mixing self-produced acid with resin collected from trees to create a potent antimicrobial.

“This is an unusual case where insects combine plant defenses with their own chemical defenses to produce a potent antimicrobial substance,” says Michel Chapuisat, of the University of Lausanne, Switzerland, who is the senior author of the study.

We sanitize our homes using cleaners such as alcohol and bleach to protect ourselves from disease. Like us, ants and their brood are susceptible to all kinds of diseases caused by bacteria, fungi, and viruses. Because ants are social insects, a disease can spread quickly, turning into an epidemic and wiping out an entire colony.

[tweetthis]Wood ants combine chemicals, some of their own and some borrowed, to ward off infection.[/tweetthis]

It turns out that wood ants, Formica paralugubris, also employ this strategy. They collect globules of resin, which has antimicrobial properties, from coniferous trees and carry the globules back to their nests to protect themselves and their brood from bacterial and fungal diseases. Many coniferous trees secrete resins, particularly at sites of injury. Resin forms a protective seal around tree wounds, preventing the sites from getting infected. When resins harden and dry up, they become amber; many fossilized plants and animals are found in amber.

But the ants don’t stop there; researchers have found that they go a step further. Ants add self-produced formic acid to the resin to make it a more powerful antimicrobial agent. Instead of stingers, wood ants possess venom glands on their abdomens that are armed with large quantities of formic acid—derived from formica, the Latin word for ants—a strong poison and a foul-smelling antimicrobial. They ward off prey or predators by unleashing a spray of acid. Synthetic formic acid is produced for many purposes, such as preserving livestock feed, industrial cleaning, and tanning leather.

To test if ants enhance the antimicrobial properties of resin, Chapuisat and his team enclosed worker ants with resin and nest materials, such as twigs and small stones, for two weeks. They found that resin that had been in contact with the ants provided greater protection against the fungus Metarhizium brunneum—which can be deadly—than resin kept away from ants.

Does the addition of synthetic acids also provide the same antifungal effects? When synthetic formic acid solution mimicking the concentration and composition extracted from the venom glands of the ants was applied to spruce resin and inert glass, the antifungal activity of the resin was greater than that of the glass. This indicates that the combination of resin and formic acid produces a defensive cocktail whose antifungal effect, explains Chapuisat, “was not simply additive, but synergetic.” In other words, the combined protection of the acid and resin was greater than the sum of the separate protective effects of the acid and resin.

This is a rare example of “defensive mixology,” where animals combine chemicals from different sources to boost their antimicrobial effect. Although bees mix resin from various sources, it is unknown whether this protects them from microbes.

Timothée Brütsch, postgraduate student at the University of Lausanne, Switzerland, and first author of the study has more questions: “Does it ‘melt’ the resin and allow the release of resin volatiles in combination with formic acid volatiles? Is it a subtle combination of specific chemicals, and if yes, which ones in the resin? Does it allow the activation of older pieces of resin that have dried out?” The next step is to find out what the formic acid does to increase the antifungal effect of the resin.

Featured image: Ant carrying a globule of resin back to its nest. Photo by Arnaud Maeder.